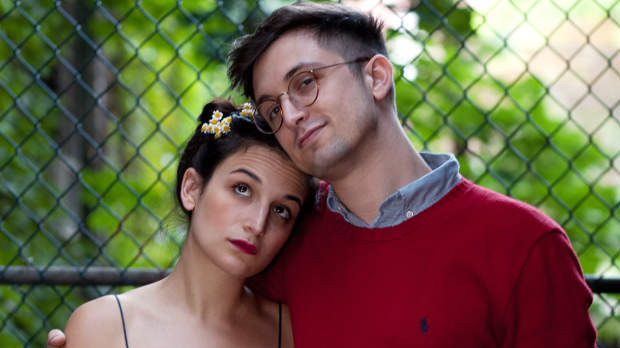 Dean Fleischer-Camp and Jenny Slate came up with the idea for their utterly charming and unexpectedly poignant lo-fi animation, Marcel the Shell with Shoes On, while at a friend’s wedding. Slate remembers, “We were in a hotel sleeping six to a room because most of us were really broke, and I was beginning to feel really small. I had been doing this little voice over the weekend, so I started talking like Marcel: [in a squeaky, slightly forlorn voice] ‘I’m just feeling really squished here.’” “We were both feeling unfulfilled in our jobs,” Fleischer-Camp adds. “We were coming from a place… well, I don’t want to be dramatic about it. It’s not like we were depressed.” “I was depressed,” Slate interrupts. “I’ll say that. A little bit. Sure. We were at a time in our lives when whatever we made would have a layer of gravity. And the real magic of [the movie] to me is that it has this layer of gravity, but it’s still about an adorable little shell.”

Just over three minutes, Marcel follows that little squeaky-voiced seashell as he describes his life — everything from parties with his friends, high cholesterol, to regrets, like not ever owning a dog. (Marcel simulates that experience by dragging around a little piece of lint on a hair.) The short is also winningly self-affirmative, with Marcel insisting that he likes himself and “has a lot of great qualities.” “It feels a bit raw and embarrassing,” Slate says about Marcel. “You shouldn’t tell people you like yourself.”

Since graduating from NYU Film School, Fleischer-Camp has worked as a director and editor and has made several shorts that have screened in galleries and in Brooklyn’s alternative comedy venues. Slate has done TV shows and film and is perhaps best known for her role as Stella on HBO’s Bored to Death and for the 2009 season of Saturday Night Live.

Fleischer-Camp and Slate shot Marcel in their Brooklyn apartment, premiered it at a local comedy show and, at friends’ urging, posted it online. “I didn’t want to put it on the Internet,” says Slate. “These shorts we make for comedy shows are sacred things and I didn’t want Marcel to be crapped on all over in the comments section underneath the video.”

She needn’t have worried. Within days the hits blew up, and then festivals started to invite the film: AFI, where it premiered; Sundance; and finally, their favorite, the New York International Children’s Festival. Now the duo are writing two Marcel children’s books and they expect a deal for a Marcel TV show to close soon.

Of their sudden stardom as short-form animators, both laugh. “We made it just to make it,” says Slate. “I mean, I’m a film and TV actress, and Dean is a feature director.” “I’m really an unskilled animator,” Fleischer-Camp adds. “It’s not an affectation. I’m a guy who drew and painted a lot, but before this I had only done live action.” As for that feature, Fleischer-Camp says, “I have this mission to explore Jenny’s darker side, so I’m writing this love story about rabies.” — Scott Macaulay