“Something Stupid, Like Ninja Turtles, Could Be Something Magical in the Future”: Miguel Llansó on Crumbs 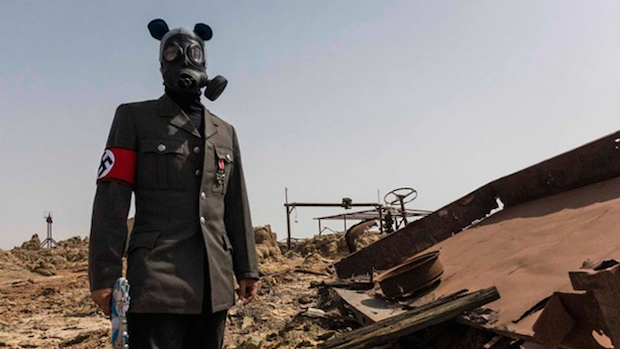 by Nicholas Vroman
in Directors, Interviews
on Nov 9, 2015

When a dormant spaceship hovering above the Earth comes to life again, strange things begin to happen in the abandoned bowling ally where Birdy (played by the diminutive actor Daniel Tadesse) and his partner Candy live. This sets Birdy off on a hero’s journey through strange landscapes and the detritus of contemporary civilization. Spanish director Miguel Llansó’s Crumbs, a post-apocalyptic surrealist Ethio-sci-fi odyssey, is filled with stunning landscapes, backdrops and characters – futuristic Nazi Teutonic knights, reliquaries to Michael Jordan, Santa Claus. It’s laced with a refreshingly nutty surrealism reminiscent of Alejandro Jodorowsky and Luis Buñuel, stunning cinematography by Israel Seoane and an amazing performance by Daniel Tadesse. Since its premiere at the Rotterdam Film Festival, Crumbs has been an audience favorite at a host of film festivals, winning awards such as New Flesh Award for Best First Feature Film at Montreal’s Fantasia International Film Festival and a special jury mention at the Los Angeles Film Festival. Crumbs is currently available on VOD and is having selected screenings across the US; more info here.

Filmmaker: What was the first thing that popped into your mind when you were thinking about making Crumbs?

Llansó: I think the first thing was Daniel Tadesse, the actor. He’s not the model of standard Hollywood movies. He’s not Brad Pitt. But at the same time for me he’s Brad Pitt, because he’s more beautiful than Brad Pitt. He takes you to another world with his body, with his ways. He takes you this world of Crumbs, of things that are falling apart. At the same time, he’s a very kind guy, and very brave, and very touching. So I think Daniel is like the gate we can enter into this world.

The landscapes represent a possible future — not only a past that was abandoned, but a possible future that never was accomplished. When you see, for instance, the bowling alley, it shows a possible future that was interrupted. Spaces in the ’60s were so beautiful and were made for people. It’s not happening nowadays. The public spaces are taken over by commercials, by brands, by the different ways of capitalism expresses itself. During the ’60s you could find different kinds of spaces — these kinds of places that could lead the world to another reality, or to another future. Now these kinds of places are abandoned.

Filmmaker: Which I think is a classic sort of dystopian view — the great works of humankind have been destroyed and abandoned. Granted, maybe a bowling alley is not exactly the same as the Roman Colosseum.

Llansó: I don’t know. Did people from Roman times think it was a place for the future? The same as the pyramids. Today we consider these places magical places, or places that represent the past in a very awesome and incredible way. But those places were made by slaves, so all these symbols from the past always have two sides.

In Spain we have the place where Franco’s buried. It’s a big place, not built by slaves, but by convicts. So people ask, should we demolish it or should we keep it? The place is nice, the place is beautiful, but it’s a terrible symbol. Nazi monuments: should we destroy them? Should we keep them? What shall we do with Auschwitz? It’s a terrible place, but at the same time we have to keep history. So, it’s not about a good or a bad past. It’s about how the past changes and how are we going to keep it. And how are we going to reinterpret or rethink the past in the future. So something stupid, like Ninja Turtles, could be something magical in the future.

Filmmaker: Your basic theme is about the crumbs of civilization and how they’re reinterpreted or changed. We see the Teenage Mutant Ninja Turtles and a Michael Jackson record. It’s funny that they’re worshiping Michael Jordan. You use these images, which are kind of ironic and a little silly, and then contrast them with a warrior wearing a Nazi armband and other very strong images of 20th century evil. In your mind, are these equal in how we look at them and how we interpret them?

Llansó: In the sense of parody, they are equal. I think, in the world of pop, all symbols look equal. The key point of capitalism is to turn all symbols — all the potential symbols that could lead to history, could lead to rebellion, could lead to whatever it is — into merchandise. All this deactivation of the symbols is the main characteristic of the 21st century, where everything can be put at the same level, where you can’t go deep into history anymore. You cannot go deep into criticism because everything is a product.

Filmmaker: Where does Crumbs fit in with talking about this? Other than showing it.

Filmmaker: Yes, I think I feel that everyday.

Llansó: One of the most absurd things I’ve seen in my life… I was in Yemen once and I was in the lobby of a hotel. I saw two girls in burkas watching a Paris Hilton show. The girls, they were completely like, what is this girl doing? The world that Birdy and Candy live in is the same world. One of my feelings is that Birdy goes on his hero’s journey only to find that everything is pretty meaningless, yet he has love at the end. A pretty simple story on that level. He tries to put some kind of sense in his life, the same as we’re all trying to do. We grab all this shit going around, all this randomness, all these symbols that take us nowhere. But because you’re a human being, you try to put some order on to it and you start to think that the symbols refer to you. That’s why he starts his trip. He starts his trip trying to find meaning in his life. And at the end, maybe the meaning was easier than all the pyramids that he builds. His mental pyramid that takes him nowhere. At the end, it’s love, simply love. Not a imaginary love, not a romantic love, not a Hollywood love, but simple love. You are not superman, but it’s OK. It’s not a happy ending. It’s a skeptical ending, which is — you’re not a god. You’re not God, but it’s OK.

Filmmaker: I don’t know if that’s so skeptical. I find it a sweet ending. He comes back to his paradise, rejecting the rest of the world that has no meaning to him anymore. He finds himself, he finds his love.

Llansó: Yes, it’s like The Odyssey. It’s the journey of the tragic hero. The tragic hero is someone that has to discover himself, to make a trip, to try to discover himself and go back home. And when he comes back home he’s another person, because he has changed during the trip. He’s not like the epic hero of American movies that has to kill someone, or beat someone or just accomplish a goal, whatever goal it is. He makes it or he doesn’t. This is the typical structure of American movies. You put a goal at the end. So he makes it. He doesn’t make it. But Crumbs is different.

Filmmaker: Ethiopia — why did you go there? Why is Ethiopia interesting to you?

Llansó: I went there in 2008. I started working at the Ministry of Foreign Affairs. At the beginning I was very interested in Ethiopian runners. ‘Cause, you know, Ethiopia is always linked with famine, disaster, terrible things. So, there should be something good. I discovered two really great things — runners and music. It was like an adventure to discover that the most exotic things are friendly and are very close to your reality, completely different from Heart of Darkness. In Heart of Darkness, Conrad tries to show the dark side of the soul in going to Africa. For me it’s the opposite, going to the most exotic places, going to the strangest places, instead of finding the dark side of the soul, you find your friends.

Filmmaker: When you bring in this pop detritus — the Mutant Ninja Turtles, Michael Jordan, Michael Jackson — is that influenced by the contemporary reality of what life is like in Addis Ababa?

Llansó: Yes, completely. A friend of mine said, Addis Ababa is kind of lasagna, a lasagna city, because it has so many different levels. You can find bowling alleys and places from the ’60s, and you can find very modern concrete buildings. Dubai style is taking over. We’re now living in this globalized world where the most important thing is not — definitely in Addis Ababa — it’s not culture. It’s not criticism. It’s not art. Luxury homes and malls are what they’re building. This is the standard. Of course you can find some intellectuals and people who really care about other kinds of realities and cultures, but it’s a minority. The big mass of people is going to build concrete buildings and… bathrooms, especially bathrooms. It’s a pity, but it’s like that. Economic growth is not building Alexandria’s library.

Filmmaker: As Birdy goes off on his journey, Candy stays home. Early on in the film you see her making a sculpture. What does she represent to you?

Llansó: I tried to portray her as someone who is really wise, artistic. She’s trying to search for knowledge. So she’s really fascinated by the big, wise figures of humanity, such as Michael Jordan or Justin Bieber. She tries to follow the paths of the wise people, the symbols of mankind. And she dreams. Birdy dreams of being a superman. But she dreams of being the wisest person and to be the most creative person in the world. That’s what she dreams of.

Filmmaker: What are some of your influences?

Llansó: I share Buñuel’s spirit. Especially Un Chien Andalou and L’Age d’Or, because these movies are very punk and very critical, but they’re very funny movies. The spontaneity is there, randomness is there. Buñuel and Dali were creating automatically, with ideas that weren’t logical. It’s the same with the Marx Brothers. So in that way, I love Buñuel. Because through these random things, he discovered very real, powerful relations between things. And I very much like Tarkovsky’s landscapes, for instance in Stalker. I don’t like landscapes for landscapes’ sake. I like landscapes that are full of meaning. Stalker’s landscapes are full of magnetism.

And there’s another movie I really like. It really shocked me. It’s by Moustapha Alassane. He studied with Jean Rouch. It’s called the Return of the Adventurer [Le retour d’un aventurier (1966)]. It’s about a guy who comes back from America to his village, and he brings back cowboy culture. He and his friends start acting like cowboys. They start messing up everything. They go to bars and start fights with people. They steal horses. It’s a very funny, very surreal movie. I love this movie because I’d never seen anything like that before in Africa. And this inspired me a lot. This kind of freedom you can find from the movies of the ’60s and ’70s.

Filmmaker: Have you shown Crumbs in Ethiopia?