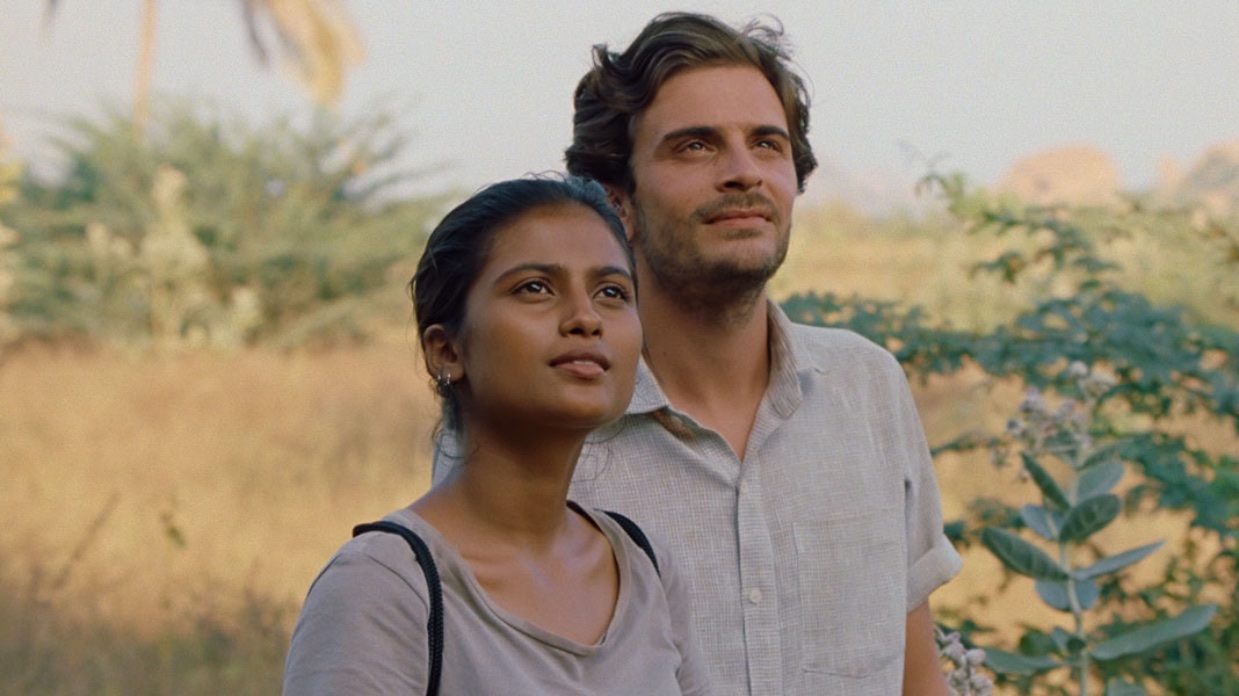 Mia Hansen-Løve is on my shortest list of favorite working filmmakers; after the extremely strong opening one-two of All is Forgiven and The Father of My Children, Goodbye First Love and Eden were whiffs. She came back strong with Things to Come, and now there’s Maya, almost certainly destined to be the most poorly-received of her films to date, in part for reasons that I’ll get into below. It appears, talking to a lot of colleagues, that they simply didn’t think the film was very good, but I liked it a lot: Maya‘s got unexpectedly strange energy, does a number of things Hansen-Løve hasn’t done before and pushes itself continually. The results strain cohesion, but I have no problem with ambitious excess as opposed to staying drily on-task.

Maya tracks war journalist Gabriel (Roman Kolinka) in the immediate aftermath of being ransomed out of his extended stint as a Syrian hostage. Hansen-Løve is a master of economical framing and editing, and the opening sequence has her strengths on full display. A master shot from a hotel bedroom, some 10 feet or so from Kolinka, observes him showering, a bruise on the right of his back conspicuous; he finishes, towels off and crosses into the bedroom. The camera pulls back, giving him some room to move past diagonally, his body now available for closer inspection before he moves back into the bathroom. The camera dollies in; Kolinka picks up a pair of scissors to snip off his beard, and Hansen-Løve makes her first cut when he does. It’s all very orderly and logical, entirely typical of her methods.

It’s also typical of her preference for elision and anti-sensationalism that the film begins in the aftermath of a hostage situation not once shown onscreen, only discussed. For the first 20 minutes or so, Maya tracks Gabriel through his homecoming, debriefing government sessions, and a not-so-happy reunion with his ex. So far so relatively normal, but then Gabriel decides to go to India to rebuild. He tells his plan to friend/fellow hostage Frédéric (Alex Descas), then offers him a ride. No thanks, says Frédéric; he’ll take the subway. Cut to: close-up of clean-shaven Gabriel driving, reverse shot of a road in India, cut back to a now-bearded-again Gabriel in the back seat of a car. He’s the passenger in another country now; this is as clean and quick a way to jump from one continent to another as I’ve ever seen, and I could geek out about this stuff all day.

Gabriel has a few plans in Goa while he’s decompressing: one’s to refurbish his grandfather’s long-dilapidated house, the other is to check in with his godfather Monty (Pathy Aiyar). Monty’s got a college-age daughter, Maya (first-time performer Aarshi Banerjee), of whom he’s wildly overprotective. Given the track record of French cinema as a whole, the will-they-or-won’t-they? question is implicit from the first time 30-year-old Gabriel and his considerable junior meet; the film is not in a terrible hurry to get to the answer. Meanwhile, a lot of things happen, some of which are definitely new for Hansen-Løve: the possibility of violence (a switchblade is briefly deployed), a moment that almost threatens to turn into a moped chase, and–most ambitiously–a montage sequence where Gabriel hits up three different Indian cities via extensive train journeys. This sequence is set to a guitar arrangement of a Schubert serenade (this one, a public domain recording that crackles nicely) and features an unfathomable amount of clearly unfaked, definitely not-stock trains, city streets etc. It looks like weeks and weeks of very real travel compressed into five minutes, and I don’t even want to imagine how much transit went into this–it’s like a very low-key companion to Rules of Attractions‘ infamous “Victor’s European Vacation” sequence. Other plot points include getting involved in the particulars of Goanese real estate, especially with crime related to condo development; as mentioned, there is an awful lot of stuff going on in this movie.

Because Hansen-Løve does not neatly alternate between a fixed number of narrative strands, there is no sense of what the film’s agenda(s) might be, or even if it has one. As such, I sat right up in my seat in sheer surprise a number of times; there was the feeling that anything might happen with no notice, which I find exhilarating. Still, it’s impossible not to note that this film is Problematic in at least three different ways:

As far as the POV question goes, Hansen-Løve addresses it head on in the press kit interview. “I’m not Indian,” she says. “There is obviously going to be some distance, which I did not want to lose.” I can accept that answer, though obviously your milage may vary. The other points: they’re all kind of true, but if we’re being honest I wasn’t too bothered by them, simply because I found Maya so exciting to watch. You could argue that the film’s opacity is true to its protagonist, who exploits a whole country and some people to get his mojo back, then moves to the next destination, but I’m not entirely sure the film should be required to pass some kind of concrete judgment on its character. In any case, I’m happy, on first pass, to be an outlier on a movie I found exciting and surprising.

Gear-switch: I am not, by and large, much for schadenfreude-fueled viewing. I have seen, and continue to be assigned on a freelance basis, more than enough garbage for review purposes that I do not actively seek out low-quality work for kicks; still, when I learned a few weeks ago that a film version of James Frey’s infamous “memoir” A Million Little Pieces was somehow a movie in the year of our lord 2018, I knew I had to set aside some time to resolve my morbid curiosity. My main purpose in going to see Sam Taylor-Johnson’s adaptation was to answer a perplexing question: why does this movie exist now? Cinema is not exactly short on depictions of alcoholics, and there’s always room for one more. What was so compelling about Frey’s story that it had to serve as the starting point?

I’ve been talking with people about this all week and was surprised how many people forgot about the whole Frey situation (or never knew about it in the first place), so, to recap: Frey’s 2003 book was the saga of his alcoholism and rehab, written in blatantly Hemingway-aspirational prose. There were no indentations or quote marks for dialogue, a lot of words were Randomly Capitalized, in the fashion so dear to the current US president; it was clearly, on some level, macho nonsense, which I knew even as a high schooler. Still, I read and even enjoyed it–enough to read Frey’s follow-up My Friend Leonard, enough to see him do a Q&A. Give that I was all of 17 at the time, I’m not inclined to judge myself too harshly for falling for the act. It subsequently emerged that Frey had made a bunch of stuff up, not least of all a whole fabricated relationship with Lilly, a fellow addict who allegedly committed suicide. Frey had to apologize to Oprah and do an apology tour of sorts. He then attempted to reinvent himself as a Serious Novelist, which didn’t take, so then he started a sweatshop of sorts, where he grievously underpaid a bunch of young writers for their labors in banging out potential YA franchises; one of them, I Am Number Four, actually took off.

In retrospect, I’m not that annoyed by Frey’s fraudulence; really, he just read the publishing room correctly, then took people for all they were worth, and who doesn’t like a good grifter? I do, however, highly object to his exploitation of young struggling writers (seriously, read about it). All that aside, I still couldn’t understand why this movie exists. The only way I could imagine it working is going full Charlie Kaufman, baking in the gap between truth and reality in some kind of framing device, but that’s not what happens here. Gallingly, there is an opening quote from Mark Twain that acknowledges the issue (“I’ve lived through some terrible things in my life, some of which actually happened”) and does absolutely nothing with it. The film sticks to Frey’s story (the credits punt on labeling it a “novel,” settling for the more generic “book”), fraudulent suicide and all. If I had to guess why Taylor-Johnson was attracted to the book, my most sympathetic read would be that the relationship between Frey (Aaron Taylor-Johnson) and Lilly (Odessa Young) recapitulates 50 Shades of Grey‘s masochistic dynamics, with two people getting involved in a sticky romantic situation that allows for plenty of opportunities to mess with each other’s heads. But I don’t actually believe any of that: the story director and star (both screenwriters on this) tell is that they liked the book’s energy, and that’s basically that.

On its own terms, the film isn’t great: there is e.g. a scene where Frey and a fellow rehab inmate commiserate while, no joke, someone plays “Everybody Hurts” on a piano in the next room. The film looks okay, and Taylor-Johnson throws in some dream imagery every now and then to keep it lively. What I’d forgotten about how the book works–what makes it different, and why you couldn’t make a generic version of it that didn’t involve optioning the rights–was a) the Lilly factor b) the major throughline being Frey’s aversion to fully embracing AA’s process. It was Frey’s proud narrative that he kicked drinking on his own terms, taking and leaving the steps as suited him; he had the strength and stubbornness to do it all himself, all he really needed (like any red-blooded American boy) was the love, however brief, of a good woman to keep him motivated. That’s why leaving Frey’s fraud out of the film was a mistake: the belligerence (real or constructed) he displayed in rehab was part and parcel of his persona as a writer. In interviews, he played that up. “I like pit bulls,” he said. “And N.W.A. And I love boxing. I think boxing is beautiful. The purity of fighting is a beautiful thing. […] I can write big fat books. But I’m not an effete little guy.” His stubbornness too was a part of his literary genius, which was going to save us all from a future ruled by Dave Eggers, or something. Pieces the film doesn’t downplay Frey’s anger, but there’s nothing in there about him as a writer: at the end of the day, he’s a mediocre dude with a spectacular addiction, a hollowed-out vessel of rage. Making zero attempt to translate the hyper-steroidal tone of Frey’s prose, Pieces ends up diluted, yet another trip to rehab and redemption, with some encouraging words from a therapist on the way; it will not remind anyone why this weird saga unfolded in the first place. Seeing the book’s final scene on-screen–Frey walking into a bar, ordering a pint glass of whiskey, picking up and smelling it, then walking away because he’s Strong–was an acid flashback to 15 years ago I never expected to be dealing with at this late date. Let us now not speak of it anymore.