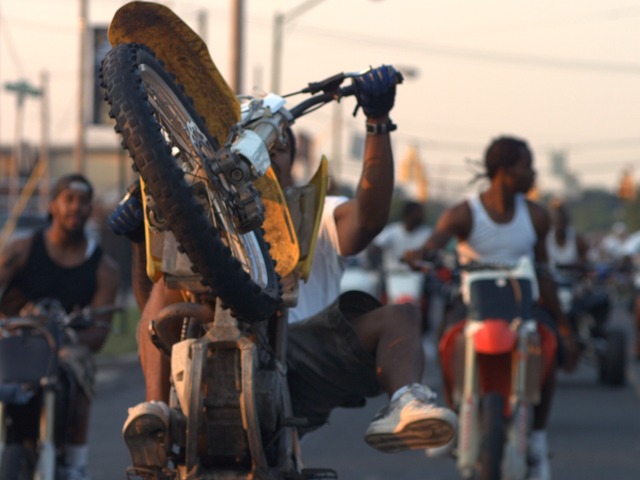 by Brandon Harris
in Directors, Interviews
on Jan 30, 2014

Having started life as a graduate film school project that was mostly financed on Kickstarter, Lotfy Nathan’s multiple Cinema Eye Honors-nominated documentary 12 O’Clock Boys, about a young boy named Pug who is immersed in inner-city dirt-biking culture, is an immediate and searing look at a particularly American coming of age on some of the country’s roughest streets. Pug’s mom, an ex-stripper named Coco, tries to steer him on a path of study and professionalism, urging him to consider training to be a veterinarian, but in this combative, crime-ridden stretch of West Baltimore, becoming an animal doctor is a remote dream. More immediate and fulfilling glory can be won in the local work of dirt biking, one which the film inhabits with gusto and little to no editorializing. As Pug becomes more accepted in the community of dirt bikers, his mother’s consternation grows, as the war for this young man’s future comes into stark clarity.

Clear eyed about the dangers that lurk, trapping inner city boys in cycles of violence, poverty and criminalization, Nathan nonetheless does his best to tell their tale at eye level, to understand the forces that motivate these young men. Police choppers are never to far away, gun shots not long out of ear shot. In the part of forgotten America, being a parent is pretty tough and as the film wears on, Coco becomes just as much of a focus as her boy, one whose very soul is being fought over. 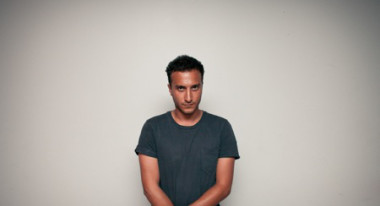 Filmmaker:  How did you settle on Pug as a protagonist?

Nathan: I was just sort of filming the culture at large: the action, the nature of it all, sparked my interest. From there I was always getting a lot of dynamic action stuff, these high-octane situations [that] were exciting in and of [themselves]. I was filming that stuff, but it was still for lack of a story. I was starting to get some subjects. I didn’t even really know that I needed a subject, as this was my first film. Of course I’ve seen movies, but I think it’s hard to put together just how much of a commitment you need to make to build character in a movie or a documentary. I met Pug in April of 2010. I was just kind of fishing around for material. It had been almost a year and a half by then.

Filmmaker:  You had been shooting for a year and a half already?

Nathan:  Yeah about a year and a half, here and there. But meeting Pug was a really exciting, totally new experience in the context of the group. It’s not that he was saying anything different, but the fact that he was not even 13 yet and sort of emulating the older guys. It was automatically poetic and, I think, very telling. He was this great point of entry [for the film], and for me as well. I had already buddied up with this Roger Stevens, the wheelman, so I was getting in with the group. But Pug was on the outskirts, so he was an interesting person to me as well. You know, the underdog kid who’s aspiring to be there, [but] he’s not there yet, I think that’s the best way to tell the story.

I wasn’t totally confident. Pug always had a wall up. He wasn’t giving as much exposition as I think a lot of documentarian subjects are expected to give. But there is a certain expression of his face that I think he actually did tell a lot that he thought was precious. That’s something that I think takes [time]—I had to trust and kept filming him, and things started to happen.

Filmmaker:  And how long do you think it took to gain the trust of his family? Was it difficult to get them to trust you?

Nathan:  Yeah, it was never really a matter of getting him to trust me, it was more me showing up to how much they were willing to share. They were very open. I mean, Coco was sharing her wedding story basically as we met, within 30 seconds, so it wasn’t really a matter of getting trust. Again, I don’t think it should be that way in documentary, ideally. I think when you’re showing up with some kind of big intimidating crew and you have such an agenda then, yeah, maybe you need to prove to people that you’re not a dick. But it was just me and a camera.

Filmmaker:  How long did you shoot total once you started shooting Pug?

Filmmaker: Did you cut while you shoot?

Nathan:  Yes. We were making the whole thing gradually from the beginning. So I had a little bit of footage in the first year. I was introduced to an editor and he made sense out of it enough to make this hyper two-minute trailer, which then got a little bit more traction. Then there was an eight-minute piece with all the dailies. I was always trying to make the movie. I had 40-minute, 60-minute cuts that were total nonsense, but with a lot of great moments consecutively. But, you know, you can’t just show that to somebody. They’re not going to figure it out for you. We were always pushing toward the cut and trying to make sense of the material and editing. You’re trying to court investors, you’re trying to start interest, you have to put those pieces together.

Filmmaker: Your film seems to inhabit the point of view of these young men as opposed to the point of view of an outsider. I think you do a wonderful job of kind of capturing it and giving it a certain dignity. Was that always what you were trying to achieve or did that come out of the type of footage you got?

Nathan: That’s a really good question. I think people will have varying perspectives on that. Some people seem to think that my perspective really shows through a lot; you sense the person behind the camera a lot and that sort braces it as well. When you bring up giving perspective to the riders themselves and the kids, I think it’s again because there wasn’t really a lot of separation and it was a long process. I would show up solo. I wasn’t very intimidating, consciously on my part. I was kind of passive, actually.

Filmmaker: I think that another filmmaker with a different sensibility or a different ideology might look on these kids in a much more negative light and shape the film in that respect.

Nathan: Oh, absolutely. Yeah, that’s interesting. I was also asked a lot why I didn’t show more of the perspective of the police, but I think that stuff is implicit. You know what an official police statement from the Baltimore Police Department would reveal. I actually went and filmed that interview with the police department’s head of public affairs, and there was nothing new there. It also wasn’t very subjective, it wasn’t very frank, and I wanted the whole thing to be frank and intimate. So there was no point.

Also I was never really trying to make an issue film to begin with, so that wasn’t my burden. I’m not a proponent of the group for any means, but I thought it would be interesting to give the perspective of a kid who wanted to join. I thought that it maybe explains to people on the outside why it exists. And Pug is such an identifiable kid, at least to me. I was taught in school what is really important to effect change is to start to have people identify with others.

Filmmaker: I’m curious what most surprised you about Pug and his family and these young men that you met in the process of making the film.

Nathan: That’s tough. I guess I was always surprised by the wisdom of some of these young kids. Understanding life and death, how fragile life is and how easy death becomes. I remember [Pug and Coco’s] dog got hit by a car right in front of them one night. The kids were playing on the street with Pug’s bicycle. We all went outside to go ask him to bring it back and the dog got out of the house, and then in front of all of us just got nailed by a car, and then again, and then again, and then again. Brutal. For some kids in the suburbs, they would’ve had a funeral, they would have to go to therapy probably. Pug and his siblings just had to adapt very quickly — in the next five minutes they were back at what they were doing. It’s not that they didn’t care, it’s just that they kind of expected that sort of thing to happen. It was legitimately tragic and it was surprising, but it also made sense.

I remember going to meet up with Coco one night. on her birthday. It was deep in east Baltimore, outside that bar where Coco’s dancing. Showing up there to meet her and her friends late at night, I didn’t know what we were going to film. But as we were showing up, there was a shooting and someone that they knew very well was killed. You could see that they were all shaken, but they were trying really in earnest to start talking about something else, to move through it as quickly as possible. You know, within minutes. Again, I don’t think it’s for lack of sensitivity, it’s just that you’re desensitized and you have to be. It’s like a kind of conditioning. It was really brutal and that was probably the most compelling thing that I experienced.

Filmmaker:  How did Pug and Coco — and the 12 o’clock boys who have seen the film — react to the film?

I think getting the word out for them is the thing that they really want. That’s why it wasn’t so hard to get in with the group, because they wanted to be seen and presented and it’s part and parcel of the whole sport. But then, obviously, there’s expectations that come with a big reception of the film. I’m trying to always be in touch with everybody who’s been involved and make sense of it with them.