Going on a Date with the Audience 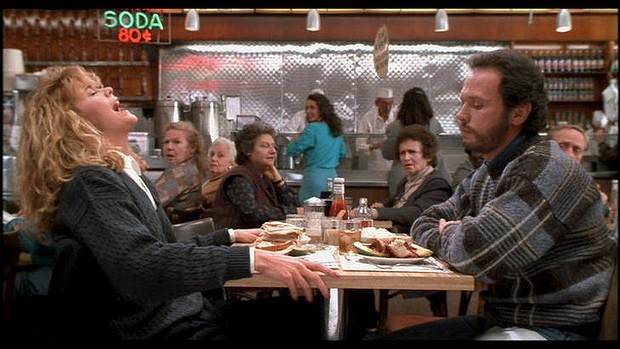 by Zachary Wigon
in Filmmaking, Screenwriting
on Dec 27, 2012

Something that constantly wins me over is when a movie doesn’t try too hard to thrust its narrative and/or message in my face. We all have seen films that announce, “Here is what the film means! Here is what matters to our protagonist!” in bold-faced, 48-point-type that gauchely screeches across the screen. An example we can all relate to is Paul Haggis’ Crash, which informs us, just in case we didn’t know, that a) RACISM IS BAD; b) some people who seem to be racists aren’t totally terrible; and c) some people who don’t seem to be racist may actually be racist. This point is made repeatedly and unambiguously throughout the film, crowding the audience without letting the audience have any thoughts of their own. We all know these films suck. And yet they keep getting made. Why? I don’t know. They may just be fated to plague us for all eternity, like the Kardashians. But I would like to do my bit in helping to stop Bad Filmmaking. And so here we are.

There’s an alternative style of narrative presentation that usually succeeds in drawing me in and instilling me with some faith in the filmmaker (at least to a point; style can only take a film so far). This style comes from a place of confidence in the story, confidence in the material and premise and the characters; it’s a narrative style that hinges on the presupposition that the audience will have to be an active participant, not a passive observer, in the film’s meaning. Films that employ this style may or may not follow a traditional three-act structure with a clear protagonist, antagonist, inciting incident, rising conflict, etc. – all the boxes that any of the “Screenwriting for Dummies” books out there insist you must check. Whether they do or don’t, what they will constantly do is operate according to their own logic and rules, rather than clearly bending backwards with contrived exposition and needless plot devices that are solely installed for the sake of making sure the audience “Gets It.” If these films can entice you with their subject matter and delivery, they will have you hooked, and you will be working as you watch them, working to piece together the story you’re seeing – and in the act of working to comprehend the narrative, you will have done part of the work that the traditional Hollywood film always does for you: you will have gotten yourself interested in watching the movie, rather than the movie having worked to interest you.

For a look at a confident film that requires the audience to do some work while also operating according to traditional narrative structure, check out Christian Petzold’s Barbara; the film gives the audience plenty of space to engage with the film, to enter the space of the film on their own terms. There’s nothing particularly experimental about Barbara, but the story is told with such care and respect for the audience that the observer feels like they are choosing to construct the film, rather than being bludgeoned by the point of it. Like a former writing teacher always used to say, the viewer wants to feel “As if you are in the hands of a master.” It’s the reason that often, failed Hollywood films don’t crash with as loud of a bang as failed art-cinema; in the failed Hollywood film, you can at least see where the film wants you to be. In a failed art-house movie, the disconnection between viewer and film can produce a sense of real anomie.

Forcing the audience to do some of the work, presenting your film with confidence and restraint – these attributes are essential for challenging cinema, but they also express a good attitude to adopt if you, dear reader, are about to do your best to impress some potential lover. In truth, constructing a good film is a lot like conducting yourself well on a date. (The analogy between film/audience and dating reminds me of a comment made by my friend Jeff Deutchman, who does acquisitions for IFC Films. He equated auteur cinema to masturbation and Hollywood cinema to prostitution, and said that he ideally looks for cinema that is the equivalent of consensual sex. It might have been a joke, but I think there is something to this.)

Before we worry about consensual sex, we have to get invited to the bedroom – and in order to do that, we have to go on a good date. The reason it’s so crucial to allow the audience into the film, as opposed to pressing your film’s themes and narrative upon the audience, is illuminated nicely when one conceives of the film/audience relationship as a date. You’re not going to tell the object of affection your whole life story on a first, or second, or even third date – you’ve got to leave some mystery in there, as Cosmopolitan magazine will only too happily remind you! You can’t talk too much or be too forthright about your wishes and dreams and desires and intentions – you have to give your date some space to figure that stuff out on their own! Otherwise, there’s no space for them to become engaged, to be drawn in – and when they’re presented with the whole picture up front, well, there’s nothing interesting about you anymore. Do you know how it looks when you give all your secrets away on the first date? Desperate! Narrative exposition = desperate date! Neither is attractive. You can’t come on too strong. If making a film is like going on a date, you have to keep the audience involved by making them do some of the work. If they’re not willing to do the work, they’re not right for your movie, just like how a date who isn’t down with your need to rewatch Satantango every Sunday probably isn’t right for you!

Additionally, on a date, confidence is attractive – and the same goes for storytelling. If you’re going to choose a narrative that makes the audience work, that withholds certain information and is perhaps structurally adventurous, your heart has to be in it – you have to mean it. Hollywood cinema can certainly be done by formula (though at its best it supersedes it), but art cinema requires originality and conviction, authentic decisions that have real reasons behind them. You can’t do art film by the numbers. If the audience senses that the film doesn’t really believe in its own structure or style, it will immediately be turned off, like a date who realizes that you’re just saying whatever you think they want to hear.

Plenty of how-to screenwriting books will tell you that it’s important to consider the audience every step of the way, and their systems – which are more or less perfected for a certain kind of storytelling – are tailor-made to keep the audience entertained from start to finish. But if one’s looking to make a different kind of film, Filmmakers would do well to conceive of their films as artworks build around revealing and restraining: am I coming on too strong here? Is it obvious that I have an ulterior motive in scene X? Does character Y remove any mystery from the film? These filmmakers will do well to conceive of the audience not as a sedentary receptacle, but rather an active, engaged participant who, if wooed correctly, will help collaborate on the meaning of the film. Meaning, like sex – as opposed to masturbation – is created from a back-and-forth between the two forces; neither party can achieve much all by themselves.