“Big Companies Can’t Change or Adapt… We are a Speedboat”: Director and VFX Artist Ken Locsmandi on His Under $1 Million, Lo-Fi Sci-Fi Beyond White Space 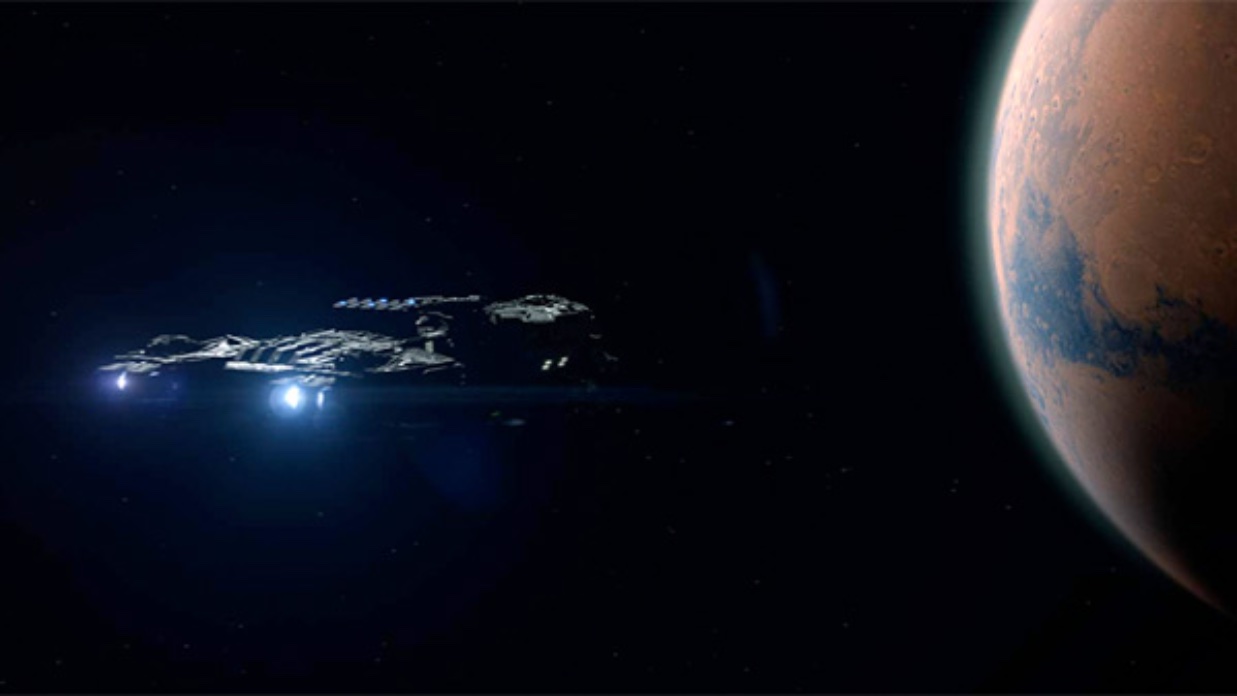 As the owner and visual effects supervisor at Filmworks, FX, Inc., Ken Locsmandi has worked on films by major directors like David Fincher, David O. Russell and the Wachowskis. In the last couple of years, he has expanded his company’s scope, producing his own films in an attempt to put his expertise and resources to use on independent work that can stand alongside studio productions costing literally hundreds of times what he has to spend. When I saw Locsmandi’s directorial debut, Beyond White Space, as it traveled around the film festival circuit this year, I was stunned by its level of ambition and scale; the movie holds its own against just about any other sci-fi film of 2018 in terms of its effects and cinematography. What makes Locsmandi’s achievement all the more astonishing is the fact that he shot on 35mm film and produced his feature for under $1 million — all while incorporating over 1,400 visual effects shots. I spoke with Locsmandi on the eve of Beyond White Space’s release — it opens theatrically and on VOD platforms December 14 from Vertical — to get the details on how he pulled it all off. 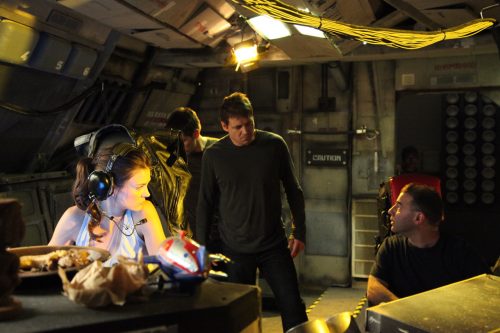 Filmmaker: In terms of the visual construction, Beyond White Space is a really confident and impressive debut. Did you always want to direct, or did that desire emerge recently out of your effects work?

Ken Locsmandi: I always wanted to be a filmmaker, and I saw a career in visual effects as a way of getting there. It was a better option for me than being a waiter. [laughs] I’m not unique 00 a lot of VFX people want to be directors but almost none make it happen. You have to do something extreme to get noticed. For Beyond White Space, the challenge was to compete with the Hollywood goliaths, studio films with budgets of hundreds of millions of dollars where the VFX can account for anywhere from one-fifth to half of the production costs.

Filmmaker: And how do you do that when you’re literally making your film for a hundredth of that or less?

Locsmandi: You have to adapt and exhaust every single option when it comes to using resources at your disposal — you have to not only be creative as an artist, but also as an entrepreneur and engineer. For instance, in order to populate hundreds of fully CG shots with asteroid fields, I visited a home gardening store in Los Angeles, looking for anything that resembled space asteroids. I purchased a few varied rocks for a dollar each and proceeded to create a simple set up in my garage involving attaching them to a rotating motor (mechanisms I created myself) and photographing them against a makeshift green screen. These rocks populated the backgrounds of Beyond White Space in hundreds of fully CG shots with infinite lighting scenarios, formations and camera angles. As a result, the film contains incredibly cost-effective asteroids that not only look photo-real, they are real. And there are countless other examples: Tupperware lids glued to walls later becoming screens displaying complex graphics, plastic helmets held in place with pool noodles over actors’ heads to create the mech-suit effect. Condensed milk, food dye and salt water in giant plastic tanks lit up by flashlights that later became space nebulas.

Filmmaker: I think that’s one of the things I responded to in the movie, that mix of CG effects and lo-fi, old school practical work.

Locsmandi: Yeah, the merger of practical and CG effects was integral to the completion of the film and played a huge role in keeping the budget contained, but I found that it had a lot of creative benefits as well. There were sets we put together in a day, built out of literal junk we found laying around, and then we used VFX to enhance what he had on hand. In a way it all worked within the grungy world of the film.

The same applies to the film stock Beyond White Space was shot on. We purchased the 35mm stock, made up only of short ends, for roughly $10,000. We were constantly switching out mags and dealing with a lot of dust that comes with shooting on old stock. But that choice really helped us maintain the gritty post-apocalyptic look in both live-action and CG that we were going for. People always ask me why I shot on film and then they watch the movie and see the quality of the photography and they get it.

Filmmaker: Even with all the resources at your disposal as the owner of a VFX company, I’ve got to assume there were difficulties doing all this for under $1 million. What were some of the hurdles?

Locsmandi: We had 18 shoot days, and though we sometimes got through 65 setups a day with two cameras, those shoot days were anything but smooth. Financing fell through around our fourth day, so we’d be raising money at night sometimes to shoot the very next day, as well as rewriting pages. We were also building sets while filming, so before each take we’d be calling out to hold the work on the next day’s set. It was incredibly chaotic. Then as the pressure mounted on the post-production side, it only became more difficult to keep up with the scope of the film. If you watch the credits at the end of a VFX-heavy studio film, you’ve noticed that the list of artists goes on forever, but in the case of Beyond White Space there were generally only about seven dedicated artists at any given time — a number that might sound absurd considering the amount of shots. But we have a very small team of talented artists who are able to see a shot through to completion, rather than handing off small tasks to dozens of different people within a single shot.

Filmmaker: How do you compensate for the lack of manpower when you’re using seven people to do the job of a hundred?

Locsmandi: We engineered our own AI-like compositing system in Nuke and Fusion, essentially a robotic compositor that would get us as close to the finish line as possible before the artist even touches the shot. The system, which we refer to as RoboComper, interprets 3D data, camera information and nulls from Maya and assembles them into the scene. It then automatically analyzes metadata that spits out a composition with proper spatial layering and depth of field, based on camera data, so the compositor’s work is a lot less labor-intensive. We had two animators animating the entire film, one of whom wrote the code for RoboComper. Because of this we finalized post-production with only about three or four compositors at one time.

Probably the most exciting development within Filmworks/FX was the transition to new rendering software. We were using VRay, which was taking about six hours a frame to render, and then made the jump to Renderman, which brought us down to two minutes a frame. With over 600 fully CG shots, this essentially saved the film and allowed us to complete the VFX within 16 months of restarting once we scrapped our 2K workflow and switched to 4K. We finished about 400 shots in 2K then started over in 4K, to meet our 4K delivery.

Since the completion of Beyond White Space, we’ve gone through yet another tech redesign, involving reengineering our own cryptocurrency miner to become a custom-built render machine we’ve named “Beef Box” due to its incredible rendering power. We’re now rendering creatures at 4 frames per second, whereas before the same creatures were taking minutes per frame. Beef Box is also is incredibly cost-effective when it comes to licenses, as a single license can harness 8 GPUs. Our system is automated in such a way that artists can bounce licenses around and render in near real-time. Therefore we’re always moving forward and spending a lot less time waiting on render queues. We have a closet full of CPU rendering engines. Approximately 2700 CPU cores. 20lb render blades stacked to the ceiling. Beef Box is 100 times faster than all of them combined.

Filmmaker: What do you feel are the advantages of your way of working vs. how this kind of movie would be done with more money and more people?

Locsmandi: The only reason we were able to finish Beyond White Space with all this new tech is because we are such a small team. Big companies can’t change or adapt. It costs them more money to switch software and train everyone than it does to just continue on the same trajectory. But we can figure out new pipelines and software and implement them the next day. You can’t turn the Titanic on a dime. We are a speedboat. The way I look at it, Beyond White Space is the film equivalent to building a house, reaching for the hammer and realizing its always broken; it’s not just about building a house, it’s reinventing the hammer, over and over again.