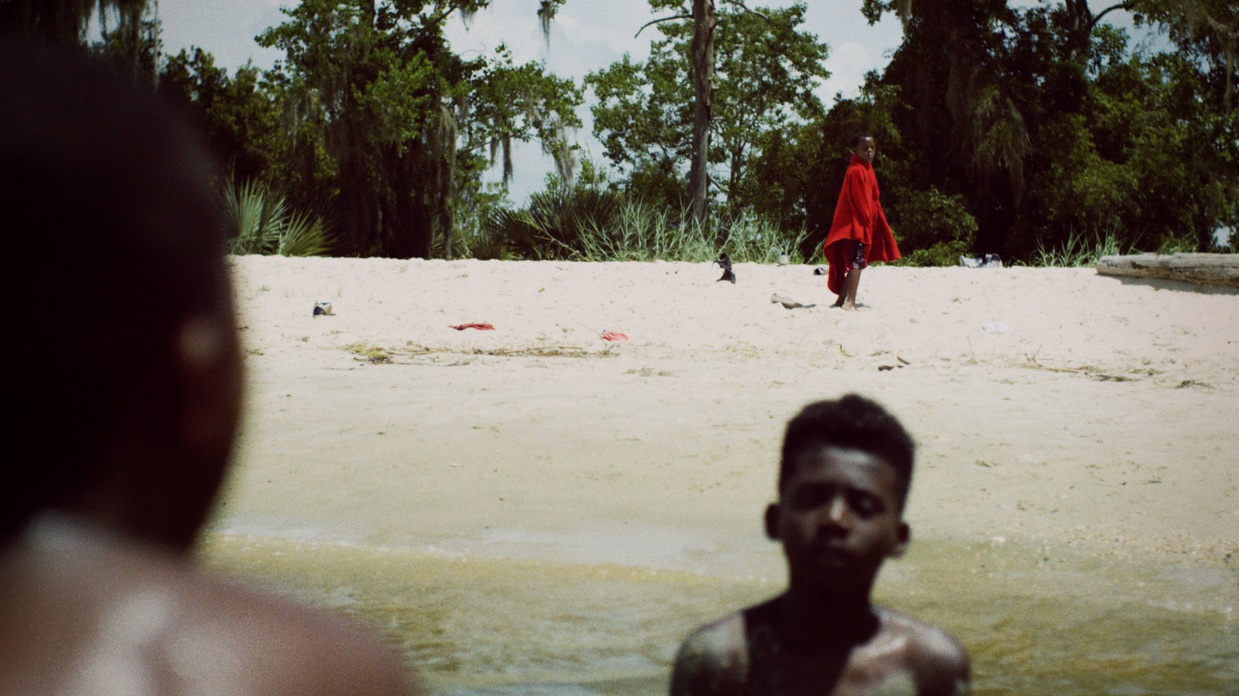 Getting off of a bus on Main Street early in the morning, I saw two men preparing a display car/advertisement for the day; one, melting ice off the hood with a giant blowdryer, the other buffing the surface for maximum shine. The minute production details of Sundance are a tacit thing that touches every piece of the experience. It’s as though each moment is a fully produced film set ready for action. After wandering through the desolate streets, I finally found the address I was looking for, High West Distillery, a space whose wooden interiors feel like the backdrop for a Wild West showdown. Small windows are perfectly framed blue and white triangles capturing the slope of a ski hill with an occasional person speeding past to disrupt time and space, the fresh food here a cleanse after a day of eating things solely unwrapped from plastic packages. The panel I walked in on was titled “Critical Minded: How Cultural Critics of Color Reshape the Story.” Critics ranging from The New Yorker (Doreen St. Félix) to an Amherst College author/professor (Pooja Rangan) spoke on the important role cultural criticism can play in changing dominant discourse and warned of the troubles of instant media. K. Austin Collins of Vanity Fair said, “Being culturally aware is a full time job,” a statement that felt true as I spent most of Sundance trying to absorb all around me to relay to others. One panelist noted that “[one’s] approach to memory is research” and “documentary has become human rights advocacy” — truths that evoked a strong sense of obligation and made me glad that I haven’t given myself over completely to the fleeting tweet.

I had to miss the last 15 minutes of this film because I had to make my way to the airport. Fortunately a woman I met on the street told me that nothing happens in the last 15 minutes of the film. She couldn’t have been more wrong. The five minutes before I left were just starting to unpeel a clandestine operation of puppet mercenaries and biological warfare of frightening, sweeping socio-political scope. Mads Brügger has been developing his button-pushing documentary cinema for years, beginning with an impossible conceit and carving it into perfectly edited scenes of subtle humor, staged showiness and journalistic discovery. His mix of eagerness and dismissal is hard to read at times, creating a dynamic of confused emotional tension with the subjects in his films. Brügger begins this latest film by warning of his own skepticism of the project, an investigation into the suspicious 1961 death of UN Secretary General Dag Hammarskjöld, and rides into the unknown as if on a maniacal, imperative mission. Also: What movie was that woman on the street even watching?

The Kansas City Film Office dinner was at a Mexican restaurant perched at the base of Park City Mountain Resort. I thought walking would be a good idea but realized what a literal uphill battle that was pretty quickly. When I made it, breathless, it was like another world. Upscale boutiques and ski shops ringed the perimeter of a courtyard, the center an ice rink awash in neon-colored lights with one lone child learning how to glide across the frozen water. Ski people milled about in various stages of gear. After turning an unassuming corner I was unexpectedly met with a ski lift. The dinner table was filled with guacamole and chips, margaritas were generously poured and guests, including the crew of the short film Crude Oil, which premiered at Sundance and was shot in Missouri, sat at a long table. The film industry is so rooted in the coasts but being at this event reminded me that there are so many places pulling inward from the shorelines — including Utah — to share in resources and talent. Between the large contingent of streaming services and the continued television presence at Sundance, geography seems to be less and less of a barrier on the consumption side, so why not the production side?

Clemency
US Dramatic Competition
Chinonye Chukwu / 2019, 113mins. / USA
Sometimes films act as pure character studies, each moment sent to serve the purpose of exposing a very specific human life experience carried by an exceptional actor. Such is the case with the Sundance Dramatic Competition Grand Jury Prize-winning Clemency, which stars Alfre Woodard as prison warden Bernadine Williams. Williams’s by-the-books demeanor has made her career one of pride and respect. A difficult execution leaves her shaken, sending her into a spiral of personal and professional conflict and adding to her already mounting sleeplessness and marital troubles. As another execution approaches, this time with its own set of tragic complications, Williams’s turmoil mounts. The film is a vehicle for Woodard alone, whose constant balancing of compassion and emotionless-action will send any audience into alternating waves of empathy and despair. Though the film goes hard in drama and emotional turns — and many of the supporting actors are hard to connect with — the film remains an effective display of how individual decisions illuminate larger moral landscapes and societal responsibilities. No spoilers here: see the film and marvel in this performance.

Velvet Buzzsaw
Premieres
Dan Gilroy / 2018, 109mins. / USA
I spent four years immersed in the horrors of the contemporary art world. The demons and deceit were abundant during my time there, and so often it felt like a caricature of itself, which is maybe why Velvet Buzzsaw moved me on a deeply personal level. Jake Gyllenhaal plays Morf Vandewalt, an art critic able to quickly make or break careers. Professional art hawkers vie for both relevance and press, hoping to attract attention and high prices for their wares. Artists themselves lie in a conflict-laden middle ground , producing work but unsure of how to maintain their purity/inspiration within all the superficial, greed-soaked mayhem. After the death of a neighbor, aspiring art dealer Josephina (Zawe Ashton) discovers his outsider art, a revelation that eventually leads to money and power-drenched hallucinations. The film never crosses into full-on camp territory — even when some narrative moments feel hokey or forced, they serve the very nature of the subject, reminding how artificial the whole notion of “the art market” truly is. Those looking for a straight-up horror/thriller ride might not be happy, but those who feel suffocated by the race to capitalize on creativity and also enjoy a few bold jump scares and jokes about Jordan Wolfson will be charmingly creeped out by this art world satire.

Historically thrown at a bowling alley, the Sundance Shorts Awards Ceremony and Party was held this year at Park City Film Studios, a relatively new cavernous soundstage far out from the madness of Sundance. I was pretty nervous that it wouldn’t be able to match the fun of bowling, pizza and beer that floated the old event. I shouldn’t have worried — the space was transformed into a sensory overload akin to a roller-skating birthday party but with a fully stocked Coppola bar. Yard games were scattered in a corner, foodtrucks wheeled indoors, the obligatory photobooth, twisted lights suspended from the rafters, balloons filled with LEDs growing like fungi in corners all set to a pounding playlist and massive crowd. I ran into tons of people at the event — Jamie Gonçalves was there as a Sundance Creative Producing Fellow for his upcoming feature doc Dos Estaciones, about a Mexican tequila plant owner; Kris Samuelson (a filmmaker whose Netflix Original Documentary short Life Overtakes Me was at Sundance this year and who first screened work at the fest 20 years ago) and Charlotte Cook (prolific producer and one of the masterminds behind the internationally minded doc collective Field of Vision) were there too. Shorts programmer Mike Plante, his voice hoarse after a week of Sundance, smiled at the crowd in his scratchy blue dad cardigan. The shorts this year were possibly the best yet, exhibiting strong talent at a rate much higher than many of the features on display: the people in this room are headed for filmmaking legend.

Feathers
Shorts, Shorts Program 1
A.V. Rockwell / 2018, 20mins./ USA
Fear, hope and truth linger with every action and word as young boys enter the screen, moving about a hollowed-out school along a lush and humid shoreline. With an amorphous-feeling structure, the film only hints at a narrative. Slowly the setting is revealed to be an experimental school for young black men, a place to keep them safe — safe from the compacted horrors of violence against their communities and against one another. The tactile beauty in the film’s cinematography matches the visceral energy and interior complexity exuded by the boys, who collide and commune with the fierceness of youth. Feathers is a film that urges responsibility and love towards a growing generation living in a state of fear and mourning. While watching it I thought about how, even though the film plays like a hazy, saturated dream, its subject is a very real and pressing one that is handled with supreme compassion. Though Feathers was well received at TIFF (even garnering distribution from Fox Searchlight) and the director is a Sundance Institute Fellow & Screenwriting Labs participant, I feel like it sadly fell under the Sundance audience radar this year.

I booked an Express Shuttle to and from the Salt Lake City airport, an easy/cheap pickup as rideshares and private cars jostle for dominance to transport Sundance attendees. It’s a shared ride that on the way in had two Salt Lake City residents returning from a New Orleans vacation and one man new to the area who didn’t know what Sundance was at all. On my way out of Park City, I stood outside the shuttle pick up in the cold. The Sundance festival director was on the steps waiting for his private car, along with two colleagues. An approaching woman referred to them as “the power trio,” and you could see the pride in the eyes of the youngest of the clan as he was grouped among with his film fest idols. As I stood there anxiously hoping I wouldn’t be forgotten by my discount ride, a grey Sundance sponsored car rolled to a slow stop in front of me. In the front seat sat Tessa Thompson, poised as usual, even more gorgeous in person. I quickly imagined what I looked like from the outside standing alone, mitten-less, balancing my cumbersome luggage so as not to touch the salted ground, clad in boots caked with a weeks worth of mud. It was the perfect parting goodbye before stepping onto a shuttle back into reality.