The Need for Speed: Tools to Help You Edit Faster 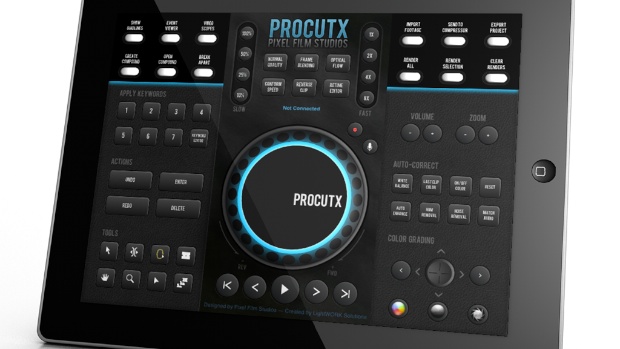 by Joey Daoud
in Filmmaking, Post-Production
on Feb 14, 2013

Anyone who’s joined the FCPX bandwagon will tell you one of the main draws is speed (or at least I will). FCPX let’s you do things quicker. But how we interact with the system (and computers in general) has its limitations.

For years the standard of working with NLEs has been left fingers planted on J, K, L, right hand on mouse. It’s not a terribly bad way to edit. Doing it for years you build up a fast muscle memory, but there are still keyboard tasks that stretch the limit of what you can remember, along with the span of your thumb and pinkie.

Is there a faster way? We’ll look at two options, one an iPad app and the other a program to customize the trackpad.

PROCUTX is a newly released app for the iPad that creates a control surface for FCPX. It’s from Pixel Film Studios, a company that makes some great FCPX plug-ins.

The app is on sale for $24.99 for launch, with a regular price of $39.99. Setup is easy — you install some free server software on your computer and a set of custom keyboard commands from PROCUTX.

The connection between the app and the computer is excellent. Scrubbing works in real time with no perceived delay.

The controls in the app are grouped based on task and cover a wide variety of areas. Front and center is playback with a dial for frame toggling. Above is a nice selection of options to adjust the speed of a selected clip. The left side of the app covers Compound Clips, Keywords, simple actions, and tool selection. The right is shortcuts for Import/Export, Auto-Correct, and Color Grading.

On the surface it’s a bunch of buttons for one-touch shortcut access, but to get to everything it offers you’d be doing a lot of finger contorting. To the new editor this can be a great time saver.

But I was interested in something that could replace either the mouse or keyboard while increasing my efficiency, and as of now PROCUTX can’t. It’s majorly lacking in control of making edits. The best you can do is use the blade tool, but to select anything you have to go to the mouse. Most notably absent is the ability to mark Ins and Outs as well as trim a clip to the time indicator.

One of the features I was most looking forward to was its color grading ability. It has button shortcuts to jump to either the color, exposure, or saturation control, which is nice. But as far as making adjustments it’s best for fine-tuning changes, not making broad adjustments like a color wheel. (I’ll say that this is a limit of FCPX and not PROCUTX).

For all the shortcomings of the app, keep in mind that this is version 1.0 and Pixel Film has been soliciting input and committed to actively releasing updates. One of the top priorities is adding more edit control, like Ins and Outs.

Also slated for the future are voice control and networking ability between multiple iPads to have a larger control surface. I’m curious what an entire iPad screen dedicated to color grading would look like.

However, PROCUTX really misses the mark in fully taking advantage of the platform it’s built on. Everything in the app could easily be duplicated with buttons on a piece of hardware. There’s nothing that takes advantage that this app runs on a display screen with multi-touch abilities.

Why dish out $1,000 for two more iPads when the interface could change based on the task at hand? Why have a button for every option when gestures could save hand movement and work quicker?

Bottom line — this is a great app for someone just getting started in FCPX but not a timesaver if you’re already good with the keyboard.

BetterTouchTool is an add-on for your computer that lets you set any gesture to trigger any command for any program. For free.

BTT really shines on the trackpad, which can detect all five fingers, but it can also control the Magic Mouse, a regular mouse, the Apple Remote, and some Wacom tablets. All you do is pick a preset gesture (or record your own) and assign what key combination or action it should trigger when performed. You can make it global, meaning it works no matter what program is open, or program specific.

Here’s some examples of how I use it for editing — three finger tap triggers Space, so I can play/pause. With the same three fingers, while touching the trackpad, if I tap with the index or ring finger, it triggers the arrow key for the respective direction I’m taping, letting me skim frame by frame. Tap the top left or top right edge trims the clip. Pinch in or out to zoom.

What I love about this is it lets you enhance something you’re already using. It’s not another device to move to, it’s sitting right beneath your fingers.

Sure, it can’t do nearly as much as a full control surface. You have to be careful you don’t go gesture overboard, or else you’ll start triggering all sorts of crazy stuff inadvertently just from basic scrolling and usage. That said, here’s a good preset collection from Jason Chong with FCPX controls.

I started using it on my laptop and loved it so much I bought an Apple trackpad for my Mac Pro. Remember, this is a program for OS X, not FCPX. You can use it for any application.

Slated for release in late April is CTRL+Console, an iPad app that works on a variety of programs. It was successfully funded on Kickstarter towards the end of last year and is incorporating gestures into its UI. Interesting to see if this really will make you a better, faster, stronger editor.