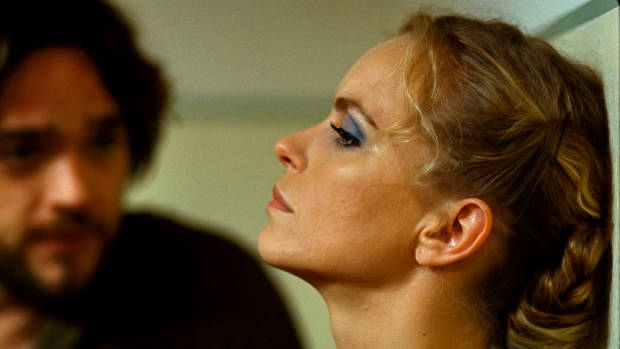 With Barbara, German auteur Christian Petzold (Yella, Jerichow) delivers one of 2012’s better character studies, a tense and sparing Cold War-era drama about a female doctor (Petzold muse Nina Hoss) who’s relegated to a hospital near the Baltic Sea after trying to leave the German Democratic Republic. It’s 1980, and the movie effortlessly conveys the period in all its stark unease. Honored at the 62nd Berlinale and serving as Germany’s official Foreign-Language entry for the 85th Academy Awards, Barbara sees its eponymous heroine grapple with the restraints of politics and her own fears in a manner as mysterious as it is handsomely realized.

Speaking via Skype between puffs of a cigarette, while sitting before wall-to-wall bookshelves in his Berlin home, Petzold, 52, shares the story of Barbara‘s inception, dishes on Technicolor and bad dialogue, and talks about his own family’s history and how this film struck a lot of personal chords.

Filmmaker: Barbara is a Cold War-era film, making it your first period piece. Why wait so long to set a film in the past?

Petzold: Well, 10 years ago I never wanted to make period pictures, because I had seen so many bad period pictures. It always looks a little bit like theatre, and the actors look like theatre and the costumes are very hard, and there’s no wind, and it’s always studio. And then I thought we had to make a movie about this vanished country, the German Democratic Republic, which was very near Berlin, outside my door, more than 25 years ago. So I started thinking about how to make a period picture this time.

Filmmaker: And your family also fled the German Democratic Republic, so there’s a very personal connection here for you.

Filmmaker: Has your family seen the movie?

Petzold: Well my father died, but my mother saw the movie two or three weeks after the premiere. I never go to the premieres with my mother because she’s so proud. And her pride, even a little bit, makes me nervous. My brothers told me that what I’m talking about, our past, was untrue, and that I was a liar. They are younger than me. I asked my mother if I was a liar, and if this was all something in  my head, and she said everything was absolutely correct. Everything I just told you. My brothers were a little bit shocked.

Filmmaker: And there was also a book that helped inspire this film. How much of the book would you say made it into the plot?

Petzold: There is an old novel, also called Barbara, that’s set during the Fascism of Germany in 1934 and 1935. It’s about a Communist female doctor who’s working at a hospital and working in the underground, against the Fascism. I read the book because I made a movie 10 years ago about living in the underground, and the book was part of the research. It was very important because it’s researching what happens to love in societies that are not only in crisis, but in breakdown—what happens to couples and the subject of love.

There was another book called Amusement Park, and it’s about the first few years of the German Democratic Republic, from 1949 to 1952, and the anti-Fascist peace dreams of this country, and about new women, who were over 18 and not just part of families and suburbs. And this book shows how these big dreams changed into nightmares.

Filmmaker: The film also marks your fifth collaboration with Nina Hoss. Can you describe how that relationship has evolved?

Petzold: Before our first film, Wolfsburg, in 2001, for me, she was a blonde actor. I had seen her in two movies before, and I didn’t recognize how intelligent and great she is. I must say, at first, I used her a bit like Hitchcock used the blonde girls. And then we worked together more, and during this movie, it was fantastic work. I think sometimes you can collaborate with actors. For some actors, it’s not good to have a collaboration, but with Nina, it’s fantastic, because we can talk, open doors together, surprise each other. Next August, we already have our sixth movie, which is also a period picture. I sent her the script, and we’re talking about the scenes. She’s part of our discourse team, and that’s fantastic—to have an actor who has great sense of the scenes, and no vanities. Filmmaker: Anything else you can say about the new project?

Petzold: It’s about a female survivor of the concentration camp Auschwitz. She comes back to Berlin to reclaim her life and her love. She doesn’t want to go to Palestine, or to the United States, or South America. She wants her life back. She wants to turn time back, to the time before the Nazis oppressed Germany.

Filmmaker: I was particularly struck by your use of color in Barbara, specifically red and blue. Can you discuss your color choices?

Petzold: Well, in just this last half-hour, I was walking through Berlin. It’s now December. The snow is very dirty, the air is very cold, the people are very, very ugly, and the lights on the streets, the traffic lights, are also very, very dirty. During the walk, I was thinking about how all the period pictures about the German Democratic Republic used this dirty snow, and this muddy light, to say that the people are cold there—in their hearts, and in their souls, and in the system. But, for me, the German Democratic Republic has the same temperature, and the same climate, and the same light, as the west. The feel of coldness is under the skin, and so we had to make a movie about the things that are under the skin, and not in the air. I think this was a little too primitive in most period pictures about Communism. Therefore, I thought about the Technicolor system, which Germany, like the U.S., had between the ’40s and the ’50s. It was actually invented, partly, in the German Democratic Republic. It had fantastic red and fantastic blue. So I had to use it too. I wanted fantastic red and fantastic blue. I wanted the skin of the women, and the skin of the men, and the color of the clothes, and the color of the shoes, to be great.

Filmmaker: The film is, of course, very immersed in the world of medicine and the goings-on in Barbara are far more authentic than what’s typically seen in, say, U.S. hospital dramas. Do you have any experience in that world that informed some of your decisions?

Petzold: I know so many serials about hospitals, but you never see work. You’re hearing dialogue. They use hospitals for dialogue and fantastical plots, because it’s always a question of life or death there. So you see actors with fantastical expressions on their faces and tears in their eyes. In the German Democratic Republic, and always in Communistic movies, there’s a world of factories, and a world of work. It’s the basis of all stories. In the west, the basis of all stories is the weekend, and the evening, and the bar, and the shopping mall. You never see work. So I was looking for a place where you can see the work and also have the dramatic structure of the story. I know a little bit about hospitals because I injured myself so often during soccer games. I remember there was one week when I broke my left leg, and I’m lying in the hospital, and I thought, “this is the reality of the weekend.” I just had to stay there. You can’t lie so good in the hospital.

Filmmaker: The narrative is quite minimal in terms of the way in which the information is delivered to the audience. Do find it frustrating watching films that insist on holding your hand and guiding you through the plot?

Petzold: I hate those movies. I hate dialogue, like “Why are you so pale?” “You don’t remember I was in jail for 24 years?” “Ah, yes, I remember you killed your  wife with a knife, but you always said you were innocent!” All of that. In the last two or three years, you can see that this bad dialogue is vanishing a bit from the cinema, including American cinema. The music is vanishing too—those shit music scores. Both of these things guide the audience in an infantile and regressive way, and I think the audience is getting more adult now. For me, say a woman is sitting on a bed. You don’t have any information, but you can see so many signs. You can the face, the gesture, the posing. You can see light. Something is happening. You are working your way into this picture with your imagination. This is, for me, an adult position for the audience. Ninety-nine percent of my life, I’m in the audience, too, and I’ve been liking it in the past few years. It started in the French cinema, then it went on to the Romanian cinema, and now it’s in the United States too. James Gray, for instance, is a fantastic director. He works like this.

Filmmaker: Barbara won you the Silver Bear at the Berlin Film Festival, and it’s also Germany’s Oscar entry. Do you often think about awards?

Petzold: Some awards I’m really proud of. Sometimes there’s a jury, like at the Berlinale, and I like those people—I like the work they have done. And when they give me an award, I’m a part of their story, and their discourse over the previous two weeks. And that makes me proud.

Filmmaker: What did you ultimately hope to achieve with Barbara?

Petzold: Personally, I always want to make movies that will create neighborhoods for other movies. When I was 18 or 19, I’d go to the movies, and I’d see one movie, and then one week later, I’d see another movie, and they’d have a relationship to each other, as if there was a neighborhood. During the last 20 or 30 years, the studios have a lot of economic pressures, and they make just one movie. And this movie is the world. Those kind of movies I don’t like so much. I like the movies of the new American cinema of the 1970s, or nouvelle vague, or neo-realism. All these movies together are one big movie. And I hope that Barbara will find a neighborhood.