“I’m Very Aware That in the Movies I Love There is No One Who Looks Like Me”: Lauren Domino on Producing in New Orleans 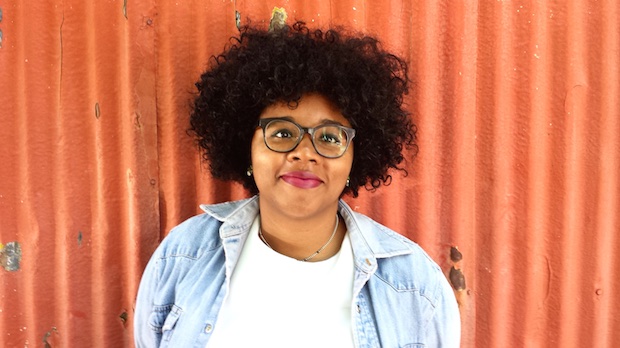 by Taylor Hess
in Columns, Interviews, Producers
on Jun 9, 2015

When Miles Davis moved to the Upper West Side in 1958, backyard jams with visiting musicians transformed the small block. His residency lasted about 25 years, so he was long gone by the time I moved in to the building next door. But I was there for the block party last year when the street was renamed in his honor. In spite of the loudspeaker recordings, I got to hear the street on jazz. And immersed in the throngs of his friends and relatives, I felt transported. The next day, walking past a new 24hr CVS on the nearby corner, the feeling was gone. The jazz was gone. All that was left of Miles was his name on a shiny green sign attached to a lamppost.

“Some cities just transport you,” says Lauren Domino, who’s worked for the New Orleans Film Festival, the AIDS Walk in San Francisco, rescue and reunification orphanages in Nepal, and non-profits, production companies and film festivals in New York. She has been writing and producing since returning to the place she calls home — the place where she was born and raised, where she attended college, and where she braved Hurricane Katrina.

Though I’ve never been to New Orleans, I can relate with how the city influences Domino. Some talk about the inexplicable feeling of a city as a vibe or an undercurrent; she laughs at sounding hippie-dippie, but calls it “magic” nonetheless. She encourages me to visit, and as someone who tends to value first impressions, I wonder whether I’d feel the city’s magic right away, if at all. I wonder if a city can inherently transport a person or if the person must first fill the city with personal experiences to then later feel the magic.

Take the thousands of brass bricks in place of cobblestones throughout the streets of Berlin. The Stolperstein are engraved with the names of those murdered in the Holocaust, in front of the apartments they once occupied. It’s a moving tribute, one that commemorates post-war Berlin, and one that affects me often. Certain benches in New York trigger a similarly intense reaction. Whether the impact is from the historical context of the stones or the personal memory from a bench is irrelevant. I feel transported, however secondary or first-hand the experience. My interaction with the place is what matters.

This is the magic of a city — to be transported from a memory on a bench, a stone on the street, or jazz on a block. It’s the chance to intertwine our narratives with history, to live with the experience of others before us, around us, and ahead of us. It’s no wonder Domino has chosen to also pursue her own creative goals now that she’s moved back to New Orleans, the city that transports her. What’s in a movie after all but the feeling of transport, and of course, a bit of magic too.

Domino has produced season two of web series Black Folk Don’t and the short film Just The Three of Us. She’s worked for the Columbia University Film Festival, Arts Engine-Media That Matters™, ESSENCE Festival™ and the New Orleans Film Society.

What drew you to film?
I grew up around free jazz — my Uncle Kidd is a well-known Avant Garde free jazz musician — so my scope of what it means to be creative and artistic is embedded in the belief that being an artist is most supreme. And being a movie lover was instilled in me at such a young age. My dad was an avid film-goer, so it was a bonding experience for us to watch films together.

You didn’t go to film school?
No, but watching so many films as a programmer for the New Orleans Film Festival was sort of my film school. I knew I wanted to work in film but I lacked the confidence to make my own work. So for years I was just adjacent to it, working on events, programming, and festival management.

What are you working on now?
I’m writing and producing a feature-length teen comedy with my really good friend and mentor Angela Tucker. She’s also directing. When we were working at the same company, everyone kept telling us we had to meet. We thought it was just because we are both black women with glasses and curly hair, so we were a little apprehensive at first. But we hit it off like a house on fire. Her mentorship and encouragement has helped me to pursue my film goals.

And now you have the confidence to make your own work?
I’m a person who defines myself through work, so my confidence builds the more work I do. But I still have good days and bad days. It’s so easy to feel inexperienced or not good enough. My initial thought even about this interview was, “I can name six kick-ass women in film working in New Orleans right now. Why me?” Better confidence is very much something I’m working on. Also, rather than finding a thousand ways to negate a compliment, I’m working on accepting and just taking credit where credit’s due.

You are also working on a doc series for Time Inc. right now.
Yes, I’m field producing one of six short films for Court 13. It follows four students graduating from performance art school, using them as a lens in post-Katrina New Orleans. As a field producer, I plan the shoots, I coordinate with the talent, I handle all the releases, I do the call sheets and I manage the budget. It’s a small team, so I get to bounce around creative ideas too. But mostly I’m planning and organizing.

Where were you during Katrina?
I was an RA at Loyola. I’m a person who takes work super seriously, so while my whole family evacuated, I stayed because I couldn’t leave campus while students were still there. We were told to put what we could fit in a pillowcase and were driven to a shelter in Baton Rouge. I heard on this small radio that the neighborhood I am from was completely underwater. Eventually, I was driven to Texas and finally saw the devastation of the city on a TV. It was a traumatic experience and a defining period of my life.

How would you describe New Orleans now?
New Orleans doesn’t really feel like the rest of America. It feels more European. There’s a huge emphasis on jazz and food, and being a good person is ingrained. It has its problems like all cities, but there’s a bit of magic to it that other cities lack. It was a difficult decision to leave my great job in New York behind, but I wanted the chance to do more creative work, I wanted to be closer to my family, and I wanted the possibility for a little more magic in my life. I’ve been back for two years, and I feel like I made the right decision.

Do you miss New York?
When I first moved to New York, I thought I’d never leave. But I grew tired of working 18 hours a day, and I didn’t feel totally fulfilled. So even though I’ve taken a massive pay cut to work in New Orleans, I feel fulfilled now in the work that I do and the stories that I’m helping people tell. I’m still as busy as I was when I lived in New York, but I’m not as stressed. New Orleans is a city where you work to live rather than live to work.

Is the booming film industry changing this landscape?
I grew up with the mindset that you’re born in New Orleans, you live in New Orleans, and you die in New Orleans. But now that the tax incentives are so great, there’s a huge influx of people moving into the city, so it feels more like a transient city. The city is changing quickly, and it’ll be interesting to see in a few years if it’s a good change.

How do you hope the film industry will change?
It will be great to go to a film festival one day where female filmmakers or films by and about people of color won’t be a side program, or part of some separate initiative, or a statistic to boast about. Or where a women’s panel will just be a panel about film financing without drawing attention to the fact that the panelists happen to all be women.

But until the day of color and gender blind equality, the demand for more female voices is getting louder and louder.
Yeah, and I love to see women in film, but I’d love to see more women of color in film, in stories that feel true. There are some amazing filmmakers of color producing indie work right now, but there’s such a void for stories of people who look like me. Imagine if you have a love of film and of the arts, but you grow up and don’t see yourself represented in media.

Growing up, were you conscience of not seeing yourself represented?
Absolutely I’ve been conscious of it. I’m very aware that in the movies I love there is no one who looks like me, and even if there is a black character, I can’t relate. I saw a presentation last year with writer and culture critic Imran Siddiquee about the ways we look at ourselves in media. What does it do to your psyche if you’re a young girl of color and you don’t see a love story with a character who looks like you? How can you imagine yourself as capable of receiving love? We have to create work where everyone can see themselves and feel represented.

It’s not just about diversifying the stories. It’s about humanizing them.
It’s so important as we look at America today with racial tensions at such a high that we need to show characters as full people and not stereotypes. The stories that people of color have to tell are not just relegated to the black experience. Stories need to be told through a variety of lenses so we can all connect, so we can all feel socially engaged and connected to people who don’t look like us.

Can movies inspire change?
I’ve done a lot of social issue and social justice work, but film is such a powerful medium. I believe it can really change the world. I may not possess the skills to start an NGO, but I can tell a story, and help other’s tell their stories. I’ll be behind the scenes, getting people their checks on time, whatever it takes. Because if I can play a part in changing the landscape, I’ll feel that I’ve made it. I’ll feel like we’ve all made it.