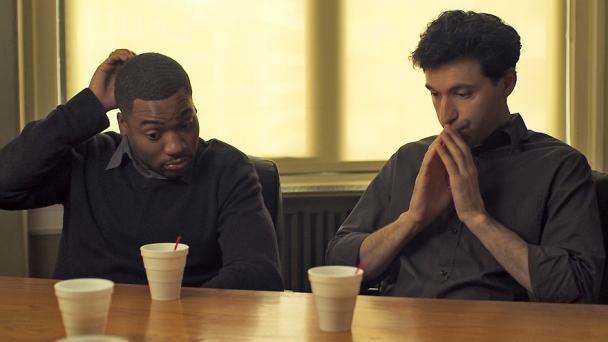 A genuine meditation on male friendship, the absurdities of indie moviedom and many different kinds of loyalty, Daniel Schechter’s Supporting Characters, a surprise hit at last year’s Tribeca Film Festival, sneaks up on you, its seeming limitations becoming its strengths over the course of its easy-going 87 minutes. Despite being shot in a fashion that recalls a comedy you might find on FX, Supporting Characters maintains an old-fashioned, craftsman-like quality about it; it’s written with feeling and humor that rings with truth, offering us characters whose lives are as complicated and full of ambiguity as our own.

Alex Karpovsky and newcomer Tarik Lowe have great chemistry as film editors Nick and Darryl, who are doing a “save job” on a feature for a depressive director played by a never-less-than-terrific Kevin Corrigan. Although our Rosencrantz and Guildenstern’s optimism and good humor gives way to potential conflicts over future prospects and formulaic romantic trouble (Melonie Diaz’s character just ain’t that into Tarik; should Alex stay with good girl Sophia Takal or fuck the needy blonde movie starlet-to-be Arielle Kebbel?), the picture has a true lightness; it isn’t ambitious in any sense and does its best to be honest to its intentions and kind to its audience. It also includes perhaps the last time you’ll ever see Lena Dunham as a supporting character, so hurry.

Schechter cut his teeth in the aughts as a screenwriter before turning to this micro-budget project as his feature debut. He’s a merely a couple weeks away from beginning his next project, a prequel to Quentin Tarantino’s Jackie Brown which stars Mos Def and John Hawkes. Supporting Characters opens in Manhattan on Friday.

Filmmaker: This movie is steeped in indie filmmaking world, especially the New York variety. Did writing it come from years of experience in the trenches?

Schechter: Yes and no. I was never a “real editor” in the sense Nick and Darryl were. I’m too lazy to do a day job. Also, frankly, I was too opinionated, and theoretically I suppose I was busy pursuing being a writer/director. But I could have been an editor; it’s certainly where my technical skills lie, and I did re-edit some films so those were certainly experiences I drew from, including the re-editing of my own movies.

Filmmaker: Were you able to put together the financing relatively easily or did you find it to be a long slog?

Schechter: Yes, easily. I had these two investors who were interested in making larger, seven-figure films, but they were certainly new to this. I basically said to them, “Look, do this for 40k and get your feet wet. Worse comes to worse, it’s a learning experience and you can see the entire process all the way through for the minimum price/risk.” Well, they bought it, and also we had a pretty good cast for that budget size (Kevin Corrigan, Arielle Kebbel, Melonie Diaz, Lena Dunham, Alex Karpovsky, etc.) I’m really grateful to them and lucky I found them so easily.

Filmmaker: Do you rely significantly on rehearsal? Improvisation? How do you know when you and your cast are ready to shoot something?

Filmmaker: The luxury of being “ready” wasn’t something most indie filmmakers have, but I did do much more proper rehearsing this time with my actors. About three full days where we put the script up on its feet, and some scenes remained exactly the same and others were entirely re-written in that process. On set, I’d say there was a little improv because the exact dialogue wasn’t something I was precious about, but the way we wrote was meant to feel pretty natural, so most of it was.

Filmmaker: You assembled a tremendous cast. Did you write the roles with each person in mind or did you start with Tarik and Alex and build around them?

Schechter: I started with Tarik and me. We wrote it together based on our friendship and our dynamic. Halfway through writing I had to think about who would play me and I hooked onto the idea of Alex, who I had seen in Andrew Bujalski’s Beeswax and Lena Dunham’s Tiny Furniture. My character was somewhat in between those two , as one was a jerk and the other one was a sweetheart so it just felt right, and no one really fought me on it. Almost everyone else in the film — Arielle, Sebastian Sozzi, Mike Landry, Kevin Corrigan — were roles I wrote specifically for those actors, who were friends and agreed to do it while I was still writing, thankfully.

Filmmaker: What are the advantages and disadvantages of working on a small budget like this?

Schechter: Many of both of course, but the first that jump to mind: Advantage, I could cast whoever I wanted. Disadvantage, I had to shoot in 12 days.

Filmmaker: Did you encounter a particularly low point during production when you thought the project wasn’t going to turn out as you had envisioned?

Schechter: No, I didn’t actually. I don’t attribute this to any great talent of mine, but more to tremendous good luck we had all through production with actors, locations, weather, etc., but also obviously a ridiculously dedicated crew and my savvy producers Tim Duff and Adam Der Aris. It was a major convergence of luck of nothing going wrong and good preparation. But of course, almost any time any filmmaker sees the first cut of their film, it’s a low point.

Filmmaker: Was there a significant difference between the film you envisioned and what you had once you’d completed production?

Schechter: Yes, originally, it was much more a romcom about relationships, both long and short term. But the core of the movie really ended up becoming about the relationship/friendship between Nick and Darryl, our main two characters, largely because the chemistry between Alex and Tarik was just so strong. I think it still says a lot about couples, but its much more dominantly from the male perspective than I originally wanted.

Filmmaker: What was the most difficult aspect of the film to make work in the editing room?

Schechter: I think the same with every film, just getting it down to its tightest, most efficient length. I think it’s rare anyone goes to a film festival and says, “I wish that film was longer.” It’s just incredibly difficult to hold an audience’s attention for an hour and a half on super low budgets with, frankly, not terribly well-developed scripts and mostly unknown actors. I think these films are best kept lean and mean and raw, as I never want an audience to feel their butts in their seats.

Filmmaker: If you had to do it all over again, is there anything you’d do differently.

Schechter: I would’ve tried to be funnier. On set, I had too much integrity, blatantly denying jokes that felt too “jokey,” so I could maintain a sense of realism, I guess. In the editing room, I was a total whore and took any joke/laugh I could find. I don’t know, hopefully that’s the right balance.