Can Hackathons Save Independent Film? 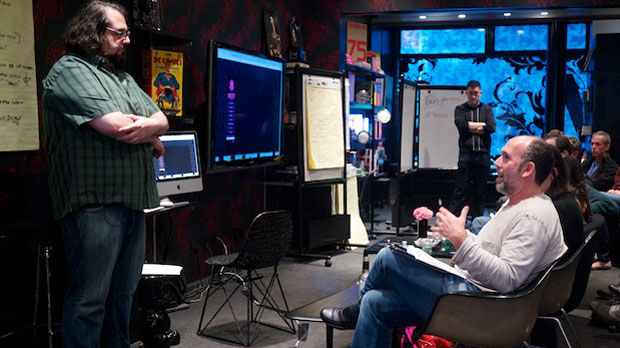 by Scott Macaulay
in Distribution, Filmmaking, Transmedia
on Oct 17, 2012

Technology, collaboration and the rewards of spontaneous thinking — hackathons harness all three in events that are equal parts meet-up and late-night college term-paper deadline marathon. These multi-day crash sessions are popular in the tech world, gathering strategists, designers and developers to produce everything from fleshed-out concepts to fully designed apps. But does the hackathon format have anything to offer film? Can the problems of independent film — challenges of audience-building, discovery, and monetization — find their solutions in such accelerated brainstorming?

Bond Influence and Strategy sought to find out this past weekend with Hacking Film, New York’s first film-centric hackathon. Participants gathered Saturday morning at The Apartment on Crosby Street, assembled themselves into teams, and then, on Sunday afternoon, presented their projects to judges and a small audience. Reps from various tech companies — GoWatchIt, Mashery, etc. — were there at the start to discuss the capabilities of their APIs. The teams were then charged, according to the Hacking Film website, with building “hacks that bring together technology, multimedia, and data to enrich the end-to-end movie experience. Hacks must improve the overall experience of seeking out, watching, and engaging with movies.”

The final Sunday session was introduced by Bond’s founder and CEO, Marc Schiller, who spoke of the “incredible disruption in distribution” currently underway. “It’s a difficult time,” he said. “Access to audience has never been more challenging because [that audience] is fragmented. The [new] models are still young.”

The first project presented was Film Mob, an “exhibition hack” by three employees of the sponsoring companies: Michael Lee (Director of Strategy at Bond); Colin McCabe (Mashery); and Jacek Grebski. The problem Film Mob attempts to solve is one familiar to anyone who’s tried to attend a movie in a big city on a weekend with a group of friends. Lines are long, you can’t find seats together, and one unlucky person winds up tasked with balancing a tray of 32 ounce drinks while navigating back through a crowded lobby. A smartphone concierge service, Film Mob buys group tickets, reserves seats and orders your friends’ refreshment choices, delivering them all through a single QR code presented by the group leader at the theater. For Lee, Film Mob has a natural appeal to both moviegoers and theaters. “By streamlining [the moviegoing process, we can increase volume,” he said.

Mike Caprio and Bruna Calheiros’ Grouvie was the second app, and it also addresses the group moviegoing experience. Whereas Film Mob seeks to streamline the transactions surrounding moviegoing, Grouvie uses what Caprio called “the lowest common denominator” of digital interaction (email) to facilitate its social aspects — planning, meeting up, and then finding a bar or restaurant afterwards to talk about the film. Employing the Facebook API along with cartoDB (for geolocational data) and the Rotten Tomato API through Mashery (for theater and movie info), Grouvie confirms a movie night out by sending an email to the group with theater and restaurant info.

The third project was the most ordinary — a simple soundtrack game by Lei Zhu that quizzes players with snippets of popular soundtracks.

Laure Parsons and Ganesh Ramanathan were next with Subtitlet, an outside-the-box solution for independent filmmakers seeking subtitling and translation services. Inspired by Google’s reCAPTCHA, a service that uses CAPTCHA (those annoying blurry words in boxes you have to retype to prove you’re a human on sites like Ticketmaster) to assist in book translation, Subtitlet does the same with very short movie clips, harnessing the crowd to create subtitles and translations for independent films.

“The Choice is Yours,” by DeVon Harris and Allison Hornstein, is a Choose-Your-Own-Adventure“-like branching narrative game using film clips. A short scene from a film plays, and you’re given two choices, each of which redirects action, theme or emotion in a different way. A demo was played using clips from films like Seven and The Shining, prompting one judge to ask, “Is this a mash-up app or a storytelling app for filmmakers?” “It’s both, replied Hornstein, who noted that filmmakers could use the app to distribute ancillary or bonus content.

After each presentation there was a short Q&A, with the judges asking questions about the potential demand for these apps, the audiences they address, competitors, revenue models, and the partners required to effectively scale them. As I sat there listening to the judges, I realized something about myself: If I were a participant at a hackathon, the first thing I’d need to do is censor my inner critic. I found myself nodding in agreement as the audience found challenges and flaws in these various start-ups. Have the Film Mob folks considered the additional labor required by theaters to police reserved seating? Isn’t Grouvie a bit like National Cinema’s Movie Night Out? Why did the Grouvie creators choose email as a platform? After all, young people are the ones who go to movies in groups, and they are moving away from email. (Retired people go to movies as groups too, responded Capri, and they are still on email.) What about rights issues, I wondered, thinking of both the soundtrack game and The Choice is Yours. And regarding Subtitlet, translation is as much art as science. Wouldn’t a filmmaker still need to employ a single translator to ensure consistency of voice? (The service will provide an initial baseline translation, Parsons told me, and will improve as it scales.)

But thinking about the Hackathon later, I realized that my criticisms were a bit churlish. After all, these ideas were conceived and prototyped in just 48 hours. They will, of course, need to revised and in some cases reconceived in the days ahead. But as any creative person knows, ignoring the negative voice inside you and taking the next steps on a promising idea can be hardest challenge. Through their compressed timeframes, hard deadlines and group collaborative process, hackathons propel you past your inner naysayer.

And, I ultimately realized, if you’re a creator at a hackathon, you don’t need to have all the answers. The judges demonstrated this with their awards, splitting the top prize (consisting of SXSW badges, $2,500 in development cash, and 12 hours of marketing and pitch consultation from Bond) between Subtitlet and The Choice is Yours and suggesting to the creators that they team up and merge their projects. Third prize went to Grouvie, who also received a prize (a Sony Bloggie Live HD camera), sponsored by Mashery, for the project that best used one of their APIs.

So, what was Schiller’s final take on this first New York hackathon? “The heart [displayed by the participants] surprised me,” he said. “I know it sounds strange to say that it’s about heart, but the effort people put in to think about the state we’re in and to come up with solutions was impressive. New York needs this more often. Seeds here were planted, and I hope this will be the start of something. We’ll definitely do it again.”