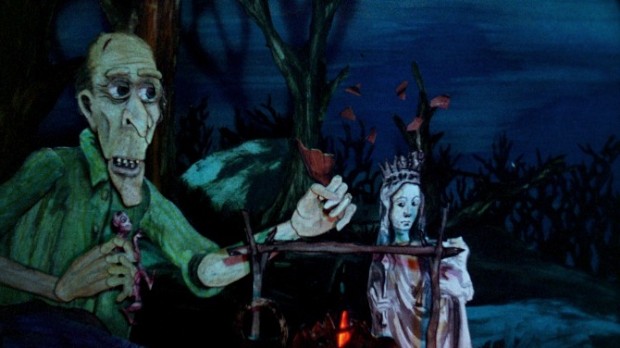 by Lauren Wissot
in Directors, Interviews
on Dec 30, 2012

I first became aware of Chris Sullivan’s epic experimental animation Consuming Spirits while trolling the Tribeca Film Festival website, searching for cutting-edge work that might play well in the wild southwest. (I served as the director of programming for the 2012 edition of the Santa Fe Independent Film Festival.) Needless to say, Sullivan’s painstakingly handcrafted, novelistic tale of darkly intersecting lives at a small town newspaper – one that eschews any hint of flashy Disney for highly detailed Cassavetes – turned out to be both a must-see and a must-get for me. So I was pleased to recently have the opportunity to chat more deeply with Sullivan, who fresh off his NYC Film Forum premiere spoke with Filmmaker about everything from bringing experimental theater to animation, to academia’s cultural hegemony, to never sacrificing cooking for art.

Filmmaker: So I know that Consuming Spirits has been billed as a hand-drawn labor of love that was “15 years in the making” – but what exactly does that mean? Can you talk a bit about the film’s origins and why the process itself required such a lengthy gestation period?

Sullivan: Visually the film was born from flashes of images, the first being the image of John Torrington’s body exhumed from the Franklin expedition, more than 100 years after his burial. And the second was from a shaman exhibit at Chicago’s Field Museum, which describes a man who sounds like my father. From these beginning points I created a fiction that had links to my actual childhood, which featured alcoholism and social service intervention. I began to write the film in 1996, and while doing some pencil cel animation worked on the script for a good year. As the film progressed its length grew for two reasons. The actual animating ran anywhere from eight to 10 seconds of footage created per day, for the cutouts, but that does not take into account the actual creation of props, construction and painting – plus the setup of a shot often took an entire day in itself. For the drawn part of the film I would usually do 60 drawings a day, which is 5 seconds of footage. See, this is why the film would have taken six or seven years. But I made the film as a writer, putting in needed scenes, and altering the film. So my 85-minute film became 130 minutes. I should have thought about what kind of films I like, and I would have known this. Recording sound was also essential, and I edited the sound on this film for a good year and a half. The other important fact is that I held a job, raised kids, played with said kids, and had a social life. Basically lived. A great mistake artists make is putting their life on hold for a magnum opus. But no piece of art will pay you back if you shelve love, friends, and yes, cooking. (I like cooking.)

Filmmaker: Perhaps it’s only because I hail from the theater world, but I find it truly thrilling that Consuming Spirits has roots in your stage work. What are the similarities and differences between animation and theater? (I ask because I think of the two as very separate mediums.)

Sullivan: A question close to my heart. The difference between film and theater has always fascinated me, and in the film I use somewhat accepted narrative tropes, using theatrical language, the flashback, the confession, the interview. But beneath this is a fascination I have with trying to create a different kind of cinematic language in film, something that is unapologetically rich and poetic. The way you can with live performance, I want to, strangely enough, bring the language possibilities of experimental theater to film and animation. Film dialogue is supposed to be “real.” But reality in language is not what I am interested in. I want to give myself the room a novelist would, and draw with words as well as images. Animation is its own cinematic world, and has barely been challenged. (Some exceptions are the Japanese studio 4#centigrate – still overly male in its orientation, but amazing – and recent shorts stretching the boundaries of visual language are The External World, Oh Willy, Schitzen, Milche, Eagleman Stagg.) Animation is the ultimate state of suspended disbelief, particularly material-based, non-photographic animations. It requires a great seal of trust from the viewer.

Filmmaker: I’ve always considered filmmakers like Wes Anderson and Tim Burton as (mostly) live-action directors with the visual sense of animators. You seem to be their polar opposite, an animator who directs like an indie filmmaker – more akin to a guy like Ari Folman (who documented his struggles as an Israeli soldier in the 1982 Lebanon War with the feature-length animation Waltz with Bashir). What does animation allow you to explore that other mediums might not?

Sullivan: I think one thing that animation offers is that it avoids the recognition of the actor as employee. One suspends their disbelief, but not to forget that the actor is acting, but that the actor is even happening, even alive one might say. Because of this animation can cover very difficult subjects of pain and suffering without having the burden of it being voyeuristic, or even pornographic. When you read a book, you do not feel for the physical book, you feel for the language of the writer, director, actors.

This can be a drawback as well. You have to fight as an animator to bring people in emotionally, no doe-eyed beauty or sorrowful elderly shaking hands to draw you in. You must win people’s hearts with hand puppets and scribbles, but it also means you break your viewers’ hearts perhaps more gently. Wrinkles, though narratively a bit conventional, do this amazingly. It really snuck up on me. I burst into tears, and five minute after the film was over. Pretty amazing.

Filmmaker: Continuing with indie directors, could you talk a bit about your influences – and how they appear in your work? When I was writing the program notes for this past Santa Fe Independent Film Festival (where I was able to nab Consuming Spirits for a New Mexico premiere) the first thing that jumped to mind was “a gothic version of A Prairie Home Companion.” I take it you feel a kinship with guys like Altman and Cassavetes?

Sullivan: Very much so. And Dennis Potter – who, for some reason, I keep not mentioning to people when they ask me about my influences.

Joe Frank is also a real important voice in my head. He does things in his work that I hope to do with mine. The thing I am most impressed with is that he does not feel he has to defend the morals of his characters. There’s too much of an oversized guilt gland in me to do that. He also will make crazy juxtapositions that should not work but do.

Filmmaker: As a professor at the School of the Art Institute in Chicago, how does teaching affect your work, both creatively and time-wise? Does being in academia help in gaining access to grants? (Your funding is quite impressive – as both the Guggenheim Foundation and the Rockefeller Foundation contributed to Consuming Spirits, and you’ve also been awarded a 2012 Creative Capital Grant.)

Sullivan: Teaching full-time if you cannot survive off your filmmaking (and no, I cannot as of yet, day job secure) is amazingly rewarding. It is a job that allows you to share work you think is important, and help young filmmakers, writers, etc., create the best work they can.

Time-wise it is difficult, but please, I do not work 5 days a week, and 30 weeks a year. It is a wonderful place to be. There are politics, and that is sad, and people really do not want others to succeed beyond them sometimes. With the recent success of Consuming Spirits it is still rare that someone will congratulate me without some bitter added frosting, “Oh, you’re a big star now” or “So how did all this happen?” – those kinds of things. But it is good for students to see that a very odd film can have a life.

As far as grants, that is a hard one, but facts will state that it is true, partially because the educational artistic community runs all of the money, and visibility and name recognition counts. I also make fiction films, which has its funding limits. But I am not “collaborating with a collective” or “working with the community,” so some grants are outside my bounds. There are deserving artists who get money, and undeserving lazy ones that do, but the saddest part is that there are amazing artists who never get funded.

I believe in teaching and I am probably more of an insider than I think, but I am surely not an academic, and frankly, I think the academic circles in media art are getting very clubby, and potentially culturally harmless because of it. I am almost at the point of wanting to boycott all screenings of 70s experimental films. I want to see current work from the ranks of the media community. And no found footage – shoot something new, please.