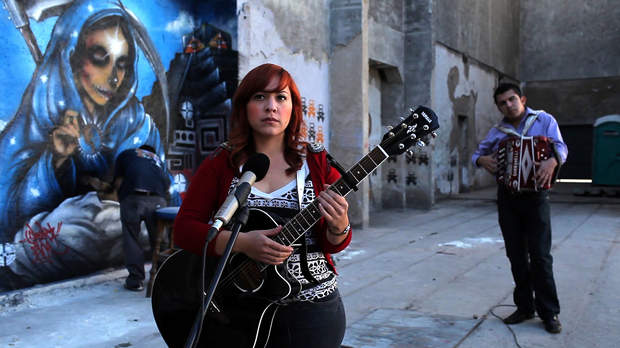 Upon discovering his “inner hippie” many years ago, Duncan Bridgeman left a successful career in music production — for artists like Paul McCartney, no less — and committed himself to “taking things out of their boxes,” he said in a recent conversation with Filmmaker. His desire to challenge musical convention introduced a new artistic medium altogether to his work: film. Bridgeman joined forces with Jamie Catto, from the electronica band Faithless, to create the multimedia project “1 Giant Leap.” True to their name, the pair traveled to over 20 countries, where they shot film of musical performances and interviews that eventually would be interwoven into 1 Giant Leap, released in 2002 as both a film and an album (the work received two Grammy nominations). What About Me? followed in 2009. In both works, Bridgeman and Catto built from the music up, trading in the narrative structure typically employed in documentary film — a form often intended to instruct — for the language of music: fluid, abstract, evocative, at times mercurial.

Bridgeman once again uses music as the chief vocabulary in his latest film, Hecho én Mexico (“Made in Mexico”), an energetic depiction of a country that is universal in its spectacular specificity. The film cuts an impressively wide thematic swath, addressing topics like love and lust, individuality and community, freedom and conformity. Bridgeman anchors these high-minded philosophical musings to the raw, kaleidoscopic details of the lives of everyday Mexicans. “There is madness there but most of the 110m Mexicans are just getting on with their day, dealing with the crisis of lost love or worrying about their mum or trying to earn a living,” Bridgeman wrote in a dispatch for the Huffington Post earlier this year. “These were the people I was going to meet. And we would create something beautiful together, I knew that.”

In Hecho én Mexico, the creation of music is a rite of human connection. Native musicians perform in front of the camera in a range of settings — a mountain top, a subway car, near train tracks — and their sets harmonize and bleed together, as though everyone is contributing to a single opus echoing across cultures and generations. The film barrels forward in a whirl of thumps, claps, cries, and vibrato, occasionally coming up for air to show segments of interviews with thinkers whose carefully considered statements of intellect can seem, comparatively, to lack the emotional punch of the music. The dizzying heterogeneity of Hecho én Mexico has an effect similar to that of the hem of a dress spinning too wildly to follow: the beauty resides in the rainbow blur.

Filmmaker: What is it about music that made it the appropriate means for tackling the big themes — love, death, freedom, among others — addressed in your film?

Filmmaker: Can you discuss the creation of the music for the film? Was it composed by you, by others, or perhaps in collaboration?

Bridgeman: A bit of everything, really. There was an idea before; I constructed a soundscape of stuff that I’d written, backing tracks, obviously not lyrics because I can’t speak Spanish. But what I like to do is, whenever I turn up to a session with someone, I want to have something that will inspire them. My job, really — if I’m lucky enough to meet with someone great, and I am lucky enough — is that when I get there, I have something to inspire their greatness. I’ve been mixing up genres of music all my life, so while I’m not an amazing virtuoso on any instrument, I can sit in, whether I’m in Africa or Russia. A lot of the traditional stuff is three [3/4 time signature] in Mexico. That was great, to really explore three. I had to move out of the box a bit, but that’s the beauty of it. That’s what I love.

Filmmaker: Hecho én Mexico struck me more as an artful collage of images and sounds, rather than a more didactic narrative that is typical of most documentaries. Your film seemed more intent on revealing than telling.

Bridgeman: I’m not trying to make a point in any way. I’m trying to entertain, make you smile, make you cry. People say that about the film a lot — they cry. It’s not that it’s sad. It just touches that point in your heart. It is that pride in being Mexican. I am getting an incredible response in [Los Angeles], where second-generation Mexicans who haven’t been to Mexico that much are still very proud to be Mexican.

Filmmaker: What was the most unique aspect of Mexican music that you discovered during your time there?

Bridgeman: Before I went there, norteño [a popular genre of Mexican music] was very easy to write off as quite daft because it’s got such a unique, slightly comical thing to it. But now I realize what it means to people there, and now I fully appreciate the form and it’s really taught me a lot. Down in the South, you’ve got Mono Blanco — punk rock in a way, three-chord songs, and that’s a whole amazing form of improvised music that I love.

Filmmaker: How would you describe your work process?

Bridgeman: My whole artform is improvised — no storyboards. It’s like a treasure hunt. You find one thing and it leads you to the next thing. I had to have an enormous amount of trust in the process because often I am getting a lot of things that I don’t really know how to fit together. I keep some kind of discipline in it, but within that discipline, I really understand how important it is to let things go. It’s always the unexpected that brings the biggest smile.