“A Friendly Person Who is Easier to Handle Than a Dog”: Werner Herzog’s Masterclass at Visions du Réel 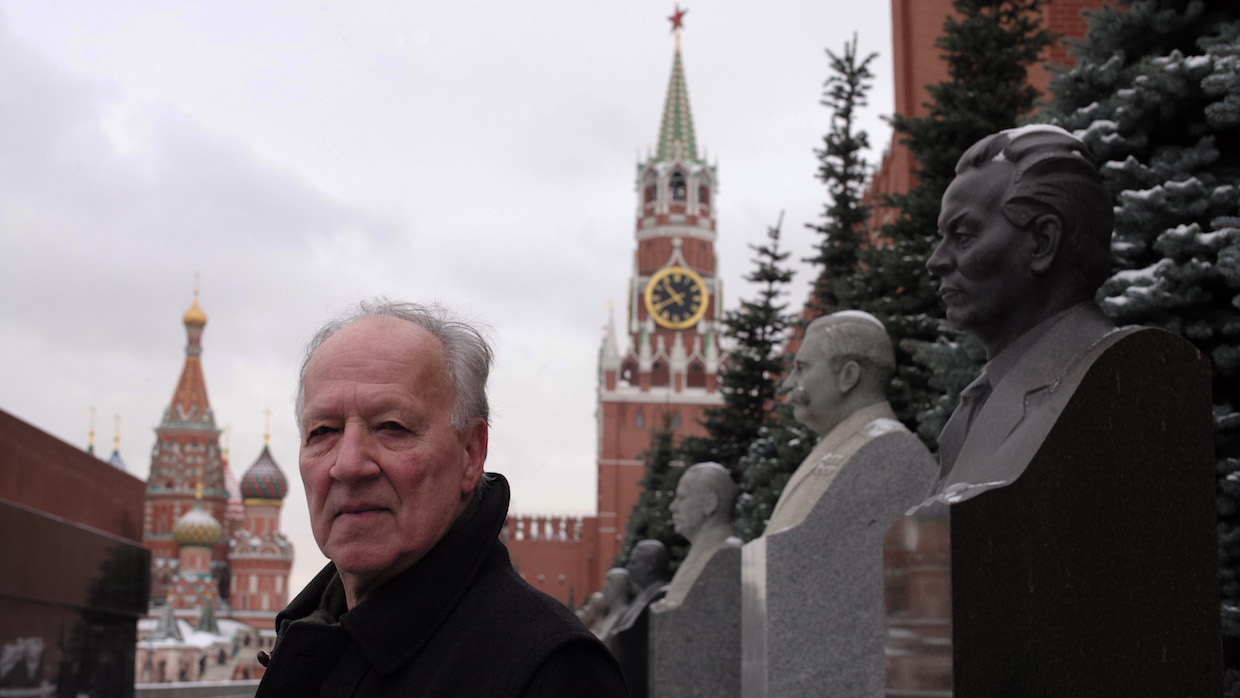 by Giovanni Marchini Camia
in Festivals & Events
on Apr 12, 2019

A figure of such stature as Mikhail Gorbachev is an awkward fit for a documentary by Werner Herzog, a director whose non-fiction work has chiefly focused on extraordinary personalities and experiences excluded from history books. As such, it’s not overall surprising that his latest, Meeting Gorbachev (co-directed with his frequent producer André Singer), should be hamstrung by its subject, a man who withstood unimaginable political pressure and media scrutiny as he navigated, if not orchestrated, one of the most momentous chapters of the 20th century.

As Herzog explained in a masterclass held during the 50th Visions du Réel documentary film festival in Nyon, Switzerland, Gorbachev resisted his attempts at transcending a conventional portrait: “Normally, I would have walked with him along the river, or I would have been with him in his village, or I would have done certain things with choreography of movement.” Instead, they were confined to his office for three separate meetings, with two fixed cameras trained on the physically impaired but intellectually lucid Gorbachev, who for the most part repeated answers he had already given countless times.

When Herzog tried to discuss why it has proved impossible for humanity to get rid of nuclear weapons, hoping to probe “the strange intrinsic quality of violent weapons systems” by bringing up an anecdote about 17th century samurais voluntarily relinquishing firearms in favour of swordsmanship, Gorbachev didn’t humor his philosophical overture. All that is left of this exchange in the film is a stale statement about the UN’s responsibility vis-à-vis nuclear disarmament, which Herzog concedes “doesn’t explain anything.” The one moment in Meeting Gorbachev that comes closest to conjuring Herzog’s trademarked “ecstatic truth” is the finale. The director said he tricked Gorbachev by asking him to recite a poem by Pushkin, knowing that he would refuse. Gorbachev instead offered one by Lermontov and the film closes with him quoting the rueful “I Go Out on the Road Alone” in full, giving a more powerful expression of how he lived the failure of his efforts than in all the preceding answers combined. Here, Herzog said, “I felt like I was looking into the very soul of Russia.”

A superlative example of ecstatic truth was presented later, in a clip from Lessons of Darkness (1992), Herzog’s poetic document of the aftermath of the Gulf War. Images of Hadean landscapes and of men trying to stem a gushing oil pipe, toxic black sludge spraying all over them, glide past in extreme slow motion and to the rhapsodic strains of Schubert’s “Notturno,” accentuating the situation’s horrific absurdity while casting the workers as mythical heroes. Discussing the clip, Herzog’s passion was palpable: “Seeing it again shows me how much I love men at work.” Addressing the filmmakers in the audience, he implored them to film “real people and real work. You never go wrong.” When one later asked him to what extent serendipity played a role in his filmmaking, he answered that he “always keep[s] doors open for the miraculous to enter” and gave an example from the shoot of Bad Lieutenant: Port of Call New Orleans (2009): he saw an iguana near the set one day and spontaneously came up with the idea of filming it in close-up to visualize the protagonist’s drug-addled subjectivity, thus randomly chancing upon one of the film’s most inspired images.

And yet, on the topic of digital cameras, whose practicality he extolled, Herzog warned against the seductive possibility of accumulating masses of footage. For a feature that he recently finished filming in Japan, he ended up with only 360 minutes of rushes, a typical shooting ratio for him. “Don’t just keep the camera rolling, you never catch anything special. You only catch the mediocre, and it goes on for hundreds of hours. We are not garbage collectors, we form and shape films. You have to take decisions while you are shooting. You cannot fix things in post-production, it’s an illusion.” Correspondingly, he spends very little time on the edit. Although he tries to forget his original intentions while editing to allow the material “develop its own life, its own dynamic, its own form,” ultimately “great footage always fits together.” Grizzly Man (2005), in large part made up of found footage, took nine days to edit, and Into the Abyss (2011), the documentary he shot on death row, five or six.

The editing room is also where Herzog comes up with his documentaries’ endlessly quotable voice-overs; he never thinks about the narration while shooting, nor changes it after completing a rough cut. When working on a scene with his editor, he will watch the footage and simultaneously write down the commentary, which he then records right away and keeps refining until it fits. He also shared that his speech’s famous magniloquence isn’t mere idiosyncrasy, it’s very much calculated in order to instil the “necessary gravitas and, sometimes, the necessary lightness.” As illustration, he quoted a passage from his volcano documentary Into the Inferno (2016)—“Nature is monumentally indifferent to scurrying roaches, retarded reptiles and vapid humans alike”—arguing that it is essential “to find a form that combines content, image and stylization of voice.”

These voice-overs, of course, are largely responsible for the unfortunate memeification of Herzog’s persona that has occurred over the last decade or so, threatening to overshadow his tremendous contribution to film history. He rejected the moderator’s suggestion that his various film roles, ranging from the tyrannical father in Julien Donkey-Boy (1999) to the villain in Jack Reacher (2012), are stylised versions of himself, contending that he’s “basically a friendly person who is easier to handle than a dog.” He happily admitted that he has enjoyed playing—and in most cases co-writing—his tongue-in-cheek characters and, in the case of mainstream productions, the fact that “they pay handsomely.” The countless Youtube impersonations and fake Facebook accounts he simply shrugged off. “I live in this perception and I couldn’t care less. I don’t want to engage in self-reflection. It doesn’t matter.” Pointing to the cinema screen behind him, he added, “The only thing that matters is what you see here.”