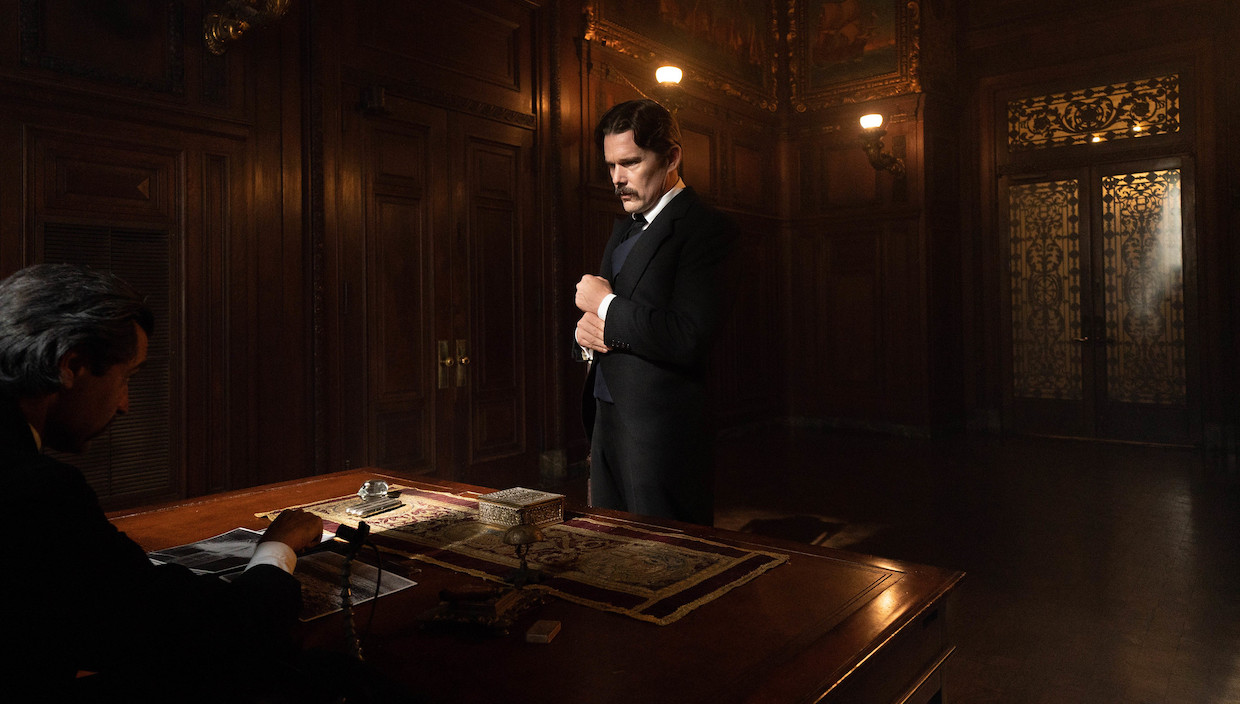 I don’t have anything like Six Takeaways From This Year’s Sundance to structure my final dispatch: The most I can offer is my general peer group’s consensus that the fiction side was relatively quiet while nonfiction work was stronger and more attention-getting, including the four-film launch of Concordia Studio. They arrived with, among others, my personal best-of-fest Bloody Nose, Empty Pockets and Time, and ended their first Sundance with the (reported) $12 million sale of verité doc Boys State to Apple and A24. Also high on the nonfiction priorities list, via Netflix, was Kirsten Johnson’s Dick Johnson is Dead, which premiered with the director onstage alongside her new spouse (and, it’s now been announced, new director of Sundance overall) Tabitha Jackson. Who else would be in attendance for the post-screening Q&A was unclear, because Dick Johnson raises a lot of unusual ethical questions, such as: is it a spoiler to clarify whether the title of the film actually tells you the subject’s fate, or whether it just describes the starting prompt premise for a film that may end with him alive and well?

“Death as spoiler” is a morbidly comic notion, and that fits the film. Amazingly enough, it’s pretty much exactly what Johnson promised in an interview three years ago when getting started: “an observational documentary which I hope will be an hilarious heartbreaker. You know Groundhog Day, Buster Keaton, Jacques Tati and Jackass?” The starting point is a knowingly sick gloss on Groundhog: to stave off the pain of her beloved octogenarian father’s inevitable death, Johnson plans to stage (and stage and stage) a number of variations on accidental death—crushed by a falling A/C; whacked by an inattentive construction worker’s plank, its nail making an incision, etc.. The gruesomeness of executing these requires a stuntman, hence Keaton and Jackass—Tati I don’t really see as much, since the physical humor is quick and violent, nothing like M. Hulot’s gentle bumbling. And “hilarious heartbreaker” (a Netflix “Recommended For You” category in the making if it doesn’t already exist) is clearly the intended end result of this unwieldy mixture.

It’s strange that a film that’s so determined to mix-and-match its tones is also so emotionally legible: at every moment, it was possible to tell exactly where I was supposed to be on the laughing/crying/laughing-to-keep-from-crying spectrum. I am, nonetheless, baffled, in a non-hostile way—what I was supposed to feel very rarely actually happened. In its construction, Dick Johnson is Dead is actually not that different from Cameraperson, in which Johnson created an emotional autobiography from footage shot over her long career as a planet-roaming documentary shooter, her personality and concerns slowly emerging without being consciously articulated in voiceover. Assembled (minus a few old home movies) from three years of deliberately shot footage rather than two decades’ worth of archival possibilities, Dick Johnson ends up being about some of the same things as Cameraperson— being able to travel for work on a regular basis (Seattle and NYC are the two main locations, with side trips to Loma Linda and Lisbon), merging personal life with film, tracking the growth of Johnson’s children—and similarly strives for emotional cohesion through juxtaposition. What’s new this time is a good amount of money, which allows for Johnson to stage both fatalities and the heavenly afterlife, the latter rendered as a knowingly tacky music video (I thought of David LaChapelle’s video for “Not If You Were the Last Junkie on Earth”) with Johnson’s dad delightedly dipping his finger into a chocolate fountain in ultra slo-mo.

I preferred the lower-key personal/observational strand, in which Johnson observes her father’s slow decline over the years as dementia digs in, but she uses film’s ability to provide the illusion of arresting death to push back all the way, and the climax is reminiscent of the “living funeral” sequence in The Weather Man, which I didn’t see coming. Is that a spoiler? I don’t know, and it feels weird that that’s a question I have to ask. It’d be disingenuous of me to pretend to be genuinely “troubled” by Dick Johnson, if only because I have an ethical sliding scale as a viewer that basically comes down to whether the results are worth it—cf. Ulrich Seidl’s Import/Export, a major film that (for me) earns its extremely discomfiting inclusion of nursing home residents obviously unable to give informed consent to their filming. So why does something starting from a more ethical place— Dick was able to understand what he was signing up for when the project started—bug me a little? I did kind of wince when Dick asks if he’s getting paid and Johnson says, laughing, “No”—documentary subject payment, or lack thereof, is a big discussion largely kept out of public sight, and riffing on it like this is fair but still disconcerting. Generally, I didn’t laugh or cry when I was obviously supposed to, found the way the ending worked to be way more manipulative than moving and left absolutely baffled that this movie exists—not just logistically, but more in a “what’s the point” way. More power to Johnson for leveraging Netflix money to make an absolute UFO while also finding an emotional space to process that works for her, but I personally have no idea to do what to do with this.

My Sundance ended exactly as planned, with Michael Almereyda’s Tesla, a project roughly 40 years in the making: the 60-year-old wrote his first draft at age 20. (That interest was partially channeled into 2002’s Happy Here and Now, in which David Arquette was working on a soft-core movie about a time-traveling Tesla.) The long-gestating final product finds him and DP Sean Price Williams leaning into a knowingly smeary digital look, which makes sense: the subject is, in part, the development of radical new technologies that changed the world, and specifically what light looked like, so a more contemporary-looking image is eminently appropriate.

Woozy and strange even by Almereyda’s singular standards, Tesla observes the inventor (Ethan Hawke) from the early 1880s to just after the turn of the century, when patron J.P. Morgan finally pulled the financial plug on his projects. As with Experimenter‘s portrait of Stanley Milgram, Almereyda is clearly expressing his genuine fascination with a formative scientific presence—both movies make the case that their subjects shaped our day-to-day life more than most of us realize. So this Tesla is being taken on his own terms, not as a mere stand-in for the artist—but it’s hard not to also perceive some self-identification between filmmaker and subject in the recurring emphasis on financial trouble. Tesla’s story is recounted by a sympathetic observer, Morgan’s daughter Anne (Eve Hewson), who in the film’s telling could have been his great love if the inventor didn’t (by his own words in the film) have trouble with women and (in her reading) live too much in his head. She still has nothing but sympathy for his life and work in her fourth-wall-breaking narration: “A man who doesn’t care about money finds himself tormented by the lack of it,” she says of a man who could have used “an enlightened huckster to steer him through.” The implications, of course, go beyond the relatively petty travails of film financing, leaving the audience a question to answer for themselves: “Idealism cannot walk hand in hand with capitalism. True or false?” Anne’s asking the right questions—but still, she’s another wealthy person controlling a historical narrative, albeit more benevolently than usual.

Where Experimenter cleanly divided Milgram’s life into discrete, mostly linear segments, tackling each one at a time, Tesla’s continual financial instability and personal awkwardnesses are translated into a film that’s much more of a Big Melancholy Mood, continually floating through events Tesla often has little control over. His first antagonist is Thomas Edison, embodied by Kyle MacLachlan—once again at antagonistic odds with Hawke 20 years after they faced off in Almereyda’s Hamlet. All this is strange, unpredictable, less focused than Experimenter by design and not as cumulatively powerful, but a tonic finale to the festival. Almereyda’s very particular, precise sense of humor and surprise is on unexpectedly timed display throughout. (Small detail: as Sarah Bernhardt [Rebecca Dayan] dies on-stage as the consumptive heroine of La Dame aux Camélias, it’s not her we hearing coughing as befits her onstage illness but, of course, an audience member.) Tesla ends with a karaoke song choice so perfect, its lyrics so unexpectedly aligned with the character I had to wiki it immediately to see if the backstory somehow indicated it was actually written about Tesla. It wasn’t, which is even more interesting: a massively popular song is emotionally recoded as perfectly expressing Tesla’s regrets, missed opportunities and the voices of his antagonists. With its time almost up, Tesla suddenly snaps into sharp emotional focus, and the subsequent epilogue clarified this often-mysterious movie’s agenda—as an emotional way to process aging, failure, missed opportunities and death, this was much more my speed.