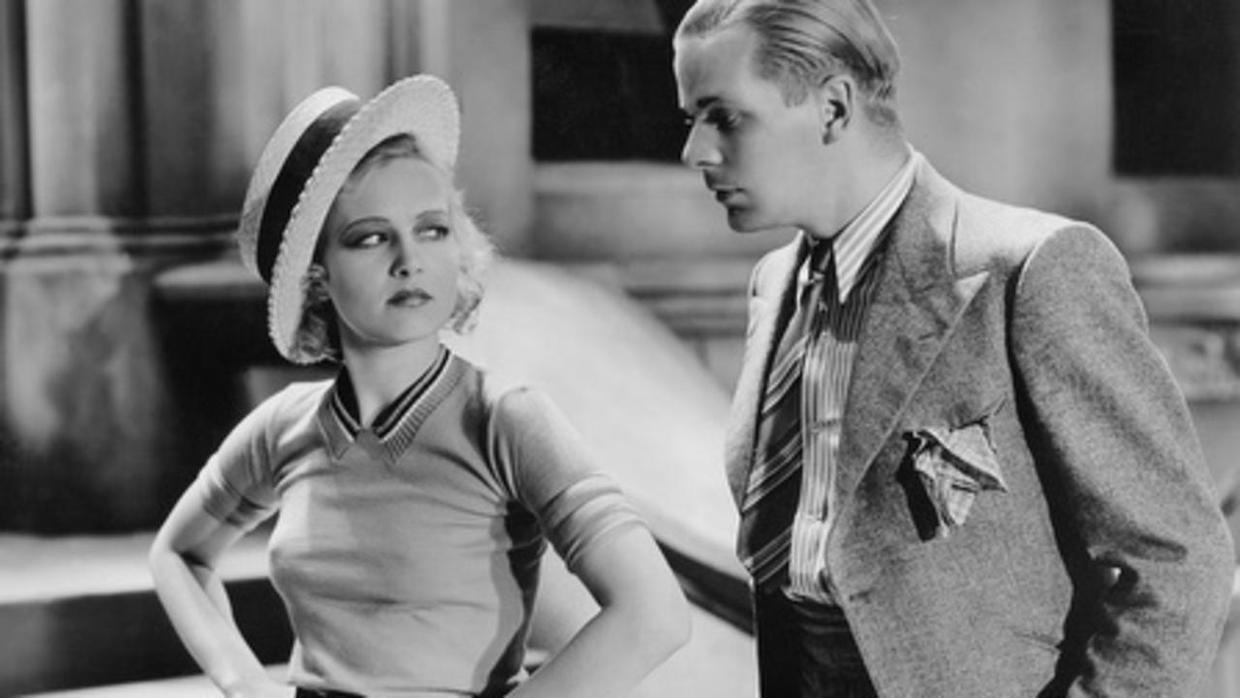 On the shuttle from the airport into Berlin I snapped some pictures as we passed Brandenburg Gate, Victory Column and the Television Tower. My hotel was just a few blocks from Checkpoint Charlie, so several times a day, as I made my way to and from Potsdamer Platz, I would walk over the brick-drawn lines in the sidewalk that mark the former location of the Berlin Wall. East into west, west into east—that and a meal with friends at Stadtklause, the pub where Bruno S. would perform with his accordion, satisfied whatever interest I had in playing tourist. Except for taking a few short subway rides to find better restaurants, I was content to stay in the main festival area, where the press offices are a two-minute walk from three screening venues and The Barn, a first-rate coffee shop and meeting spot.

The Berlinale, I realized fairly quickly, is something like my ideal film festival, mostly because the program balances its lineup of important premieres with expertly curated sidebars. In North America we tend to draw a line between those two worlds, relegating repertory programming to a few key institutions in our major cities and adopting everywhere else a generic approach to festival curation that amounts, with varying degrees of success and ambition, to showing the best new films we can get. There are practical reasons for the situation, including the scarcity of curatorial expertise and the lack of access to public funding and film projection. Regional organizations are also burdened by keeping up with the Joneses, choosing to simply adopt the good-enough model that appears to be working in peer cities. Still, it’s a major loss for North American film culture. Without the counter-balance of older films and older forms—without the tangible presence of cinema history and the conversations and experiences it engenders—our festivals too often celebrate trends and ephemera.

As I mentioned in my first dispatch, the Forum celebrated its 50th anniversary this year by re-presenting its inaugural program. Forum was born out of a controversy at the 1970 Berlinale, when jury president George Stevens demanded that Michael Verhoeven’s anti-war film o.k. be removed from competition. No compromise could be reached, so the competition was canceled, no prizes were awarded and in the aftermath, the festival board invited Friends of the German Film Archive (now Arsenal – Institute for Film and Video Art) to present a separate, independent festival alongside the Berlinale. Erika and Ulrich Gregor, who co-founded Friends of the German Film Archive in 1963, agreed to a budget and set about curating a program of “difficult, dangerous films.” (Critic Bert Rebhandl recently moderated a conversation between Erika and Ulrich Gregor, Christoph Terhechte, Stefanie Schulte Strathaus, Birgit Kohler, and Cristina Nord, who tell the full story.) The 28 titles screened in Forum 50 indeed include radical work of the day by Theo Angelopoulos, Nagisa Ōshima, Alexander Kluge, Chris Marker, Harun Farocki and Hartmut Bitomsky, Dušan Makavejev, and Jean-Marie Straub and Danièle Huillet, alongside Happiness (Alexandr Medvedkin, 1935) and Obsession (Luchino Visconti, 1943).

Designing a screening schedule is an overlooked skill in programming, so I want to tip my hat to whomever scheduled The Murder of Fred Hampton (Howard Alk, 1970), Eldridge Cleaver, Black Panther (William Klein, 1970), and Angela – Portrait of a Revolutionary (Yolande du Luart, 1971) on consecutive mornings, in that sequence, at the Arsenal theater. They were, for me, the highlight of the festival. Together, the three films are fascinating studies in political and rhetorical style—Hampton the fiery and charismatic young rapper, who might have preached the gospel if he’d found religion instead of revolution; Cleaver the kind-eyed politician/convict, who speaks slowly and in measured, perfectly articulated sentences; and Davis the philosopher/teacher, who is as quick to laugh with students as she is to call out frisbee-tossing hippies for their shameful lack of commitment to the struggle. “What are we celebrating?” she asks them with exhausted disdain.

I’ve seen clips of Hampton, Cleaver, and Davis over the years, but the films include long sequences of public speeches and private interviews that allow time for us to watch their minds at work and to experience in our bodies their control of rhythm and tempo. Du Luart and her crew followed Carter for several months, so we witness her sometimes awkward transformation from a high-achieving student of Adorno and Marcuse into the role of revolutionary icon. Of the three, Hampton was the finest improviser, a true genius at the game, who was fueled by genuine rage over injustice and by an ego that compelled him into the spotlight. At one rally, Hampton seems hesitant to turn over the microphone to his second in command, Bobby Rush. Hampton has the audience right where he wants them, on the edge of their pews with fists raised, answering in unison to his call-and-response. When Rush does finally take the stage, it’s immediately apparent why the FBI murdered 21-year-old Hampton. Rush’s nervous stringing together of Black Panther talking points would never stoke an uprising, but the threat posed by Hampton was real.

“We’re gonna make our deaths expensive,” Cleaver says near the end of Klein’s film. Although he in fact lived a relatively long life—long enough to become a born-again Reagan Republican!—Cleaver was sounding a common refrain of all three films: that fighting racist American imperialism at home was the most important battle in a war that extended from Oakland and Chicago to colonialist Africa, Southeast Asia, and beyond. Cleaver, who was living in exile in Algeria at the time, is clear-eyed about their chances of overthrowing a well-armed technocracy. His politics are one step removed from the purity of Hampton’s “high on the people”/“kill the pigs” rallying cries. In the long-term struggle, “’The black community’ and ‘the white community’ become meaningless categories” for Cleaver, who questions every tool of power, even language itself. “Fuck, fuck, fuck, fuck,” he says to cheers and laughter, demonstrating in real time that when we exclude non-Oxford English Dictionary words from the discourse, we exclude people from the discourse. Within the context of a cultural event as grand as the Berlinale, that still felt difficult and dangerous.

As did Northwest Passage (1940), which screened in the Berlinale’s 33-film King Vidor retrospective and which is one of the grimmest depictions of racist imperialism I’ve ever seen. Starring Spencer Tracy as Robert Rogers, the film follows a company of soldiers during the Seven Years’ War as they paddle and trudge their way north to launch a surprise attack on a camp of Indians. Vidor replaced W.S. Van Dyke on the big-budget, Technicolor spectacle, which was conceived as the first of two films (Rogers’ Rangers don’t head off for the Northwest Passage until the final scene) before poor ticket sales caused MGM to cancel the sequel. Like John Ford’s Drums Along the Mohawk, which was released a few months earlier by 20th Century Fox, Northwest Passage puts the full force of the Hollywood studio system behind a disturbing and expressionistic study of the trauma of war. For the first half of the film, Rogers’ pragmatic-to-a-fault leadership style seems almost kindhearted: he’s just looking out for his men and giving them the best chance of survival. But the long and gruesome battle scene, which generates none of the traditional pleasures of a war movie, and the even longer and more gruesome march back home, during which Rogers loses more than half of his men, harken more to Joseph Conrad than to other historical adventures of the day. Rogers’ patriotism, duty, and honor are all false flags. His single-minded commitment to his mission is gradually exposed as sadistic race-hatred drawn to the level of madness. Northwest Passage has the disillusioned, Herzogian worldview of the post-Vietnam era. It would have fit nicely into the 1971 Forum program.

The best of the five Vidor films I saw was Street Scene (1931), a Pre-Code adaptation of Elmer Rice’s Pulitzer Prize-winning play about two days in the life of six families who share a building in New York. All of the film’s action takes place on the stoop, where they gather to escape the heat and where Mrs. Jones (Beulah Bondi in her first film role) gossips with anyone willing to suffer her bitter condescension. The main focus of her attacks is Mrs. Maurrant (Estelle Taylor), a middle-aged mother of two, who is sleeping with the milk man while her belligerent salesman husband is on the road or at the bar. Barely out of her teens, their daughter Rose (Sylvia Sidney) is already worn down by the sexual advances of her boss and by the catty accusations of her neighbors, but she finds some degree of solace from her conversations with Sam (William Collier, Jr.), the sympathetic Jewish boy next door whose father speaks mostly in Marxist aphorisms.

Street Scene is a stereotypically Lefty, Depression-era scenario. When tragedy strikes, it has the weight of inevitability because it’s happened within a social space engineered as a dialectic. All of the determining forces are confronted head on: antisemitism, xenophobia, sexism, alcoholism, violence, each a symptom of the more fundamental class divide. That Street Scene never feels like an ideological tract, even 90 years later, is testament both to Rice’s screenplay and to Vidor’s style, which arouses genuine sentiment from the relatively simple means at his disposal. All of the Vidor films I saw were projected from 35mm prints onto a massive screen at the CinemaxX, which I mention because the 25-foot-tall images amplify the effects of Vidor’s blocking—the way Rose leans against one railing of the stoop, clutching her purse in her lap and putting as much physical and symbolic space as possible between herself and her boss; or the tight shot over Sam’s shoulder as he looks up at Rose and imagines an impossible scenario where they escape together, and she nods with tender resignation.