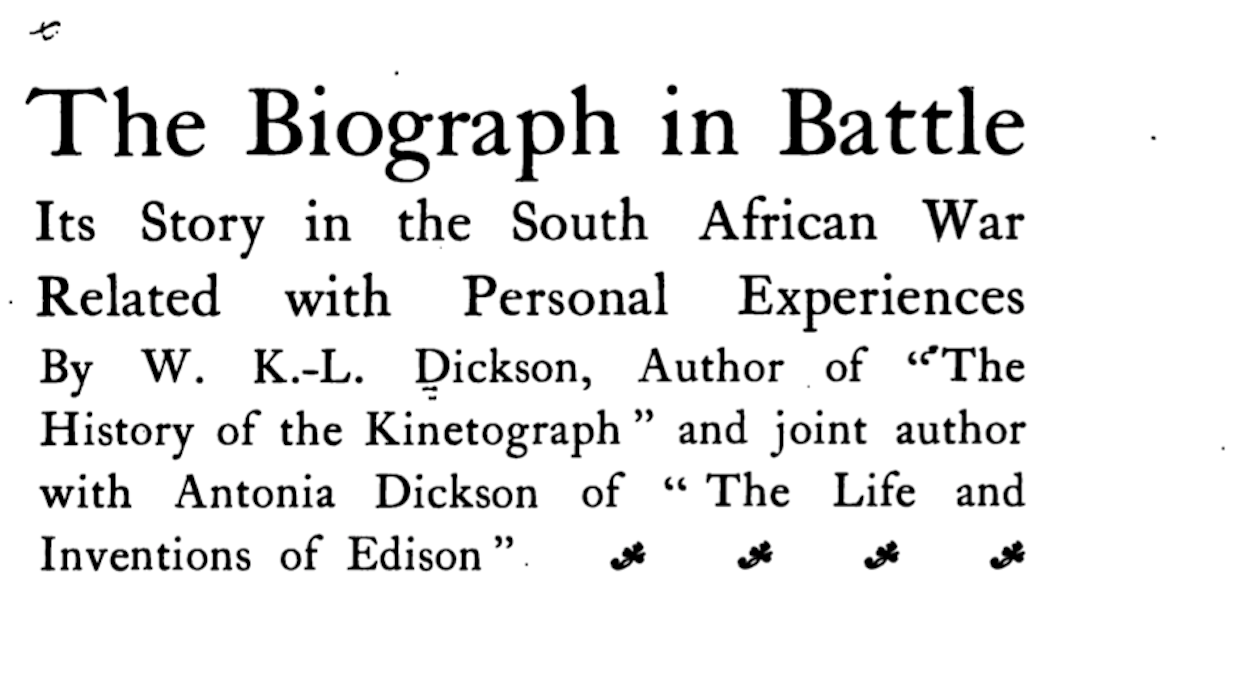 As a publication about film, we find ourselves in the peculiar position of publishing during a moment when theatrical access to movies, and their ongoing future, is as much in question as everything else. During this suspension of normal filmwatching habits, we’ve reached out to contributors, filmmakers and friends, inviting them to find an alternate path to the movies by participating in a writing exercise engaging with any book about or lightly intersecting with film, in whatever way makes sense to them. Today: hello, it’s me. — Vadim Rizov

Last January, I went to MoMA to see British silent film scholar Bryony Dixon present a program of newly restored 68mm shorts from the late Victorian era. These astonishingly detailed actualities included plenty of hypnotic views of water simply moving (a frequent subject early audiences warmed to, Dixon said, before the expectation of narrative structuring became viewer default) and phantom glide shots from trains and boats. (UK readers can stream these shorts, alongside many others, here.) These are two kinds of images I respond to strongly, and afterwards I was intrigued enough to go down a number of related internet k-holes, eventually finding myself staring at W. K.-L. Dickson’s 1902 The Biograph in Battle: a first-person account of cinema’s earliest days from one of its most important figures, long out of print, the kind of deep-cut curveball I like to take on occasionally. I found it available online at archive.org and kept that tab open (both on my phone and laptop) long enough for it to sink into my memory. But would I ever seriously actually sit down and spend a quiet evening scrolling through a Google Book scan? That seemed unlikely, but then the “Time Enough at Last” scenario kicked in. (The scan itself is endearingly human—a stray thumb is seen at the bottom of some pages—but missing or repeating a number of pages. This is hopefully not what the digital library future looks like.)

At Thomas Edison’s Menlo Park studio, Dickson came up with the 35mm film gauge; later, when founding the Biograph Company, he settled on the 68mm format, in part to avoid violating Edison’s patents. He’s unquestionably a major, pioneering figure in early film, and I have zero intention of “calling out” a person who died in 1935. That said: the first thing to note is that, even by the standards of late Victorian writing produced by die-hard believers in the desirability of the British Empire’s sun never setting, The Biograph in Battle is astonishingly, continuously racist. This is not a surprise, as its very premise is objectionable: Dickson tags along with the British Army, continuously praising the “brave chaps” as they go to battle against the Boers to see who, ultimately, will have the right to subjugate South Africa for their own colonial purposes, a real bad vs. evil/“let them fight” faceoff. Throughout, Dickson’s racism ranges from merely condescending to actively hateful; it would serve no productive purpose to reproduce examples here from a book that includes a visit to Cecil Rhodes’s pad to check out his cool backyard, and in which H. Rider Haggard is the most-cited reference point. (If this paragraph is mostly anachronistic gibberish to you—be happy about that.)

All that aside, The Biograph in Battle presents a portrait of nascent nonfiction filmmaking that’s archaic in its technological specifics and familiar in its general process, which is probably what I should have expected. Rendered in diary format, Dickson and company’s journey begins with large Biograph and Mutoscope cameras in tow (the latter primarily associated with early flip-card viewing booths). These apparatuses are stupidly large: of the Mutograph, Dickson notes that “throughout the trip we used it for a table” during mealtimes. As for the Biograph, at one point “we had to lunch under [its] shadow […], whose huge proportions afforded great relief from the broiling fiendishly hot sun, our tent not having yet arrived.” The plus-side of all this bulk is a hardiness contemporary operators can only dream of: when the Biograph falls off a cart, “As usual, the camera […] remained uninjured. It seems to live a charmed life.”

Getting dailies to the lab is a pain in the ass when at sea:

Collecting our various snap-shot plates and films, we prepared the packet for shipment to London, facilitated by the courtesy of the doctor, who lent us his surgery for a dark room. It was then noon, and the vessel was to leave at 12.30. Not wishing to trust the packet to any of the natives, we took a boat to shore […] were picked up by a tug and towed in a most alarming manner through the boiling and seething water as we dashed along. We cast off from the tug and rowed to shore, beached the boat among the breakers and ran. Instructions were given to rush the packet through to London. As I am now scribbling again on board, I need not add that we ” just caught the boat” and had an hour to spare. Humiliating!

Securing cooperation from subjects is not difficult. Soldiers obligingly wait to transmit messages via flags until Dickson can get his camera in his place; more impressively, the army’s willing to switch out the order of train cars to showcase one riddled with bullet holes from the front lines: “The armoured train has two engines, one in the middle and one in front: the one in front was put on especially for me [… and] will be switched off at next station.” And while Dickson complains frequently that various middle manager officers make his movements difficult even when he’s got passes from the very top of the command chain, more often than not his subjects want to make sure he’s getting good footage, as in a particularly chilling/representative passage:

December 13th, at 7.10, we open fire on the enemy, our Terrible men doing marvellously good shooting, planting each shell just where it was needed, Boers flying left and right. […] After the morning’s bombardment, Captain Jones greeted me pleasantly and remarked, “Now are you happy?” “Yes,” I replied, “the more I can get of the real thing the happier I shall be.”

“Well, you’ll get plenty more,” he added. Strange how coolly we took the whole thing, considering the destruction it involved.”

No worrying about documentarians being complicit in perpetration of unethical or deadly activities here, a concept that’s decades off from being formulated. When Dickson spots some Boers dashing from trees to shelter, “as I was under one of the guns on the hillside, it didn’t take me long to notify the commander, who whisked his field-glass in that direction, saw them, and ordered a lyddite shell to be sent in among them, with appalling results. So I suppose I must have some of that on my conscience, which, strangely enough, seemed to elate me rather than depress.”

Less grimly (?), Dickson struggles to figure out how to best use a telephoto lens, learning his gear’s pros and cons on the fly:

We have made every effort to get a photograph of the Boer position, and the effect of the shots, by means of the telephoto, but we were forced to give it up owing to the haze and indistinctness which made it impossible to focus properly. There are many other difficulties besides, all of which I hope to overcome in time. I shall then focus on the fortification and start our machine immediately after the shot has been fired, so as to see the effect.

Dickson ignores the “kindly advice,” meant to keep him to safe, to attempt to film a general from “the opposite hill” by telephoto lens; as he explains (probably with great patience), “not being very sure of this new lens, I preferred to use my 8-inch Bausch and Lomb, and get within fifty feet instead of 1,500 yards or 2,000 yards.”

Of course, like any filmmaker, Dickson wonders if people notice his work. Pre-labs and impact campaigns, the feedback he gets is limited but gratifying. On the battlefield, he runs into a Boer sadly shaking his head while surveying the 33 dead: “Poor fellows, poor fellows, what a pity!” Changing the subject, Dickson asks “if he knew anything about the Biograph, and he said, Oh yes, he had greatly enjoyed it at Johannesburg. I then enquired if he though I could get some pictures from them later on; at which he gave me a cordial invitation, saying he would speak to the General later on.” Weeks later, “on crossing a deserted camp we found our men had been reading the account of my doings with the Biograph during the campaign, and had left scattered about a hundred or more copies of the Natal Witness open at the article referring to this.” Still later, while departing Kimberley, “we amused ourselves counting the huge placards announcing the fact that the American Biograph would be exhibited nightly to show the war pictures.”

In the end, as amusing and appalling in equal measure as all this was, the reading project did not, in fact, help me escape the present. Dickson and his companions all end up getting sick and have to fight their way, weak and feeble, to primitive medical care, days after the incubation period clock starts ticking. When he finally makes his way back to Ladysmith, Dickson finds the town “dead as a door-nail; almost every shop closed, and nothing going on except the endless bullock transports coming in with food and fire-wood, besides a large number of waggons containing champagne and whisky.” Then, as now, liquor stores were an essential business.