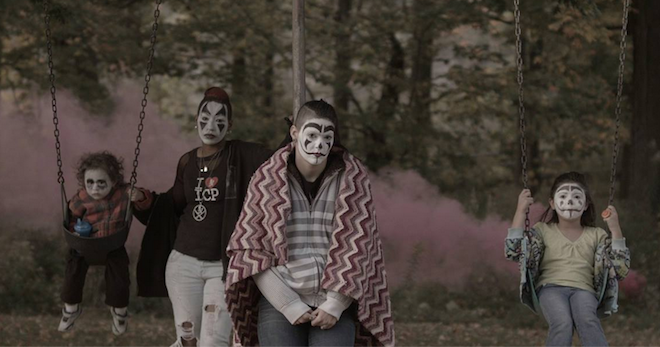 About halfway through my viewing at the Treefort Film Festival – predominately spent lounging on burlap sacks and church pews, repurposed for the inside of a tent – an anomalous, entirely welcome, framework began to take shape. At most regional festivals, the program tends to be a rather mixed bag, with titles culled from disparate, big name destinations, void of the necessary context for a non-industry crowd. But at the Boise-based, 2nd annual Treefort, the relatively compact, thoughtful selection of shorts and features appeared to be in constant dialogue with one another.

Take, for instance, the standing-room-only double feature of Scott Cummings’ Buffalo Juggalos and the secret screening of Alex Winter’s SXSW entry Deep Web. Cummings’ experimental documentary on the fervent ICP subculture in Buffalo, New York playfully riffs on the concept of “talking heads” by dedicating the first half of its runtime to still frame portraits of its subjects in their natural habitats. In lieu of relentless exposition, Cummings coaxes a more unsettling, silent posture out of his performers, that is at turns transfixing and frustrating as you yearn to grasp at the individual behind the face paint. A kneejerk response may be to accuse Cummings and the ace d.p. Nandan Rao of wielding an Arbus inflected lens on their subjects, but the exhilarating and playful collaboration that takes center stage in the second half of this ‘medium-length film’ should do to assuage that anxiety. Most memorable is a stunning, steadicam car robbery across a downtown intersection that’s definitely staged, but why not? The jarring contradiction of formalism and subject matter is what makes Buffalo Juggalos another exciting entry in the ever-expanding form of nonfiction.

If Cummings plies those limits, Alex Winter adheres as strictly as possible to the rote confines of an informational cum activist doc. A recount of the legal trials of the Silk Road and its persecuted, purported founder, Ross William Ulbricht a.k.a. Dred Pirate Roberts, Deep Web consists almost entirely of forum clippings and talking head interviews, with a touch of Keanu Reeves narration in between. (A friend joked that Winter may have taken The Matrix a little too seriously). Government ethics arise now and again, but to me, the most questionable aspect of the film was how one could take such a fascinating, pertinent subject, and filter it through such milquetoast direction. Alongside the likes of CITIZENFOUR, it could be mistaken for a “60 Minutes” episode. Indeed, by the time the curtain closed – inexplicably before Ulbricht’s sentencing, set to take place next month – I was appreciating Buffalo Juggalos all the more.

Deep Web was a small low point in a festival dominated by highs, not just on account of the rest of the program — which functioned more as a collection of compliments than contrasts — but in the experience itself. It would be egregious not to credit the showrunners, Benjamin Morgan and Ian Clark, both filmmakers and organizers of the nearby Eastern Oregon Film Festival, for their hospitality, as they went to casual lengths to include all attendees in any happenings afoot. Within hours of arriving in Boise, I was already welcomed into a cluster of Oregon-Washington based filmmakers, as we bopped from screening-to-screening to concert-to-concert and back.

Treefort is structured a bit like an intimate, crunchier version of SXSW, where the music portion is the centerpiece amongst storytelling, yoga, and hacking offshoots. Morgan and Clark knew better than to schedule films against the spirited post-9 pm acts, which drew block long crowds at venues like the local Shriner order, whose basement also functioned as a late night screening, feeding and boozing ground. As wonderful as the concerts were, less appealing were the lengthly sound checks for hometown heroes Built to Spill, which encroached upon a sizable chunk of the Borscht shorts showcase in our tent down the street. I was too close to the screen to be bothered, though Julian Yuri Roriguez’s narrative hallucinogen Lake Mahar would have caught my attention from the back row.

A bacchanal of white male anxieties brought to life, Lake Mahar’s protagonist is equally unsettled by the noises surrounding the titular landscape as he is at home with his porn star looking wife and two daughters, who share a whippet loving boyfriend – and it only gets crazier from there. The rhythmic jump cuts to a ringing telephone were a nice aperitif for the mind-blowing editing prowess (courtesy of Mari Walker) on display in Danny Madden’s latest, All Your Favorite Shows. Another paranoid piece of work, Shows conveys our obsession with screens and technology through seamless shifts between Madden’s animations and film and TV shows, alongside the parallel narrative of a boy who is being persecuted for his attachment to his iPad. Given ornana’s already impressive resume, it’s no small praise to say that Shows may rank among their best yet.

Much more meditative and open-ended was Terence Nance’s Swimming in Your Skin Again, which danced around the concept of spirituality achieved through the removal of one’s body or being. Though Nance’s images always intrigue – a roving, jungle-set game of megaphone telephone chief among them – the pat dialogue exchanged between his characters nearly pulled me from his orchestrated fugue. Perhaps more successful in the intermingling of abstract imagery and narration was Melanie Bonajo’s Shamanist exploration Night Soil/Fake Paradise, programmed as a standalone film at 32 minutes long. Bonajo dedicates her attention to one character at a time – where Nance hopscotches amongst his – which allows her to carry out a solo monologue on medicinal experimentation with a variety of supplemental, playful visuals that somehow make perfect sense, though something tells me that’s not what Nance was going for.

Other shorts programmed before features, like Sam Kuhn’s In Search of the Miraculous and Andrew Cividino’s Locarno-winning Sleeping Giant, were miraculously conjoined by the same image. Both films climax with a boy jumping from a high vantage point into a lake, but Kuhn and Cividino take opposing routes in pushing their characters to that brink. Miraculous is a 16 mm-shot, dialogue-less, dreamlike jaunt through an island town, where plot is more or less irrelevant. First and foremost, Miraculous is a showcase for Kuhn’s ability to max out a frame with bold textures and an arsenal of approaches, though he favors a nice, slow zoom. Less visually distinctive, Sleeping Giant still does a bang up job of capturing adolescent boys at their most goading, with Cividino drawing fantastic performances from his young leads and exquisite detail from their quotidian happenings.

If I’m leaving the features out, that’s only because I had the fortune of seeing them at other places and times, but I’d be remiss not to mention perhaps the greatest, complimentary double bill of them all: Kentucker Audley in Funny Bunny and Christmas, Again. In these two subtle variations on a lonesome, sometimes hapless, man, Audley achieves his own dichotomy, an interiority so vividly drawn it projects from the inside out. Though Gene of Funny Bunny is allowed his eccentricities, Christmas’ Noel grumbles away outside his own head, a place Audley somehow still lets us get sight of. His gestures, his reading, his timing are all the exposition you’ll need.

Even if you don’t have the narrative muscle Audley affords, Zach Weintraub’s Slackjaw proves that unexpected omissions can go a long way in a low-budget genre riff. Weintraub cameos as Austyn, a Portland dude who applies to become a human guinea pig at a company called EvCorp with his best friend, Rob (Robert Malone). Instead of peeling off with Austyn once he is selected for the trials in what would ordinarily become something of a sci-fi, Weintraub sticks with Rob, whose mental and physical states grow increasingly precarious in Austyn’s absence. The result is the most hipster, loose-lipped, ambient scored, psychological dramedy this side of, well, I’m not so sure. Stunningly shot in widescreen by Rao, with alternating pink and grey color pallets, the often meticulous blocking recalls a formalism that is both genres and decades apart. That, it seems, is Treefort. If you can’t find a counterpart within the festival, you’d be hard pressed to scare up one elsewhere.