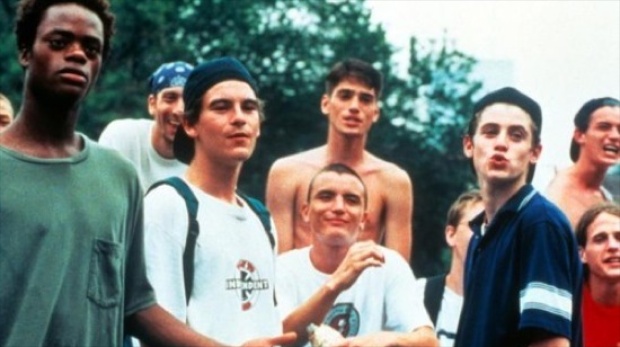 by Scott Macaulay
in Columns, Filmmaking, Screenwriting
on May 5, 2013

For Narratively, Carolyn Rothstein revisits the kids from Kids, 20 years later, in “Legends Never Die.” Chloe Sevigny and Rosario Dawson are stars, Justin Pierce and Harold Hunter have passed away, and the others are living their lives in diverse and at times unexpected ways. As her interviewees tell it, Kids was not just about people but a city:

The kids say the film was accurate, except for the most fantastical stuff. There’s no denying they weren’t sober during filming. Even the scene with Javier Nunez, at fourteen, by far the youngest of the skate crew, and three other little kids mashed on a couch smoking a joint and pontificating about god and life—that too was real. The virgin hunter, the AIDS plotline, and the rape scene at the end were fictional.

“But overall, that’s exactly what it was like,” says Jonny. “You ran around the fucking streets of New York. The city was just crazy at that time and things were different with kids. It’s certainly not like that anymore. I think that Kids is probably, to me, the last time you see New York City for what it was on film. That is to me a seminal moment in New York history because right after that came the complete gentrification of Manhattan.”

“Legends Never Die” is, as is everything on the Narratively site, beautifully designed. In terms of web design, I was also knocked out this week by this Pitchfork cover story on the British band Savages. The band ticks off so many favorite references for me (Wire, PiL, Au Pairs, Joy Division, Siouxie and the Banshees), the women look like they’ve stepped out of a Pina Bausch piece, and their playing is fierce. So far, I’m trying to figure out if all that early-’80s post-punk fetishism is more than canny appropriation. But the Pitchfork feature is great — the indie rock version of the New York Time’s Snowfall.

For the Hollywood Reporter, Tatiana Siegel reports on a new trend that is drying up rewrite work for mid-level writers:

When Sacha Baron Cohen needed to tweak his script for the Paramount comedy The Dictator, he hosted several roundtables in an effort to draw inspiration. Writers received a mere $500 each to sit with Cohen for an hour and bounce ideas off the star. That’s a far cry from the $250,000-a-week sum a studio might pay one of Hollywood’s top-tier scribes for a production rewrite (punching up a greenlighted script typically is a three-week job). But as studios look to shave development costs, the writer roundtable is becoming more popular. “Roundtables have effectively destroyed the weekly rewrite business,” bemoans one top lit agent. “One studio even tried to pay the writers nothing, but their legal department intervened.”

One year ago tech scribe Paul Miller swore off the internet. It was part personal experiment, part professional — the Verge paid him to file regular reports on his unwired life. He’s now plugged in again and files this report:

My plan was to leave the internet and therefore find the “real” Paul and get in touch with the “real” world, but the real Paul and the real world are already inextricably linked to the internet. Not to say that my life wasn’t different without the internet, just that it wasn’t real life.

At Hazlitt, Navneet Alang puts Miller’s experiment in context in “The Offline is the New Pastoral.”

Yet, Miller’s desire to escape the pernicious influences of the newfangled is hardly new. In fact, there’s a case to be made that imagining an unsullied alternate space that exists “just over there” is endemic to, and maybe even constitutive of, modern Western culture itself. It is a phenomenon perhaps crystallized by the Romantic poets and their fascination with the pastoral, the pristine countryside not yet ruined by the industrial revolution. Though there are many reasons to both adore and condemn Keats, Coleridge and their ilk—they are, after all, partly responsible for the obsession with individualism—we also borrow from them the veneration for the natural, the pure, the untouched, whether the rolling hills of the Lake District, or, as Wordsworth condescendingly thought, the “simple folk” who dwelled there.

The editors of N+1 tackle one of the enduring questions of left cultural theory:

The cultural nature of politics, the political nature of culture: these have formed the main quandary debated by left intellectuals, mainly among themselves (and there lies much of the trouble), over the twenty some years since the oldest of us went off to colleges where Theory and Cultural Studies were all the impotent rage. For two decades, our thinking has turned on this culture/politics axis, both when we were spinning our wheels and when it seemed like we were getting somewhere. There are always fresh phenomena for the familiar problematic: only recently, for example, have American intellectuals, “cultural producers,” and college grads with humanities degrees adopted a basically sociological understanding of culture, including their own, or have TV show-runners displayed a notable quotient of South Asian faces. Still, all new left-wing cultural-political analyses share an old question: is this or that cultural object shoring up an unjust society, or undermining it? The question applies not just to novels, TV shows, new diets, and social media platforms, but also, more uncomfortably, to the essays and books that we left intellectuals write about these things.

A large number — larger than you think — of independent filmmakers support themselves by teaching. But to make a real career of it, do you need an MFA? At Self Reliant Film, Ashley Maynor, who has one, considers the question.

Remember that San Francisco Film Society keynote by Steven Soderbergh, the one I wrote about last week that was said to be too incendiary to post online? It’s online. And below.

Finally, the Other People podcast this week talks to Matt Nelson, of the Mellow Pages Library. If you’re in Bushwick, you can head there and read booksfrom small presses. And drink free coffee. (Donations requested.) Colin Moynihan wrote about them for the New York Times:

Mellow Pages occupies a 200-square-foot room in a former industrial building on Bogart Street in Bushwick that Mr. Perkins had been using as an art studio. In addition to books, it is furnished with scavenged furniture, a guitar, a bottle of Wild Turkey and an ever-percolating coffeepot. About 60 people have joined since the library opened, and it has been the site of readings by some of the writers who are included in the collection.

Mr. Perkins, who spends summers working as a commercial salmon fisherman in Alaska, explained the appeal of the small publishers, which he said seem to be more willing to take risks than their larger counterparts and published books that were sometimes more original or exciting.

“We’re trying to get ahold of rarer things,” he said on Saturday, describing the library as “a free advertisement for people we want to support.”