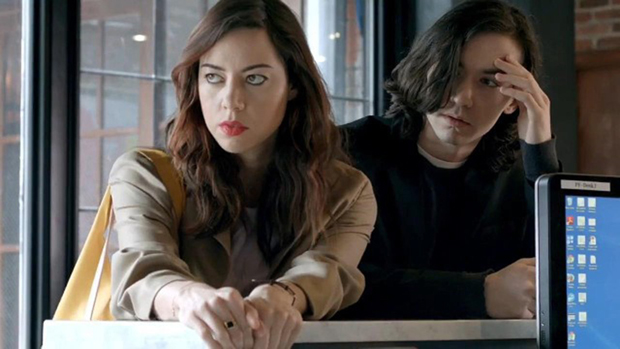 by Michael Sicinski
in Directors, Interviews
on Mar 31, 2015

When Hal Hartley arrived on the American filmmaking scene in the late 80s and early 90s, “indie film” wasn’t yet hardened into a niche or a brand. Possibilities seemed endless. Hartley’s debut feature The Unbelievable Truth, starring the late Adrienne Shelly, filtered humor and attitude through an unexpected rigor and formal seriousness. Like other early nineties filmmakers who have remained significant over the subsequent quarter-century (Haynes, Van Sant, Solondz), Hartley’s cinema has balanced a sense of specificity of place – many of Hartley’s films are rooted in the five boroughs, Long Island in particular – with international film culture and a broad global consciousness.

This unique engagement is exemplified by the films that have now become “The Grim Trilogy.” Henry Fool (1997), one of Hartley’s most well-known films (which also won the Screenplay award at Cannes), is the story of the titular figure (Thomas Jay Ryan), a wandering cad and would-be literary figure who befriends taciturn garbageman Simon Grim (James Urbaniak), coaxing him to write an epic poem which turns the world on its ear. Meanwhile, Henry impregnates Simon’s sister Fay (Parker Posey). The second film, Fay Grim (2006), stars Posey, who goes off in search of the missing Henry, at the behest of CIA Agent Fulbright (Jeff Goldblum). Apparently Henry was involved in some form of espionage, but Fay just wants to give her son a father, such as he is.

The third and final film, Ned Rifle (2014), is entering theaters tomorrow. Over the course of the three films, we have watched Ned and the actor who plays him, Liam Aiken, grow into a young man. In this last chapter, Fay is in prison for helping Henry, and Ned, a devout Christian, plans to locate his dissolute father and kill him. Naturally, things don’t go as planned. But Rifle (named after the pseudonym Hartley has customarily used when composing the soundtracks for his films) will indeed confront the Henry Fool within himself. (And, you know, the real one too.)

I spoke with Hartley about Ned Rifle and its relation to the other films, his filmmaking in general, and other assorted matters.

Filmmaker: How did you decide that Henry Fool was going to become a trilogy?

Hartley: Of course it didn’t begin that way. When we were shooting Henry Fool, we would often joke around on set, spinning out digressions about where the story could go aside from the script. It was just us playing around between takes and such. But we’d usually say, “that’ll be the next movie,” without ever really thinking there would be another film, much less two.

But in the time between Henry Fool and Fay Grim, I met up with Liam Aiken, who plays Ned in the films. We’d talk, and I wanted to learn from him whether or not he was really interested in pursuing acting. Henry Fool was his first role, and after that he’d carved out a pretty successful run for himself as a child actor. In time I discovered that not only was Liam a serious actor, he had evolved into the kind of patient, engaged actor I work best with. He’s really come into his own, and yet he also has a somewhat similar quality, a kind of stillness, that reminds me of Robert John Burke and Martin Donovan and Bill Sage – the guys from back at the beginning.

Filmmaker: That comparison seems to relate to certain thematic aspects of your work. Many of your films, beyond the trilogy, seem to be about family resemblances, genealogy as destiny, or the question of freedom versus fate or “thrownness.” Ned Rifle complicates this in new ways by making Ned a devout Christian.

Hartley: I would put it this way. Among other things, I think my films are about responsibility. How are we responsible to and for one another? And how does that determine the choices we make? Henry is a character whose lack of responsibility has far-reaching effects. This is part of why I thought that the Grim family could be at the center of a group of films. How can the same central set of problems be examined through different angles of the prism?

Filmmaker: But almost everything that happens in some way comes back to Henry’s selfish, impulsive behavior.

Hartley: Yes. So in Fay Grim, Fay suffers because she feels a responsibility to Henry and to Ned, a sense that Henry doesn’t exactly share. But in Ned Rifle, Ned’s Christianity, in the beginning, is a kind of moral absolutism. He knows that Henry is evil and that’s that. Over the course of the film, Ned experiences trials, and most of all encounters [stalker] Susan, and he is changed. His faith evolves from dogmatism to something earned, an experience that has instilled true empathy in him.

Filmmaker: [SLIGHT SPOILERS FOR NED RIFLE] In the final scene of Ned Rifle – in fact, the final two shots – you depict the bringing together of Henry and Ned, and at the same time their definitive break. You can’t avoid family, but you can make different choices.

Hartley: Henry has been running from everything his entire life. It made sense to me that the Grim trilogy would need to be about someone who breaks that pattern and accepts responsibility, for himself and for everything before.

Filmmaker: When Ned slowly raises his hand, the gesture is fairly Bressonian. It’s as though Ned has achieved a state of grace.

Hartley: And he’s accepting of whatever comes at him as a result of what’s happened. It’s like he’s telling the world, “Okay, give me what you’ve got. I’m ready.”

Filmmaker: We briefly touched on the role of Susan in this film, and as you said, she plays a vital part of Ned’s earthly education.

Hartley: Right. When Ned goes to church late in the film, he asks God about Susan. “Have You sent her, placed her in my path to keep me from sin?” Ned and Susan become friends, but she also allows him to see Henry in a different light.

Filmmaker: But at the same time, finally meeting Susan clarifies the nature and extent of Henry’s sins. She was the underage girl he slept with, the return of his primary transgression.

Hartley: But that’s not all Susan is. Ever since Henry Fool, when Henry describes her to Simon in such glib, nasty terms, I felt like I wanted her to return. Henry, if you’ll recall, says he “was caught in flagrante delictum screwing a 13 year old girl named Susan” who was “an ugly and mean-spirited kid.” Who was she? How did she grow up?

Filmmaker: When Susan and Henry discuss their sexual encounter from back then, I must say, the way your characters articulate it takes Ned Rifle onto some pretty provocative ground. The usual legal and moral boundaries of victim and abuser that govern the concept of statutory rape are not the ones that guide Susan’s recollection of the tryst.

Hartley: Yeah, I knew I was writing something that could provoke anger from some. But when shaping Susan’s character, I didn’t want her to just be a victim in the scenario. As a 13 year old, she has the right to sexual desire and exploration. It’s important that she be able to speak to that.

Filmmaker: Ironically, it’s Henry who is trying to explain to her that what he did was wrong, that he was an adult taking advantage .

Hartley: Right. And that’s another thing. I thought that, in the end, wouldn’t it be ironically appropriate if, after all the bluster and bravado and supposed libertine behavior, Henry Fool was at his core just a normal guy with completely predictable middle-class morality? But to go back to Susan, the other thing to remember is that, even if she does affirm her own responsibility and desire in being with Henry at 13, we can also see that she is a troubled individual. She didn’t emerge unscathed by any means.

Filmmaker: Susan’s impact ripples throughout the film. The last time we see Simon, he is writing her name on a composition book.

Hartley: I took that to mean that she would be central to Simon’s next poem.

Filmmaker: So we can assume he’ll back off from the online stand-up comedy?

Hartley: You know, Simon went from being the garbageman to a Nobel Prize winning poet and then going to prison. I saw the comedy idea as a way to think about the limited attention that even the most successful artistic producers get, compared to people working in popular culture. That temptation to try to connect to a different audience through broad humor, it’s a genuine impulse. He goes back to poetry, but like Simon says, after all he’s been through he maybe really can start to “confront [his] inner clown.”

Filmmaker: We don’t see Simon’s act, of course, just as we’ve never heard any of Simon’s poetry, or seen or heard any of Henry’s “confession.” Since the texts were empty spaces, they could shift their meanings. For instance in Henry Fool it’s clear from Simon and his publisher that the Confession is drivel. But then, in Fay Grim, it becomes a potential series of espionage documents, so it’s . . .

Hartley: Coded drivel? [laughs] I think that change in the interpretation of Henry’s journals has to do with time and history. The world is really shifting around the text, giving it new meanings and putting it to different uses. That could be emphasized by the plot alone, but I do think that the formal decision to treat the texts as an absence helps to put that idea across.

Filmmaker: Let’s talk about that more broadly. How do you decide what sorts of formal elements you’ll explore in a given film? Do you set out to construct one type of film over another at certain points?

Hartley: No. It’s really a matter of following what I see as the imperatives of the story. And that includes the structure and organization of plotting. For instance, Fay Grim had a lot of spy and noir elements, and once I stepped back I saw that it was plotted in a very intricate way. Lots of strands. I felt like I wanted Ned Rifle to be simpler, more linear.

Filmmaker: Do you sketch these structural ideas out in your short films?

Hartley: Not really. My short films are complete unto themselves, fully formed narratives. But Ned Rifle’s organization was largely influenced by my recent short feature Meanwhile. That film follows one guy, Joe Fulton (D.J. Menzel), as he goes from one situation to the next. I found that a satisfying way to build the film, and so I took that approach with Ned Rifle to some extent.

Filmmaker: Meanwhile is a lovely film, a character study of a guy who goes around fixing things, helping people, making the world better wherever he goes.

Hartley: Yeah. I guess Joe Fulton is the anti-Henry Fool.