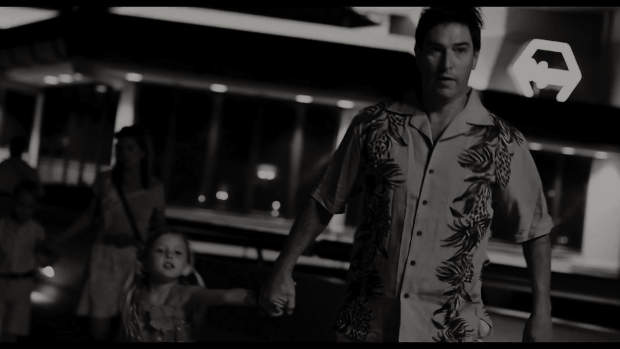 There’s something the Sundance Film Guide didn’t tell you about Escape from Tomorrow, the first narrative feature from director Randy Moore – the film was shot guerilla style, on location, at Disney World. Seriously.

A debut for the ages, Escape from Tomorrow takes viewers on a surreal journey into the mind of family man Jim Walsh on the last day of his vacation at the park. After finding out that he has been unexpectedly laid off from work, Jim’s day derails until he’s bordering on a complete mental break. This is deranged, imaginative, destabilizing filmmaking – a magical film about the search for magic in a world devoid of any.

Escape from Tomorrow premiered last night as part of the Sundance Film Festival’s NEXT Category. Preceding the premiere, Filmmaker got  a chance to speak with Moore.

Filmmaker: Tell me a bit about the genesis of the film. Was Escape from Tomorrow inspired by any particular personal experiences?

Moore: As a child, I enjoyed a very surreal and magical amusement-park upbringing. My father, who I loved deeply, but who was a complex man, introduced me to these “magical” wonderlands of escape, which were like living in a dream world of pure imagination. Nevertheless, at some point, the settings we physically inhabited began to merge with our emotions and became strangely linked. Then time passed, and I had children of my own – and it wasn’t until our first family trip together that this very visceral emotional landscape of my past, that I had by now nearly all but forgotten, hit me again like bullet. And I became obsessed with finding the connection.

Filmmaker: How did you settle upon the film’s location? Did shooting there prove challenging?

Moore: There was nowhere else to do it. It just had to be done there, but the actual shooting was a nightmare. We rehearsed each day’s dialogue in the morning, usually in my hotel room. The schedule was extensive and planned carefully weeks ahead of time to coincide with the direct location of the sun during each shot. There was no crowd control. I had to block the scenes with just the actors, then pull them aside and bring in our DP and usually the “B” camera operator, while our AD stayed back with the cast and waited for their cue via an iPhone.

Takes were usually limited to just three or four before we’d arouse suspicion and have to go someplace else – it really all depended on the amount of traffic and visibility and the time of day. The night stuff was a little easier. Nevertheless, we must have walked through the entire movie at least eight or nine times during multiple scouting trips before we ever rolled camera.

So it wasn’t like we weren’t prepared, but the whole thing was still extremely distressing as we basically lived the movie with the actors. At one point, I even made the camera department shave off their facial hair and dress in tourist attire, which almost provoked a mutiny.

Filmmaker: You describe the film as a “post-modern fairy tale.” How did that concept develop, and who were some of your chief influences?

Moore: I used the word “post-modern” to describe the film because apparently some people were confused by the story. So I’d say: oh, well, it’s post-modern, and they’d just stop asking questions. But it’s actually a very suited term in that post-modernism began in the 1950s, and it relates heavily to the concept of our individual minds constructing their own personal realities, even allowing for plural realities to run simultaneously and sometimes overlap. And perhaps that’s why I’m currently obsessed with Paul Thomas Anderson’s The Master, which I would watch everyday if I could find the time.  Besides that, I’d say my influences are David Lynch, Gus Van Sant, Guy Maddin, Terrence Malick and, of course, Stanley Kubrick.

Filmmaker: What was the reasoning behind shooting in black and white?

Moore: It wasn’t until after I started circulating the script and scouting locations that I made the resolution to shoot in black and white, but I always knew from the get-go that I wanted this film to have an eerie, dream-like quality, and, above all else, not feel like a home movie. Plus, I’d never seen this “world” in black and white before. So when we starting playing with some of the test footage, right away all these really interesting things started popping out, and there was no other choice. It felt like I’d discovered a secret and hidden world.

On the technical side of things, we also knew that we were going to have problems matching our backgrounds in color. Not to mention that we were shooting with really fast lenses wide open, so our depth of field was razor thin. Black and white helped us enormously with focus and composition, since we were doing almost everything in camera and didn’t use a focus puller or have a video village setup; and because the 5D doesn’t shoot RAW, we customized settings in its monochromatic mode and couldn’t go back to color, even if we had wanted to.

Filmmaker: What types of audiences do you hope to reach with Escape from Tomorrow? What do you want people to come out of the film thinking about and feeling?

Moore: I hope that every human being on the planet sees Escape from Tomorrow! But who doesn’t honestly want that for their first film? Fortunately, I think the movie works on multiple levels, so hopefully there’s enough pomp and circumstance to satisfy and frustrate everyone equally. I’d like people to come out of the film thinking about the hidden nature of all things, and feeling special.