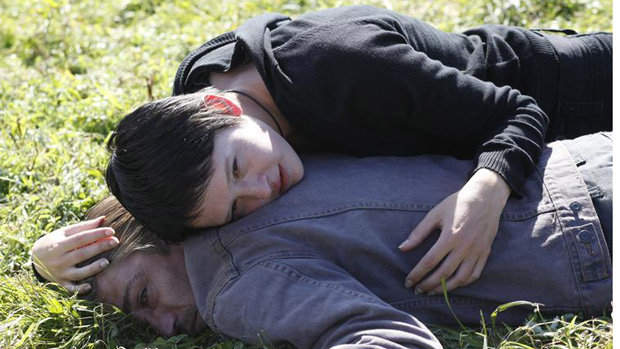 An abiding presence at the Cannes Film Festival, where he has twice won the Grand Prix, French writer-director Bruno Dumont (Flanders) is arguably one of the most celebrated and least understood auteurs of the contemporary European film scene. Hailed as a neo-Bressonian wunderkind for his remarkable debut Life of Jesus (1997), a portrait of grinding life among provincial French youth, the onetime philosophy teacher returned two years later with Humanité, an opaque detective story that baffled many observers and even incensed some of Dumont’s staunchest champions. Subsequent films, the notoriously carnal Twentynine Palms (2003)— a kind of metaphysical horror exercise staged with late Leos Carax muse Katia Golubeva and unknown David Wissak in California’s Joshua Tree National Park — and Flanders (2006), yet another Cannes Grand Prix winner, further divided cineastes. Dumont’s astringent materialism – the emphasis on sensory details and landscape (especially in and around his hometown of Bailleul, where he has filmed many times); and the moral ambiguities and inexplicable motivations of his characters, which, with the exception of Julie Sokolowski’s Céline in Hadewijch, more closely resemble automatons than people – can feel like bait for those who love to puncture the pretensions of traditional art cinema. But for all the provocation, there is something mythic about Dumont’s anaerobic, often ugly depictions of sex, social politics, and life itself. His most explicit techniques—the use of direct sound, wild landscapes, blunted performances—are not clues to a given film’s “meaning,” but the very point of his cinema.

Dumont’s latest film, still without a distributor, is Hors Satan (Outside Satan), which premiered at Un Certain Regard in 2011 and screened this month as part of the Museum of the Moving Image’s First Look series. A drifter (David Dewaele) who lives in a makeshift shelter on the Côte d’Opale shore (a few stacked bricks next to his campfire block the wind) has an intimate friendship with a lanky young emo girl (Alexandra Lemâtre) in a nearby town; she feeds him loaves of bread and they spend time lounging on the meadows, but to her dismay, he rebuffs her romantic advances. Their closeness deepens after he kills her stepfather, for reasons that are only hinted at (sexual abuse), unlocking a cycle of violent acts that engulfs the local community. An air of mystery surrounds the craggy-faced drifter, a man of worship twice seen kneeling in prayer in the twilight, his folded hands and rapt face echoing faded illustrations of Marian visionaries. Regarded as a spiritual healer by at least one woman, who seeks him out to minister to her catatonic teenage daughter, upon whom he performs a strangely lascivious exorcism, Dumont’s laconic anti-hero is neither divine nor demonic, despite his apparent ability (glimpsed in one eerily gorgeous sequence) to conjure fire. This dualism is never resolved; it is set to spin like a gyroscope. Though Dumont’s thematic interest in religion and morality persists from Hadewijch, the film’s reality is not the world’s. Instead, we are confronted with profane Nature — instinct and wildness, in many guises — as well as a few (supernatural) puzzles, then left to decide the undecidable for ourselves.

Filmmaker: With the exception of Twentynine Palms, you’ve shot your films in the north of France, either in and around your hometown, Bailleul, or in the case of Hors Satan, on the Côte d’Opale. What keeps your imagination rooted in this region, assuming it’s more than a matter of logistical convenience or familiarity?

Dumont: A man’s relationship with his place of birth is unique; it requires no explanation, it is simply there and it belongs to me. It is the most natural, the most powerful landscape, it is the beginning of everything. I am bound to it with all my being, my blood flows through it. There is a mystical and sacred bond between me and that place, in all its immensity and profundity. It also quite naturally provides material for introspection, for a cinematographic vision of the world. Its very specificity provides the backdrop for this quest for a universal truth embodied by the cinema. The same applies to actors: their own local identity provides a foundation without which their transfiguration for the cinema could never take place. Take Jean Epstein at the beginning of the thirties, for example. Weary of aimless commercial cinema he took himself off one day to Brittany to film exclusively there, with Bretons. Film a region, whichever it is, and the door is opened to filming the whole world.

Filmmaker: Several of the beach tableaux in Hors Satan put me in mind of Eugène Boudin. Is there a meaningful sense in which you would consider yourself a landscape artist?

Dumont: A limited cast of characters obviously means a more preponderant role for the landscapes in which the protagonists stand opposite each other. The filmed landscape is no longer a real landscape, but a cinematographic representation of the filmmaker’s perception of it. Films have little to do with reality. The shots express the tumultuous sound of our feelings. There’s nothing metaphysical about cinema: it is physiological.

Filmmaker: The inner worlds of Hadewijch and David Dewaele’s drifter in Hors Satan, while presumably tethered to personal faith, are nevertheless opaque and ambiguous to the viewer. Are these films moral investigations, attempts to clarify something for yourself about belief or human motivation?

Dumont: Cinema is the ideal mode of artistic expression that takes us beyond the natural scope and gravitational pull of our reason. Thus we are able to project ourselves beyond the notions of good and evil, transcend our human condition or descend deep into the abyss. Our understanding of the world about us is enhanced because, like astronauts walking in space, we are looking on from outside. It is a trip.

Filmmaker: What is it about the conceits of Judaeo-Christian spirituality (loaves of bread, water purification, miracles) that interests you, given your atheism?

Dumont: Religion, it seems to me, should go back to the theatre where it belongs. God is in the right place in the cinema and we spectators are at the right distance. We can believe without putting ourselves in danger. Cinema is a good superstition because it is the height of poetic expression. Art is the source of spirituality; poetry is pure.

Filmmaker: The drifter’s actions allow us to align him with the holy, on one side – he is a healer and a conjurer, of sorts, who prays—and with the demonic on the other, given his acts of violence. Would you say the “outside,” where this film is concerned, is akin to basic human instinct, which is neither good nor evil?

Dumont: Yes. The film is situated at our origins, beyond good and evil, in that place of which each and every one of us is a small part and within which we are regenerated. It is the natural, wild and mythical state of the human condition from which we must continually strive to emerge in order to remain civilized.

Filmmaker: The faces and unconventional physical appearances of your actors are yet another marker in your body of work, another landscape for viewers to explore. Do you choose your actors “ready-made” for any specific reason apart from their unique, individual physical traits? Humility, for instance?

Dumont: Yes, actors, like landscapes, come ready-made. They must already be in harmony and of the same essence to produce the huge shockwave that constitutes a film. The same need to strike the right chords to create harmony exists in music, for someone like Mahler, as in painting, for someone like Van der Goes, for example. The art of cinema is to achieve that harmony among the shots that make up a film. To arrive at that final result requires various specific choices to be made with a view to the overall composition and final orchestration.

Filmmaker: You have a very specific sense of time and rhythm that harkens back to an older tradition of European filmmaking. Would you say these aspects of cinema are ultimately more important than character?

Dumont: The actor is not the dominant factor; he is a psychological element struggling within an indistinct physical mass of which the film is the test. Tempo remains the most delicate issue, for it determines the structure of the composition to be performed before your eyes. The pacing of the film is decisive, whether to go fast or slow. Slowness from time to time needs the contrast of its opposite, or else we tire of it. So we need a rhythm for the spectator’s benefit. But slowness is the dominant biological pace – the slowness of daybreak or of a lump of sugar dissolving in water – the culmination of that slowness is death. Slowness is majestic and is clearly accessible to our minds. Speed is nothing but a distraction from that slowness, a variation, an expression of impatience.

Filmmaker: What do you think draining performances of affect in the manner of Bresson allows you to achieve today in a more contemporary film storytelling mode?

Dumont: Bresson was a Catholic artist in terms of both the substance and the form; his asceticism was his form of expression. Religion, which is nothing but poetry, quite naturally comes into its own here. The same applies, for France, and at an earlier date, to Péguy, Claudel and Bernanos in the world of literature. In the history of art – which is so closely bound up with the history of religion – Catholic artists were the most inspired of all believers because they got to the real substance of religion: they disclosed, precisely, its poetic nature; through theatre, literature, cinema they revealed the superstition and mystification of religion in spite of themselves. The poetic, spiritual and mystical transfiguration of art was updated to include religion as nothing more than another form of expression, a kind of theatre. Truly modern man – the one who will at last have moved away from religion – will find his spiritual sustenance in art. Hors Satan is a modest attempt to prefigure, in it own way, this new emergent world. It is a prehistoric, a primitive film.

Filmmaker: What’s shifted for you in Hors Satan in terms of your compositional style and your more hands-on role as an editor of the film?

Dumont: In Hors Satan, the staging of the film at last dominates the field; the camera and ambient sounds take center stage and the actors bow to that and always position themselves accordingly. The filming equipment has the upper hand. I’ve done it the other way round in the past.

Filmmaker: Is faith in cinema a kind of religion?

Dumont: No, it’s religion which is a kind of cinema!