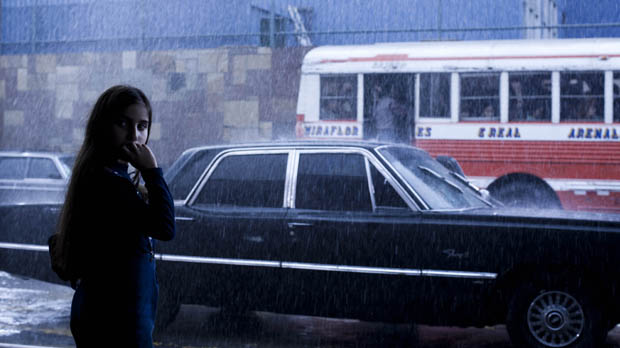 Cayetana de los Heros, the eight-year-old protagonist of The Bad Intentions, is precociously preoccupied with death. She idolizes her nation’s independence heroes, imagining the many exotic ways in which they have been executed for their valor. “Massacre, massacre,” she whispers into the ears of her sleeping cousin. Beautifully shot in steely gray and blue hues that look cold to the touch, The Bad Intentions moves away from the conventional pastel-hued whimsy often used to depict childhood. Death — the fear and the fact of it — quietly pervades the entire film. Cayetana’s divorced parents mean well but have too many private dysfunctions of their own to dispel their daughter’s persistent loneliness. Learning that her mother is pregnant, hyper-imaginative Cayetana comes to believe that she will die the day her brother is born and prepares herself for this mortal sacrifice. Her morbid fascination parallels the burgeoning terrorist violence in 1980s Peru — but the film forgoes the hard politics of this period in Peruvian history, focusing instead on its ghostly echoes in Cayetana’s childhood.

The Bad Intentions (in Spanish: Las Malas Intenciones) is the first feature film by Peruvian filmmaker Rosario Garcia-Montero, who was named one of Filmmaker’s “25 New Faces” in 2004. Now, years later, Filmmaker reconnected with Garcia-Monteros to discuss her inspiration for a film concerned with childhood, the challenges of working with young actors, and the development of her complex protagonist. The Bad Intentions, which premiered at the Berlin Film Festival this past February, has been selected as the Peruvian entry for the foreign language Oscar at the 85th Academy Awards. Voting begins on December 20.

Filmmaker: The Bad Intentions strikes me as an uncanny depiction of childhood, particularly in the scenes of dark comedy, where Cayetana makes poor choices out of genuine good will, and her lines, in which she conveys the simplistic but pure wisdom of children. What inspired you to make a film about childhood?

Garcia-Montero: The appealing, revolting and surprising [experience] of being inside a child’s perspective. While as a child, I didn’t grasp the full significance of what was going on, I was nonetheless absorbing those ominous feelings by observing the behavior of my parents. It was when I realized this, that a crucial inspiration for The Bad Intentions was obtained: a script with an inner voice — an inner gaze — that seems completely detached in its absurd tendencies, but is actually deeply rooted in precise and specific traumas, that are both very local and universal at the same time.

Filmmaker: Cayetana and her cousin, Jimena, are key characters in the film. What were the challenges of working with a young cast?

Garcia-Montero: The main challenge was knowing that anything could go wrong! Having two main girls acting, plus all the animals — canaries, dog wranglers, kittens, guinea pigs (cuys)… I had been warned a lot in film school in New York and decided to just go with it and do it. But my girls were real professionals, and thank God we rehearsed every day, because during shoots, we had no time for that — only time to capture their freshness, maybe on the first or second take. After that, a kid loses his/her spontaneity, so my crew had to be very well prepared to grab the moment on the first or second take. 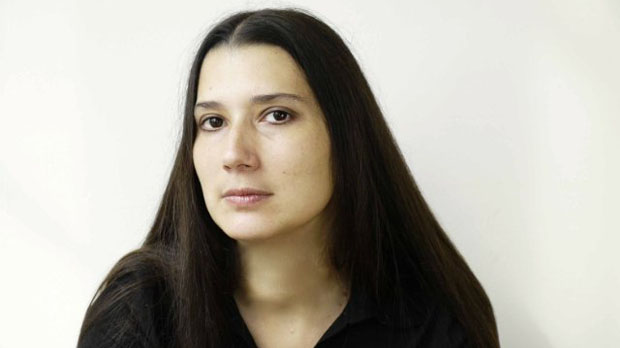 Filmmaker: Cayetana is a surprising character, in that she doesn’t exhibit the sweet, wide-eyed innocence of an archetypal child. She’s rather dark, and even unlikable at times. Can you discuss your process for developing this character? How did you know you had found the right actress in Fatima Buntinx?

Garcia-Montero: Cayetana had to be very humane. The empathy had to [go] a whole long way. In the script, every time Cayetana did one good thing, she had to do three bad things to sort of balance on this thin, thin line. So it’s always a challenge to stand with her. That was my biggest challenge as a writer: keeping the audience in an active mode, to always be on that threshold of not liking her but feeling at times touched by her.

I had been looking for Cayetana for some years, 2007 to 2008. It’s tricky when you are asking for money for a film with a child protagonist. They want you to present to the jury the most accurate cast of who they would be, but when they don’t give you the money, you must let that young cast go, because they will inevitably grow up and not work anymore for the character. That happened once in my process, and it was hard to move on, so I decided never to cast Cayetana again until I had all the money — which meant, maybe a couple of more years of waiting for the financing! My script said “9-year-old girl,” so I went to Peru to start the casting process of a 9-year-old girl, and the girls that I would find were almost adolescents, grown-ups. Embarrassed about rehearsing, full of modesty.

So I realized I needed to change my plans fast. I began to cast younger girls, and Fatima Buntinx showed up one day. She was sitting in a chair, very nonchalantly talking to us. She talked as if she didn’t care about the casting and the film, she told us about her 15 canaries and one rabbit, she told us the conspiracy theory about a boy who stole things from the lost-and-found area in her school, she told us she had been rejected for some other casting. So I thought that was perfect. But she was 7 years old, and even though she had the spontaneity that the older girls lacked, she could hardly read, and the script is 99 percent Cayetana’s dialogue. A week later, Fatima called me and said, “By the way, I just turned 8 years old,” so that’s how I got convinced by this little girl and decided to work with her. I needed to convince myself that it could work, and I’m very happy that it did.

Filmmaker: In the background of The Bad Intentions is the increasing terrorist violence in Peru. But your film does not seem to make this the central drama, focusing instead on Cayetana and how this environment of violence/tension may register to a child. What were your approach and goals in the interweaving of the broader historical context and Cayetana’s story?

Garcia-Montero: The Bad Intentions combines drama with elements of dark humor, in an effort to process my own personal memory and the social memory of my country. In the early ’80s, the first symptoms of violent actions by the Shining Path began to emerge. In this scenario, Cayetana is a girl who feels threatened by the upcoming birth of her future brother. “Two suns cannot shine together in the same sky” is the phrase related to the Peruvian independence war that she repeats from her history books. Thus, the date of the baby’s birth would determine her own expiration date, her own death — two ominous situations highlighted by Cayetana’s perception that the very day her mother enters into labor, the terrorists announce their attacks in Lima through the cruel and mystifying device of hanging dogs at representative landmarks of the city.

Filmmaker: This is your first feature-length film. How significant of a departure was this from the shorts you’ve made, and what were some lessons gleaned from this transition?

Garcia-Montero: The painful transition from short to feature can take forever. After my short Are You Feeling Lonely? showed at Sundance, I wanted to write something fast, but it took forever. Then an idea to write a long short began, and that is when I thought that it would be better if I keep developing that short into a feature. But no writers lab would pick me because it was too raw. So these wandering years began — just writing and trying to find someone interested in the United States, but I knew that this film had to be in Spanish, so it was hard to find producers. So I began the process the way every Latin American film goes: find European co-production. In 2007, I got into the Berlinale Talent Campus, and their talent project market and my film was in the co-production market, and my co-production deals started officially.

Another thing that I felt I needed to do in the feature film was to take directing/acting workshops in New York. For a year, I did that. Most of the times, struggling filmmakers are writers and producers, so I felt I had lost touch dealing with actors. Those workshops helped a lot and gave me the confidence to go back to Peru and communicate with my actors. So after five years of waiting, I had to run and shoot the film in two months and edit in six months. I finished the final mix in Argentina at the end of January, and by February [2012], the film was world-premiering at Berlin.