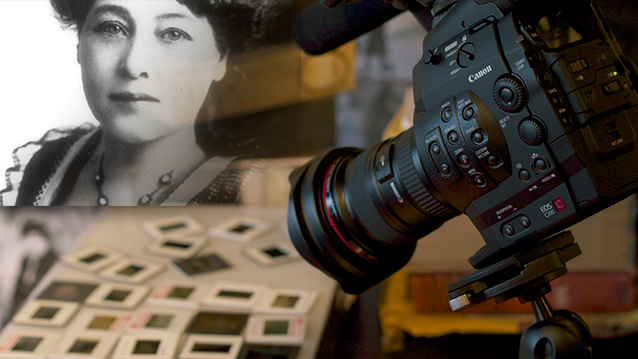 Filmmakers Pamela Green and Jarik van Sluijs have worked on documentaries in various roles including as co-producer of the Emmy-nominated documentary Bhutto. Their company, PIC Agency, has produced titles for movies including 42 and The Kingdom, and they have also produced content for award shows, commercials and other productions.

“People come to us to add to the story when you can’t turn the camera back on,” says Green. They have specialized in creating new content by combining graphics, stock footage, new footage and editorial. These techniques should be especially useful for their first documentary, Be Natural, about the first female director, Alice Guy-Blaché.

Filmmaker recently spoke to them about this project, which is currently in production. They are raising funds to complete the project through a Kickstarter project.

Filmmaker: As first-time directors who have been involved in other projects, has the process been what you expected?

Green: It’s exciting. We’re not about titles, we look at everything that we do as a project and we get excited just being able to tell this amazing story. There’s a lot of similarities in research and putting the pieces together as we’ve done on previous projects, but this is obviously more fulfilling because we’re creating it for ourselves and hopefully for an audience who will see the joy that we’re putting into it.

Filmmaker: How did you come across the story?

Green: It was probably 11 or 12 years ago, back before AMC was carrying Breaking Bad or Mad Men, it was actually a little more female-oriented, and they had a show that was called Reel Models: The First Women of Film. It was a show with Barbra Streisand, Hilary Swank, Shirley MacLaine, Susan Sarandon and Minnie Driver talking about early filmmakers and Alice Guy-Blaché came up and I was kind of surprised that I had never heard about her.

Filmmaker: How did she come up?

Green: They were talking about Mary Pickford and Frances Marion and it was a very short snippet in the piece. I was shocked because it wasn’t just the fact that she was the first female director, it was all the other accomplishments that followed at such an early time.

Probably five or six years ago, I told Jarik about it and we were doing more of these storytelling pieces for the studios and independent documentaries. We had the opportunity to work with Robert Redford on a couple of his films and it just felt like it was the right time to bring it up and get his thoughts on the subject. Of course he had never heard of her either, and we realized that we just had to tell this story.

Life has a way of bringing you back to things that you are meant to do. I do believe in destiny and I really think that Alice chose us to tell this story because we have all the pieces and the tools and the approach to be able to do it, and hopefully cement her in history. Filmmaker: How do you put together a plan to make a documentary like this?

We expected it would be hard, we expected some level of discovery, but the amount of discovery and the way that we’re discovering stuff, we could never have imagined and it’s becoming part of the documentary.

From the beginning, our approach was about seeing all the similarities in the revolutionary time that she lived in as far as technology, and the big changes that are happening right now in moving from analog to digital.

Green: I think it’s also about humanizing her. What makes this woman get up one day and say she’s going to pick up a camera and make films in a time where women can’t vote? And then she comes to this country, can’t even speak the language, and starts her own studio.

Filmmaker: How are you handling the old footage?

When she passed away there were three known films, but she made over 1000, whether she directed, wrote or produced them. There’s 28 archives around the world that have her films in different formats. Jarik went to Holland and one of her films is sitting there on nitrate; it was attributed to someone else. We’d love to be able to get that restored and included in the film.

Filmmaker: What are you shooting the interviews with, and why did you choose that camera?

Green: We’ve done a lot of work with Light Iron and they introduced us to Canon, which we were beyond delighted about. What we’re doing with the Canon C300 is pretty much shooting the interviews and everything; it’s an amazing camera.

Van Sluijs: We’re also using it whenever we’re going in the field for research. The reason we love it is because we’re on a budget and we’re able to use the same lenses that we use on the 5D and Rebel. We’re able to interchange them, and it’s small enough to carry everywhere, it’s compact enough and modular enough to turn it into anything from guerrilla-style shooting to something on a tripod. The dynamic range is great, and the fact that it has a built-in ND filter so when I have to follow somebody from inside the house into the garage because they want to show me some photos in a box, then I can just flip that on. It’s been great. Filmmaker: What lenses are you using?

One very important thing, which I’m sure you’ve heard a thousand times, is pay a lot of attention to your sound recording, because that’s the most important thing.

Filmmaker: What are you using to record audio?

Van Sluijs: We started with a Zoom H2n, which has been great, but we’ve graduated to a lavaliere that we just hook up through the XLR directly into the C300. That’s giving us better sound, but we’re looking into going even better with a boom. So we’re also learning as we proceed, because we’re bringing stuff into the Avid and looking at it and listening to it.

Van Sluijs: For the interviews, we do bring lights. All we add are LCDs and some reflectors.

Green: We’re always ready. We have everything ready to go because you just never know.

If somebody thinks that they know the story that they are going to tell at the beginning, they better think again, because once they look at the footage it becomes something completely different.

Filmmaker: What are you editing in?

Filmmaker: Where are you right now in the project?

Believe it or not, even having Robert Redford as an executive producer, and Jodie Foster narrating, it’s still very hard to get funding. Hollywood doesn’t want to make these movies.

Filmmaker: If Hollywood is not interested, why not go for another distribution?

Green: Well of course we will, but Alice started in the movies and she belongs in the movie theaters.

Van Sluijs: Part of our background is in animation and design and we are bringing a lot of that to the documentary and using it to create the worlds and the spaces that Alice lived and worked in. For example, we went to Fort Lee where her studio Solax was, which is now a parking lot. Through a combination of photography and video and old photos of the studio we are recreating it through CG.

Using that as a tool has been essential in telling stories for other films that we have worked on because sometimes you’re looking for that piece of footage that just does not exist and you’re going to have to recreate it out of snippets of information that you have elsewhere.

Filmmaker: What software are you using to do this?

Van Sluijs: We use Maya and Cinema 4D, and then the animation is mostly in After Effects.

Filmmaker: Any advice on how to shoot plates for these types of shots?

Van Sluijs: We have some photos of an exact angle for the studio, and the big advice would be to study what lens they are using in the photo before you go out there. Green: It’s one of the coincidences of Alice. We were at a friend’s house for dinner and he was there and coincidentally he was going to do a story about Alice on his blog. Obviously the biggest coincidence is that he shot Ordinary People, so we thought that was funny.

He fell in love with the story and with our approach, and it’s been great because we get to talk about the new technology and the old. He’s interviewed along with Dino Everett, who is the archivist at the USC Hugh M. Hefner Moving Image Archive, and we’ve been testing some old cameras.

Filmmaker: You’re going to shoot on old equipment? On nitrate?

Van Sluijs: The idea behind this is to put the viewer in Alice’s shoes, and realizing why they weren’t moving the camera, and why they were getting the shots they were getting and showing that the accomplishments are very great because of the limitations of the technology. Of course, they didn’t see them as limitations then, they saw them as amazing, the same way that we think that the digital cameras of today are amazing.

Green: A lot of people say, “She’s not like D.W .Griffith, or Cecil B. DeMille.” Well, of course she’s not because she’s earlier and the equipment was different. It’s like asking somebody to shoot with an old video camera and comparing it to the C300 today. Forget it, it’s a completely different medium.

It was changing so rapidly back then, just as it’s changing now, and there were camera wars happening back then, just like they are happening now, so there’s a lot of that stuff that we are going to be talking about and about the beginning of moving images. It’s really cool.

Filmmaker: Any advice to people doing their first documentary?

Green: Get a lot of help.

Don’t try to do everything yourself. Get people to help you with research and planning and organization because your time just gets sucked right out of you very quickly with a subject like this.

Also, it’s better to sometimes step away, and it’s okay if you don’t know about something. Be open to being curious and exploring on your own. It might be a little more painful, but I think it will be more rewarding in the end.

Van Sluijs: And you’ll find out things that those first people you talked to did not know, and that has definitely happened with us.

Green: Just because somebody tells you something, you shouldn’t take that as concrete fact. You should listen to it, but then you really need to do your own investigation and your own homework, because believe it or not people don’t talk to each other and you wind up discovering a lot of new things by constantly questioning.