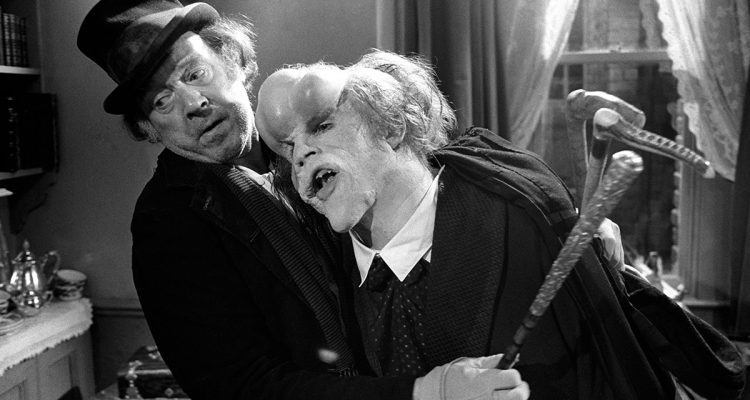 David Cronenberg was an unknown filmmaker with just two experimental features (Stereo and Crimes of the Future) under his belt when he wrote and directed Shivers (1975), a groundbreaking thriller that launched not only Cronenberg’s career but an entire Canadian horror film industry. Prior to Shivers (also known as They Came From Within, The Parasite Murders, and many other titles), Canadian horror movies were so rare that Cronenberg had to fly in an American makeup effects artist because he couldn’t find anyone in Canada who could do that kind of work; following Shivers’ commercial success, however, there was a boom in Canadian scare flicks (aided by the era’s favorable tax shelter laws) that included films like Prom Night, My Bloody Valentine, and The Changeling. These and most other Canadian horror films of their era focused on externally motivated threats – killers, ghosts, zombies, etc. – but Cronenberg’s innovation was to find the source of his horror within the human body. Shivers’ tale of slimy creatures that pass from person to person as a sort of extreme (and extremely disgusting) sexually transmitted disease establishes themes and visual motifs that Cronenberg would develop with increasing sophistication in many of his films to follow: Rabid, The Brood, Videodrome, and The Fly, among others. It also contains imagery that foreshadows some of the greatest horror films to come, particularly Alien and George A. Romero’s Dawn of the Dead. Although Cronenberg’s later movies are more polished, Shivers has the kind of relentless primal force that one often finds in the early works of great horror directors (Wes Craven’s Last House on the Left being another example) before they become polite members of filmmaking society. Shivers has been going in and out of print on video for years, but it’s now available as a terrific special edition Blu-ray from Lionsgate as part of their “Vestron Video” series of deluxe pressings of important cult films. There are multiple commentary tracks and interviews with Cronenberg and his collaborators, providing not only insights into the making of Shivers but a useful introduction to the history of the Canadian film industry in the 1970s.

Cronenberg’s studio benefactor on The Fly, Mel Brooks, was behind another excellent movie new to Blu-ray, David Lynch’s The Elephant Man (1980). Riding high on the commercial success of comedies like High Anxiety and Silent Movie, Brooks went through a period in the 1980s where he spent his Hollywood capital sponsoring daring works by other directors, with an unerring taste for matching maverick auteurs with mainstream subjects in a way that compromised neither the director nor the material. The Elephant Man and Lynch came to Brooks through Jonathan Sanger, an AD who had worked with Brooks and discovered the Elephant Man script when his kids’ babysitter asked him to read it (she was dating one of the writers). Sanger loved the script by Christopher De Vore and Eric Bergren and loved Lynch’s Eraserhead (Lynch’s only feature to date at the time), and was surprised when Brooks felt the same way and used his clout to get the picture financed with Sanger producing and Lynch directing. The result was a lyrical and unsettling classic, a true story that transcended the usual bio-pic cliches with a powerful sense of spiritual wonder and painful loneliness, anchored by a stellar John Hurt performance as poignant as it was unsentimental. Astonishingly given Lynch’s tendency toward experimental, abstract imagery, The Elephant Man was a box-office and critical success, tying Raging Bull for the most Oscar nominations of its year; Sanger and Brooks’ faith in Lynch’s ability to express universal emotions through his highly specific visual language was fully vindicated and rewarded. The new Criterion Blu-ray of The Elephant Man is yet another of the company’s indispensable special editions, with hours of interviews and documentaries that provide a thorough look at the film and its making; even better than the supplements is the exquisite transfer, which accurately reproduces cinematographer Freddie Francis’ widescreen black-and-white images in all their haunting beauty.

The Elephant Man marked Francis’ return to cinematography after a 19-year hiatus; he had spent the years since 1961’s Sons and Lovers directing Hammer horror films. The Elephant Man rejuvenated Francis’ career as a director of photography and set him off on a new phase of his career that would see him doing some of his finest work, including Glory, Scorsese’s Cape Fear and two more films for Lynch (Dune and The Straight Story). One of the real treasures among Francis’ later films is the 1988 drama Clara’s Heart, directed by old pro Robert Mulligan and newly available in a luminous Blu-ray edition from Warner Archive. Francis would collaborate with Mulligan again on the 1991 masterpiece The Man in the Moon, and like that film Clara’s Heart is a potentially mawkish melodrama saved by Mulligan’s restraint, precision, and commitment. The film, based on a novel by Joseph Olshan, focuses on the relationship between a young boy who has lost his baby sister (Neil Patrick Harris in his film debut, a year before Doogie Howser) and his family’s Jamaican maid (Whoopi Goldberg). The maid has suffered an almost unspeakable loss of her own, and Mulligan and screenwriter Mark Medoff (who brought a similarly delicate touch to both the play and film versions of Children of a Lesser God) delineate the growing bond between these damaged but strong characters with great subtlety and insight. There are all kinds of pitfalls inherent in the material, especially when the extreme nature of the maid’s secret comes to light, but Mulligan’s classical compositions and cutting patterns avoid imposing emotional effects on the viewer. He favors long takes and two-shots rather than manipulative close-ups and emphatic editing, and the low-key approach ends up having a far more affecting impact than more obvious aesthetic choices might have; we feel allowed into the characters’ lives rather than pushed around in them, and the freedom Mulligan gives the audience to choose who to identify with and when yields many lasting rewards.