Sundance Critic’s Notebook 2021 1 (Vadim Rizov): The Most Beautiful Boy in the World, Flee 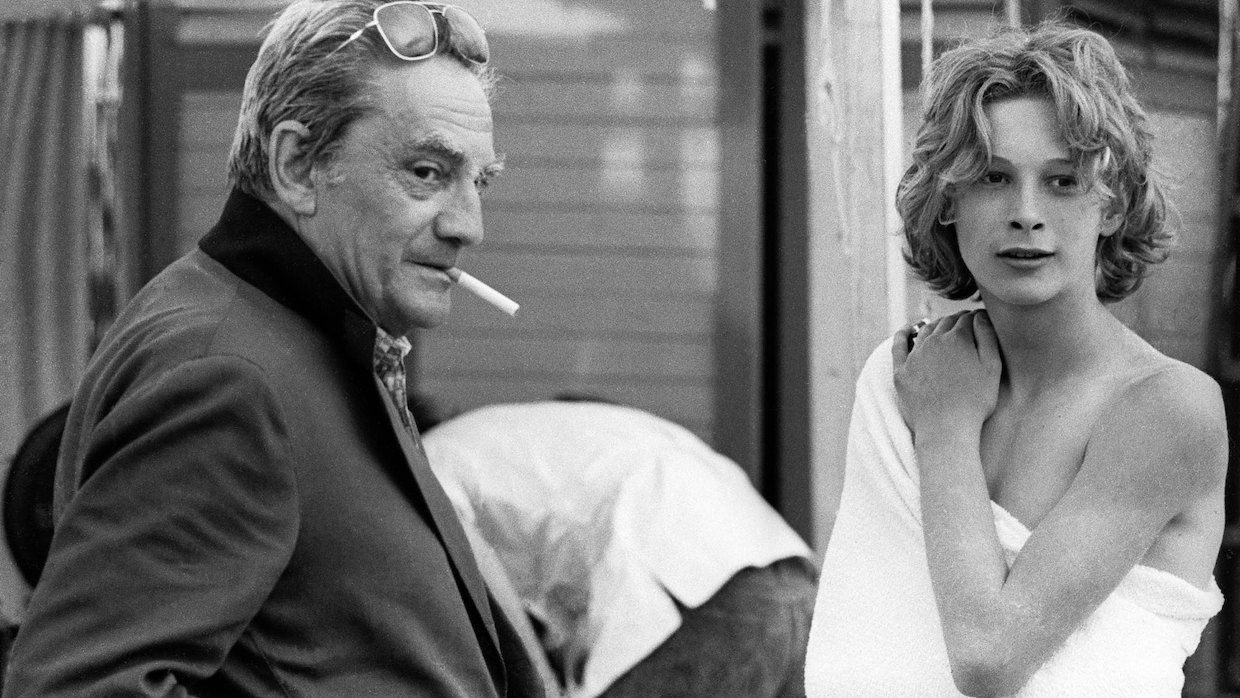 Luchino Visconti and Björn Andrésen, as shown in The Most Beautiful Boy in the World

“We’re sad to miss you on the Park City mountain this year and look forward to the day we can once again gather under one roof,” read HBO Docs’s email leading up to this year’s Sundance. “Until then, we encourage spending lots of time in front of your screen watching documentaries.” This is admirably direct and succinct, if bleak, and thus a fitting welcome to Sundance 2021; those who’ve physically attended in recent years can stroll down Virtual Main Street and experience brand overexposure all over again. You can “Bring [Chase] Sapphire on Main Home” or pop into the area held down by new sponsor White Claw, the official hard seltzer of Sundance. Per this press release and the beverage’s chief marketing officer John Shea, as “a brand rooted in culture and innovation, White Claw is excited to support Sundance Film Festival and the participating creators” with initiatives like a video called “Creating Mental Space to Evolve” (“Creators come in all forms. Come join The Salted Spirit Podcast host, Stacie Vanags, as she shares her experience building a community that champions wellness and mental health for water women” [her term for female surfers]). In a way I really do feel like I’m back in Park City for another round—but, fun as it is to dunk on brands, probably best to get on to the work itself.

2015’s documentary Helmut Burger, Actor embedded itself in Luchino Visconti’s frequent star/last lover’s filthy apartment. The prompt may have been ostensibly tied to high culture but the result was disreputably compelling, allowing Berger to rant at unedited late-night-drunk voicemail length and (sorry) climaxing with him masturbating to, as they say, completion at (?) director Andreas Horvath. John Waters got the camp-trash idea and named it the best film of 2015; Berger eventually filed a lawsuit. A companion piece in the sub-genre “Visconti Changed My Life and I Never Got Over It,” Kristina Lindstom and Kristian Petri’s far more respectable The Most Beautiful Boy in the World takes its title from the Cannes 1971 Death in Venice press conference, where the director gave that description to his Tadzio, Björn Andrésen. The opening draws heavily upon a TV documentary I didn’t know existed, 1970’s In Search of Tadzio (its director credit is assigned to Visconti, though that seems purely nominal based on its formal merits). This half-hour tracks Visconti on the hunt for perfect youthful beauty—which he unambiguously defines as belonging to the Greek/Nordic realm—in Munich, Stockholm, Helsinki, Budapest and Warsaw. Visconti’s welcomed into classrooms where he scans the aisles for pre-teen boys without a trace of abashment; it’s hard to imagine either his definition of “perfect beauty” or casting methods flying now. The footage is as fascinating as it is bone-chilling, culminating when Andrésen walks through the door; the director’s face lights up and he’s quickly asking Andrésen to strip, then starts getting photos taken of his entire body.*

It’s been 20ish years since the one time I saw Death in Venice, but apparently it left an even bigger mark than I realized—I remembered every single shot included here. (Most Beautiful Boy matches Death’s widescreen aspect ratio, smartly avoiding pillowboxing it into the frame; when I’m done with Sundance, Visconti’s film is the first thing I’m rewatching.) While Andrésen’s wiki covers everything in Boy’s first 40 minutes, I’d never read it (and would never have stumbled upon the TV doc without this film, so fair enough). Everything was new to me, as was Andrésen’s subsequent pop culture afterlife: the first “Western pop idol” to visit Japan, Beatlemania screams and all, as his then-novel look subsequently inspired a generation of manga artists. One, The Rose of Versailles artist Riyoko Ikeda, shows up to testify to his (extremely visible) influence on her work. Boy’s front half unpacks Andrésen’s most famous years but brings the archival goods—stills of Andrésen looking miserable on Japanese photo-shoots and on-set Death in Venice footage shot by Andrésen’s grandmother. It’s mostly unexceptional between-takes clowning around but still fascinating, and there’s a real coup at the end—one of the film’s most famous shots (although every single one seems increasingly iconic to me), Tadzio cartwheeling on the beach, match-cuts to a previously unseen angle from grandma’s vantage point.

There are, however, a number of other bad editorial ideas, mostly goofy juxtapositions too literal to qualify as metaphor. One of Andrésen’s Japanese admirers describes a moment in the teenage years when beauty briefly blossoms, and there’s a cut to cherry blossoms, which are both Japanese and ephemeral; Andrésen recalls falling into his own pit of depression and self-doubt, illustrated by his Midsommar cliffside plunge, et al. Opening shots of present-day Andrésen wearing a leather jacket while wandering deserted, dilapidated hallways in slow motion play like someone trying to imitate David Fincher making a Metallica video. But the present-day mode is otherwise largely naturalistic; after that intro, Andrésen, like Berger, is next seen in his filthy apartment—but actually cleans it up when his girlfriend tells him to (and after his landlord threatens to evict him). Like many of the documentaries on Sundance display, Most Beautiful Boy flattens admirable access into a rigidly ironed out storyline: Andrésen is introduced at a “relative low,” tells his story, revisits his past and more or less gets it together (his trajectory spelled out in the parallel storyline where he has a girlfriend, who briefly threatens to split with him, then they’re back together—romance as throughline). Ultimately, the film blames not Visconti (against whom the actor has aired his complaints many times before) but Andrésen’s evil showbiz grandmother: he just wanted to be a classical pianist, but instead was pushed to be a child star.

Most Beautiful Boy does eventually move beyond Wikipedia basics retold in the first-person to break some news as Andrésen, long haunted by his mother’s disappearance as a child and the subsequent discovery of her corpse in the woods, finally tracks down police records et al. from a Swedish office housing all relevant documents. Taking on the Werner Herzog in Grizzly Man role, the official who provides them warns he may not want to look—Andrésen does anyway. Much more so than Berger, Andrésen seems camera-ready, ready to play “himself” as a mournful man on a mission to get to the bottom of his childhood trauma; if Horvath’s film seemed to revel in its tabloid “realism” a little too much for my taste, this goes in a different but equally annoying direction, smoothing out a rocky lifetime into cleanly identifiable stress inflection points. This doesn’t make the leap from “DVD supplement” to its own film-object, but anyone curious for Visconti-related reasons will probably get something of value out of this.

20 years out from Waking Life and a decade after Waltz with Bashir, there’s no novelty in the idea of somber adult animation decidedly not in the Ralph Bakshi pocket. Jonas Poher Rasmussen’s Flee has several justifications for telling the story of pseudonymous Afghan refugee/Danish resident Amir Nawabi in animated form: it helps inconspicuously anonymize those that need protection, allows for shots to be created wholesale and also helps recreate lost worlds (Afghanistan in the ‘80s, early ‘90s Moscow) which would otherwise be the realm of talking heads + archival. The most compelling argument, however, is implicitly offered by Nawabi, whose story is indeed harrowing. Recalling a moment where his refugee vessel, lost at sea and stranded for two days, finally was spotted by a cruise ship, Nawabi remembers being unable to share in his fellow refugees’ excitement: being photographed and videotaped from deck by passengers who stared, then went down below-decks, filled him with shame. Nor did matters improve when Nawabi et al. were relocated to a filthy building in Estonia, where they were held for six months. Rasmussen draws upon archival footage shot by visiting journalists, but, says, Nawabi, “They got their footage of poor refugees” and went home. This, then, is an opportunity to tell his story, which is both very specific and emblematic of a broader experience often rendered in generic, insulting and exploitative poverty porn ways, on his own visual terms. (Given which it’s disappointing that executive producers Riz Ahmed and Nikolaj Coster-Waldau, doubtless with the best of intentions, will be providing their voices for a forthcoming English dub, which seems like a retrograde move—the linguistic specificity of this story is absolutely crucial and should be respected.)

Flee starts badly as Nawabi tells his childhood story—footage of corpses on the streets of Kabul would seem to self-evidently be traumatic, but composer Uno Helmersson makes sure to get it across with the help of a sorrowful violin solo backed by more strings. The animation is several styles, neither of which really did it for me: opening memories are rendered in charcoal black-and-white, while other portions resemble knockoff Miyazaki. (Animators Sun Creature Studio previously did an Oregon tourism campaign rendered in faux-Miyazaki style, so this makes sense.) But the meat of Flee is a very specific refugee story, which includes the family escaping to Russia, the only country that would give them a tourist visa, and then in classic immigrant style having nothing to do but sit and watch TV (Mexican telenovelas dubbed into Russian), thereby learning their temporary country’s language while waiting for something to happen. Estonia, Ukraine, Istanbul, Copenhagen: Nawabi’s path was long and torturous, and the story’s told without much gilding of the pathos lily. Blessed with either a budget big enough to license a-ha, Roxette and Daft Punk or some very generous clearances, Flee uses its resources judiciously—far worse films have received rapturous Sundance opening night raves.

*It’s parked in full on YouTube—no English subtitles, but you’ll probably get the idea.↩