“I’m Pretty Sure She Saw Something”: David Robert Mitchell on It Follows 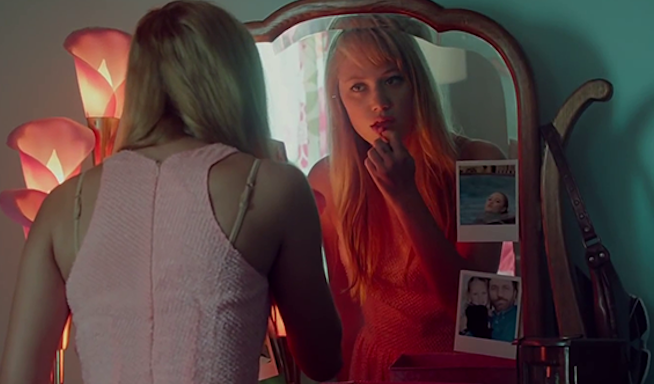 by Sarah Salovaara
in Directors, Interviews
on Mar 11, 2015

Lo-fi horror films have enjoyed a modern renaissance ever since The Blair Witch Project, and while the quality of the genre is often overcast by the sheer quantity of its offerings, the profit margins all but ensure Blumhouse and comrades’ staying power. As such, it’s nice to see an aesthetically exacting, relatively high-concept pallet cleanser take its turn in the spotlight. Last year, we had The Babadook, and this year, all signs point towards David Robert Mitchell’s absurdly entertaining, expertly crafted It Follows as the genre’s banner breakout.

Mitchell’s sophomore film has myriad virtues — a Carpenter-worthy score from Disasterpeace, and a foreboding use of wide pans, for starters — but it’s the outlandish premise of a sexually transmitted stalker, hot on the heels of his leading lady, Jay (Maika Monroe), that is likely to court It Follows more than a few pairs of eyeballs. Audiences will be pleasantly surprised, then, to discover that the film offers a deeper dive than its headline-grabbing synopsis might suggest. Filmmaker spoke to Mitchell about grounding his concept in reality, the film’s supernatural production design, magpie influences, objective camerawork, and more. It Follows opens Friday from Radius-TWC.

Filmmaker: I remember reading about the film when it first premiered at Cannes and how people were surprised you had followed up The Myth of the American Sleepover with a horror film, but re-watching Myth, I found it to be rather unsettling. Looking back to that time in my life and that unnerving, pervasive feeling of being on the brink of something, but you’re not quite sure what, is ultimately, in the grand scheme of things, so banal, which shakes you in and of itself. How did you end up, at least aesthetically, moving in this ‘different’ direction?

David Robert Mitchell: There’s certainly a sadness or melancholy to Myth. When it came out, I had people say to me that they were waiting for something bad to happen, and maybe that’s because of what typically happens in that genre, there’s often a tragedy, and Myth avoids it. For me, It Follows is not so much a leap, but I can understand why people would feel that way based on the one film they’ve seen from me. I like a really wide range of movies, from silent films to classic Hollywood movies to European arthouse to genre films, I just love movies in general. I’ve been a horror buff ever since I was a kid, in part because my dad really loves horror movies. I always wanted to make one. Not a horror film, but Rear Window is my favorite movie ever, but I also was obsessed with Truffaut when I was younger, so in terms of my tastes, it goes in several directions. There’s always an odd balance I’m striking in terms of what I care about, and I think that all of those influences probably come out in the things I want to make. Sometimes, it may be an odd mixture, even though I don’t really think so.

Filmmaker: When I saw It Follows for a second time, it reminded me of The Virgin Suicides in a strange way. It’s a loose generalization, but especially the scenes of all of them in Jay’s room, and the notion of a woman being — not persecuted in this instance, because it’s beyond anyone’s control — but punished for her sexuality.

Mitchell: Yeah, sure. I’ve heard some people say that, and I think Sophia Coppola is a really incredible filmmaker.

Filmmaker: On paper, the premise for this film is so crazy–

Filmmaker: It’s a very broad question, because I understand that these ideas will just come to you, but how did you go about devising it in a way that was going to feel convincing to you. Conceptually, it’s kind of supernatural, but it’s grounded in the human experience, because of the people that follow Jay — they’re very real.

Mitchell: They’re definitely within a physical space. What we see feels somewhat grounded in reality in that they’re not walking through walls. But ultimately, how do I make it not ridiculous? It’s funny, because when people asked me what I was working on, I would just say “Oh, a horror film.” I would avoid describing it, because I knew it would come off as silly, but in my head, it was always about the execution and the tone that I wanted to strike with it. I just felt like if we experienced this strange thing, and we were right there with them, that it would work. When you see the first girl that’s running from “it” in the opening of the movie, we see “it” outside of her point of view, we’re not privy to what she’s seeing, but we are connected with Jay and the character we see the film through. We’re initiated to the film with her. That was a tricky scene, and a lot of energy was put into that in terms of how “it”‘s introduced to Jay, and that careful balance of setting up the character’s ideas for the film, as it was being told to her and us. I could see it in my head, and it felt like it worked to me, to be direct about it. That’s probably the best answer I can give. As silly as it may have seemed, I could imagine that it would work.

Filmmaker: I wanted to talk about the cinematography. It’s so strong, but also in a way, it is what “follows.” Because the antagonists are so rarely seen, it has to channel their tone, it has to feel menacing, and it has to drive the tension. It sounds like you were somewhat strict about keeping it from that perspective, but can you speak a bit about how you were able to achieve the mood with your cinematographer?

Mitchell: Yeah, we definitely had a plan going into it. We worked out the most of the details far in advance, and the majority of the movie was storyboarded. A lot of the film has a colder, more objective point of view in terms of the camera, and at sometimes that feels as though it’s the subjective point of the “it,” but often times, it’s not. It’s playing with that as an idea. We tried to shoot the film so that you could really get a feel for the geography of the space. Most of the film is shot with wider angle lenses so you have a feel for what’s in the distance, what’s along the edges of the frame. There are close ups, but there are very few, to be honest. We’re basically placing the viewer in the environment — we’re rarely cheating distance — so you have a tendency to look out for the characters.

Filmmaker: Is the high school that’s featured in the film the same one you shot in for Myth?

Mitchell: No. It’s all similar areas, though, and we shot in the same neighborhoods in the suburbs and the city [Detroit].

Filmmaker: Even if it’s not exactly the same, it was interesting to see because it felt like you were re-contextualizing something familiar from your previous film into something horrific and other.

Mitchell: Totally. That was one of the ideas that I had when I was sitting down to write this. I had just recently finished Myth, and sort of imagined characters like those ones, a little bit older, in the same environment. I wanted to see how those characters would react to a nightmare.

Filmmaker: Detroit has become a sexy place to shoot for apocalyptic-esque narratives, but you definitely don’t overdo it. There’s the feeling of decay in the landscape, but it doesn’t ever seem like there’s an obvious parallel being made to the character’s psyche.

Mitchell: Yeah. It’s the area that I grew up in, I wrote it to take place there. One of many themes of the film is the separation that exists between the city and the suburbs, and what that feels like. It was important for me to film the movie there, and I really care about the area, so I would hope that we were not exploiting the poverty of the city. It’s a tricky balance. I hope that it doesn’t turn into a situation where people just use the city for its desolation.

Filmmaker: Yeah, well that’s what I was getting at. I think you can definitely tell the difference between a filmmaker who’s from the area, and someone who just plops in–

Filmmaker: You spoke a little bit about the production design in the Q&A I saw at Sundance, but I wanted to ask you more about it because it’s rather unusual. You have some anachronistic props, like Coke cans from the ’70s, and then something like a compact computer that’s completely futuristic. I understand those were used to lend it an additional nightmarish, supernatural quality, but I think it’s a good example of blending your interests as a filmmaker to create something totally different in the details.

Mitchell: Sure. Those were all used to place the film a little bit outside of time, like in a dream or a nightmare, but there are elements from several decades, from the ’50s to now to things that don’t actually exist. When you watch it, you start to pick up on these elements, and it’s a little disconcerting, and in the back of your mind, you’re searching for something to ground you and tell you where you’re at. We were trying to avoid all that. I worked really closely with the production designer, and he did a great job of mixing and matching all these pieces. It leans in the direction of the ’70s and ’80s, but it’s a nice mix.

Filmmaker: I wanted to ask about your decision to make the “it” amorphous. In doing so, I found that it was more frightening in anticipation than when you physically see it, because you never know what you’re going to get. Was that something you were always sure of? When Hugh passes it to Jay, he says “It could look like someone you love,” which is about as terrifying as an insinuation can get.

Filmmaker: I’m guessing the “it” was always portrayed by actors.

Mitchell: Yes, they were always on set.

Filmmaker: Because in the opening shot, there’s clearly no one there–

Mitchell: Well, that’s what it looks like to us. [Laughs.]

Filmmaker: Yes, exactly. I’m always curious about directing those scenes and if it’s difficult to portray the energy of something that is physically unseen by the audience.

Mitchell: It’s just an issue of the actors believing it, and seeing it. But I’m pretty sure she saw something, which made my job really easy. [Laughs.] No, that can definitely be trickier. That was a tricky sequence to shoot for a number of reasons. It was at dusk, it’s all in one shot, the actress is running around, and she is acting without something there, which is hard, but you figure it out.