Turning a Book into a Movie: An Author’s Perspective 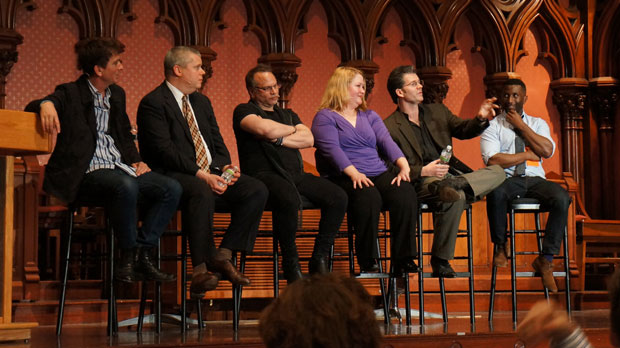 by Michael Murie
in Filmmaking, Screenwriting
on Nov 23, 2012

At a recent panel at the Boston Book Festival, five authors debated the pros and cons of having your book adapted to the big screen. Moderated by Boston Globe film critic Wesley Morris, the event featured Nick Flynn (Another Bullshit Night in Suck City/Being Flynn), Daniel Handler (A Series of Unfortunate Events), Buzz Bissinger (Friday Night Lights), Rachel Cohn (Nick & Norah’s Infinite Playlist), and Andre Dubus III (The House of Sand and Fog). The conversation ranged over a variety of topics and it was clear that there was a wide range of experiences, from the ‘Pollyanna’ experience of Rachel Cohn, to some rather dark and sober warnings from Buzz Bissinger. Cohn’s experience was perhaps the most positive. She summedit up as “quite friggin great. It’s like a two-hour advertisement for your book.” She added, “we loved the writer, we loved the director, we loved the producer, we loved the cast. It was really a charmed experience for us, it was very surreal.” The size of the movie clearly plays a big part in the pressures. Nick & Nora’s was a “small” movie. They also had the luck that Michael Cera expressed interest the weekend before Superbad opened, and on the following Monday he said yes. On Tuesday the movie was green lit.

Nick Flynn’s movie took seven years, though it stayed with mostly the same team during that process. It too had a “small” budget. “It wasn’t quite as ugly and quite as dirty,” he said. “There wasn’t as much at stake, and by the end the studio didn’t really care that much, they could just write it off.” All agreed that turning a book into a script is not easy, and that the important part is capturing the spirit of the book. “Even though the plot changed a lot as they turned it into a movie, they captured the essence of it beautifully,” said Cohen. When asked whether a good adaptation is a loyal adaptation or a transcription, Andre Dubus said, “I’m all for giving filmmakers their creative due. As long as you’re loyal to the spirit.”

Bissinger’s Friday Night Lights took 14 years to come to the screen. During that time several directors were attached to, and then left, the project. These directors had been signed on a “Pay or Play” basis, and would get paid when the movie was made, even if they didn’t make the movie. “At a certain point there was 11 million dollars against the movie,” said Bissinger.

Writing a screenplay is not like writing a book. “I don’t think authors should write the scripts of their books,” said Bissinger. “Let’s face it, the form of a book is different from the form of a film, is different from the form of a television series. I think the author writing the script is unable to make the kind of choices that you have to make.” Bissinger and Dubus talked about the problem of a book that doesn’t have a Hollywood – happy – ending. Dubus said he turned down many offers because he was worried that the Iranian family in his book would be painted in a two-dimensional way. “I was amazed that so many people from the film world were calling because House of Sand and Fog is a very dark novel and it ends darkly.” Finally he got a call from a Ukrainian who had never made a feature film:

“He’s one of the top directors of commercials in the world, and that was a strike against him for me, because I hate advertising…and I talked to him and we talked for about an hour and at the end of the conversation he said in his slight Kiev accent, ‘You know some movie person is going to give you a lot of money for your book, but they are going to take your baby, they are going to chain it to a radiator and they are going to rape and kill it.’ I said, ‘What are you going to do?’ He said, ‘I’m not going to hurt your baby. You wrote a dark book, I’m going to make a dark movie. It’s only going to be seen in art houses and nobody is going to see it.’ I said, ‘You’re my man.’”

The movie Friday Night Lights was delayed for several years because the producer wanted to find the right director. “We waited and waited and he did get the right director,” said Bissinger. “And when I watch it I get goose bumps. Were there differences? There were tremendous differences. Do they bother me? No. […] it was faithful to the spirit of the book, which is all I cared about.” Having the project pass through multiple directors and writers adds other problems as Bissinger pointed out; “With each director, with each screenwriter, they want to put their own stamp on it. And it gets further and further away from what the book is.” Flynn said that the first draft of the movie – written by another writer – was beautiful and something he couldn’t have done. But then it got rewritten 30 times and “by the end it was basically unreadable.” Robert De Niro had liked the book and was interested in doing it, but read the latest script and said it “sucked.” Flynn told him there was a better script and De Niro read that and signed on.

Daniel Handler was clearly conflicted about his own experience. On the one hand, as he said, the movie was a huge advertisement for the book, and one of the challenges of writing for young readers is getting them to open a book. At the same time, while he wrote nine drafts, he was ultimately fired, and he didn’t believe the final script was as good as his first draft. He proudly said that his original script was actually used to attract other actors to the movie. He said that the finished film was “a Jim Carrey movie,” but even at that Handler wasn’t especially bitter. He noted that finding child actors who could give a creditable performance was very difficult. Ultimately, though, it’s about money. “Movies cost a lot of money and people are nervous about a lot of money,” said Handler. “If they said you’re the guy that’s writing a check for almost 200 million dollars, is this the script – ‘I don’t know!’” He added, “If writers were in charge of films, the scripts would be better but the movies probably would be worse.”

Having your book turned into a movie can be a big boost to your ego, but it can also be a blow. Handler described the worst time as shortly after the movie comes out; a period when a narcissistic writer can “feel like everybody is thinking about your thing and they’re not thinking about it the way you want them to.” He said this is often the time when the most awkward quotes from writers appear. But, he said, “that period will end and fade away.” While Bissinger had problems with the movie adaptation of his book, he had greater problems with the TV show that came later, and was much further from the book. “I never watched it,” he said, adding that “what happens today is people think that I wrote the TV series and they say, ‘I loved the TV series,’ and I say, ‘I actually wrote a book,’ and they say, ‘What book?’ ” At one point Bissinger said dismissively, “They love saying ‘based on a true story.’ What they really should say is ‘based on a story that once upon a time may have been true.'”

Towards the end of the evening it appeared that Bissinger felt like the panel hadn’t been contentious enough, and he was as eager to disparage current writers as he was moviemakers. “I think most non-fiction writers write for the movies. Their books are treatments. Don’t tell me the Social Network was a book,” he said. “This is what writers are doing and in the name of non-fiction, they’ll make it up, they’ll switch scenes around, they’ll make up dialogue. Publishers will go along with it because they don’t care about fact checking, so what you’re getting too much of is surface.” Dubus only partly agreed with him, saying that some non-fiction books are like that, but not all. He did think there were other issues with young writers. “I think that too many young writers today are being inspired to write stories because they have watched a lot of films, they have not read a lot of books.”

So why would you put yourself through this? Apart from the money, Handler summed it up this way: “No one says ‘I read your book, I can’t wait until 12 poets are inspired to write songs about it.’ ” Telling an author that their book would make a great movie remains “the cultural currency for a lot of people.” “I guess I’m a whore,” said Bissinger, “but I’m kind of pragmatic about it. We want the money, and we deserve the money, and we do also hope that it has some reflection of the book that we wrote. And I felt that the movie did.” At one point Dubus said that he was in the film world “with deep ambivalence,” but latter added, “it does bring new readers to your book. For me it falls under ‘all good.'”