B-Side: How a Bunch of First-Timers Made a SAG Ultra-Low Feature Without Blowing Up the Garage 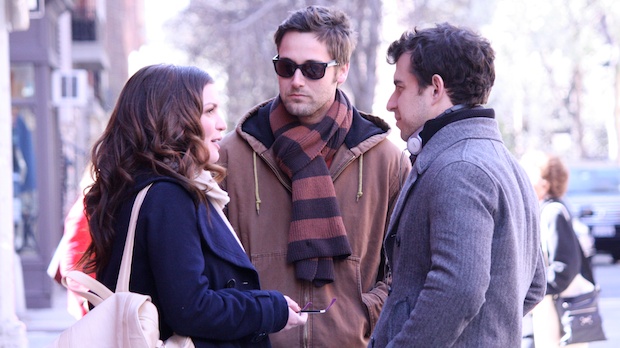 Nine years ago, I walked into Sound One on my first run at my first internship. This summer, I walked out of Sound One having completed post-production on my first feature, B-Side, less than six months after we began pre-production. It wasn’t just a feature debut for me as a director, but also for our producer, DP, editor, 1st AD, and leading lady.

Now rest assured, I could tell you dozens of things we would do differently. Free sample: Don’t shoot anything that will go in a movie’s first five minutes on the first day of shooting. And we have no idea what the future holds for our little romantic comedy (To any festival programmers or distributors reading this: Have I mentioned you’re looking fantastic these days?).

But since finishing a movie this size without going over-budget, going over-schedule, or killing anyone is a small miracle, I thought it could be instructive to share what we ultimately did right. Other than getting lucky, of course:

We decided to just do it. Sure, it’s a cliché, and obviously, it’s not quite that simple. But the day we decided to strip down our budget and set a firm start date was when the movie became real. If you wait for your ideal budget or cast, you might never get it. If you just start a project rolling, all sorts of help can emerge. Lots of crew and facilities try hard to accommodate smaller projects. And you know what movies agents want to put their actors in? Movies that are going to happen with or without them—and soon.

We had a producer who could propel the whole movie. On small movies, the producer has the hardest job. April Lamb had to perform dozens of different jobs, without money or real leverage on her side. She worked with our executive producer Doug Matejka to strike post-production deals and create our budget. She worked with our line producer Nikkia Moulterie — who was also willing to work insane hours — to manage that budget. She negotiated down our insurance costs. She sat in on most of our casting sessions, including being the first to rally for Tobias Segal, who was a revelation in our supporting cast. She hired most of our principal crew and sat in on most meetings with our art and costume departments.

She also worked hard to troubleshoot and manage the psyche of an antsy first-time director. This included gently pointing out after day one that I was directing one of our actors wrong, and setting me up for an instructive chat with Charlotte Barrett and Sean Fallon, who had recently finished a similar-sized feature in Virgin Alexander. She also did all of this while living in the living room of my one bedroom apartment, which was also our production office. SAG Ultra Low is no country for weak producers.

We planned to not fix anything in post. Anyone who says “Fix it in post” during production should have to donate a dollar to the crew beer fund. If you don’t plan to fix anything in post, you’ll still have lots to fix. Don’t invite more. Think of our situation: We got to use world-class post-production facilities and personnel at Sound One and 1619 Broadway, but had precious few days for our color correction and sound mix. With so little time, we wanted to be able to focus on polishing the movie, not fixing it on a large scale. Part of what allowed us to do this was…

We took sound seriously in production. And pre-production. It’s easy to focus on cutting corners, because you need to do it so much (see: my living room). But drawing a line on where you do need to spend is important. Spending a little more on a good sound mixer can make a huge difference in both quality and expense later on. We hired Dennis Haggerty, but more importantly, we listened to him. Don’t forget to invite your sound mixer to the tech scout. On ours, he suggested we replace a major bar location. And at a particularly noisy location, I trusted him about when we needed further takes. This slowed us down, but we didn’t need to ADR a single line of dialogue, which saved us thousands, and it gave us a great starting point in post.

We got professional help with casting. Similarly, we knew we needed major help with casting. Casting a low-budget movie is hard—doing it in New York during pilot season is a nightmare. Sig de Miguel and Steve Vincent had ideas, perspective, and sense of strategy that we couldn’t. As a screen acting novice but Broadway star, Jennifer Damiano never would have been on our radar. But she had the talent, star quality, and fit for the role that made her perfect for our female lead. And Sig not only had the idea to reach out to L.A. to bring in Ryan Eggold for our male lead, but also gave us the credibility to actually get an actor of his ilk to cross the country for such a small movie. I know plenty of people who’ve cast small features without casting directors; in our case, it made a world of difference. Sig and Steve also shared a key value with us:

We didn’t hire résumés. We hired the people that fit. A first-time director working with a first-time DP and first-time editor should be a nightmare. But in Eric Laplante, we knew we had a DP who could have strong opinions without steamrolling me. After making shorts with him, we knew he could work fast, and knew he could do beautiful work with next to no money or manpower. This meant our most difficult working conditions were right in his comfort zone, while times when he had more G&E crew or time at his disposal felt almost luxurious. A DP with a splashy high-budget reel is awesome, but can they work at your level? Sophie Corra came recommended to us based on her work as assistant editor on Damsels in Distress. Damsels was a perfect training ground for editing our talky, whimsical dramedy, and right away, we saw that her appetite for the material and attitude would be a great fit. This was a running theme for us. Skills are obviously important, but part of what let us get away with a very young crew was:

We paid attention to personalities. Personality matters. A lot. Several crew people were worried about our 1st assistant director, Theo Cusick, before the shoot because he’s so soft-spoken for an AD. But he was the right fit for all the low-key personalities we had on set and he kept things running on time at least as well as any shouter would have. You could fill the Grand Canyon with what I don’t know about the nuts and bolts of costume, hair, makeup, and production design, but we had department heads that were not only skilled, but also patient communicators that helped me find what I meant, with tons of hard work and very little ego. That kind of flexibility is extremely important. In casting, I prioritized actors who could make adjustments — even weird ones — very quickly. That left us with the right people when we, for example, needed to steal a location in one take. And all of that applies to us, too. We weren’t paying people enough to be tyrants or deprive them of a chance to really collaborate on a significant level. Because of our limitations, we pretty much only got people who really wanted to be there. Because we worked to communicate both our vision and constraints, they were all there to make the same movie. And because of their personalities, they functioned extremely well as a cohesive group.

We embraced our limitations. Many times we found out that there was a positive flipside to our most difficult limitations. We were all set to shoot our female protagonist’s first scene, in which she meets a journalist played by Will Janowitz in a hotel lobby. The day of the shoot, we found out we could only use the lobby space for 15 minutes – not nearly enough time to light anything; an unvitation, in Seinfeld terms. It had been frustrating that my writing partner Joe Uchill couldn’t be in New York for the shoot. But trying to find a rewrite solution, it was extremely helpful that he had a cooler head than us by not being on location. We rewrote the scene as a phone call from the lobby to a hotel room location we had waiting anyway. Because Will is so quick on his feet and Eric can shoot so fast with just a window and a bounce board, we managed to rattle off three shots in 14 minutes. And the scene is better than the one we planned.

We’ll always look at B-Side and see rookie mistakes or missed opportunities. But because of a few key values in building the movie, and plenty of luck, we managed to run off the edge of the cliff like Wile E. Coyote and land with a movie intact.