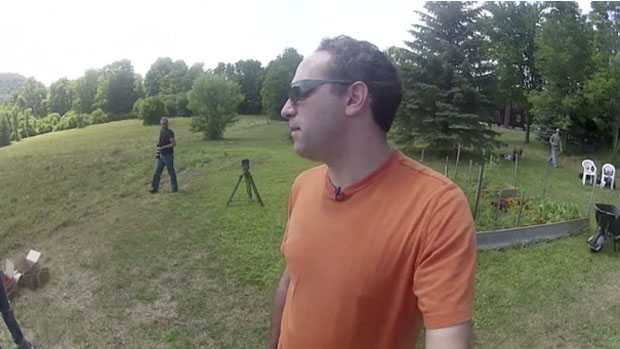 by Mike Feurstein
in Columns, Distribution, Filmmaking
on Nov 19, 2012

Attention spans are not what they used to be. Everything I learned in film school failed to include tips on the pitfalls of the digital age of storytelling — because there wasn’t much of one back in 2000.

I currently write a lot for youth audiences, and also web series. With web series, it’s basically trying to sum up an entire scene in one page. Or the entire episode in five pages. Trying to bend a whole story arc, pieces of the series arc, plus character motivations, subplots and gods forbid a beat or two — all in a handful of pages.

The attention span of the average YouTuber is said to be 5 seconds. After which you have approximately 10 more seconds to keep the attention you’ve just grabbed. What follows is a series of incrementally larger chunks of time. Stepping stones toward winning over your audience of one. Scripts ideally follow this structure, and production plus editing adheres to complete a work that hooks in 5, sustains in 10 and continues its hold on the viewer til the end.

We could say “Damn The Internet!” for causing such a shortage of audience attentions or for inducing uber-brevity in storytelling. But I wonder, has this format of delivering our messages really bled over into other mediums? Has it ruined it for the rest of us?

I’ll employ some intentional staccato sentence structure in this article. Mostly. And I’ll throw in those single word sentences to speed it along. Irregularly. So am I kowtowing to your suspected short attention span which has been stunted by the 140 characters-or-less Twitterdom in which you reside?

Or is the digital age of storytelling just another medium with its own set of rules, like so many before, and it can exist separately without damaging other artist abilities to explore lengthier pieces?

So now we have Shakespearean bloggers and Twitterers @Ripocje. So what?

The web medium, one that demands attention spans shorter than most goldfish, will not destroy chances to tell stories that don’t adhere to YouTube parameters. But it has given us hopefully something to think about in terms of crafting our stories to their cores no matter what the length or method of delivery. The new rules are the old rules, just more intense:

A successful YouTube video is kept short, oftentimes funny, maybe riffs on pop culture, shows some boobs if possible, updates frequently and stays genre specific. All this means is what novelists and screenwriters and playwrights have known their entire careers: appropriate length, appropriate mood, relevance, stimulation or shock value, staying current, and knowing your audience. It’s just applied to a different mode of delivery: the digital short attention span.

These rules can change as web content evolves. More and more people view sitcoms streaming on network websites or catch news clips on local affiliate sites. These same people also enjoy the occasional lengthy documentaries, or reading their weight in books per year. What the Internet’s abbreviated form of storytelling has done is caused me to look at my own work with a new editorial eye. And this is fine, until it hinders my ability to let the story breathe.

Writing for youth audiences, I thought I would need to employ the same methods as YouTube demands. But what was strange was many of the youth demographic between ages 10-15 were demanding longer episodes. What happened to short attention spans? Well, it found an audience. My shorter pieces had hooked the intended audience such that it became less about “How long is it?” or “Does something cool happen every ten seconds?” and more “I want to know about these characters” and “How does it end?”

There is some measure of success in finding an audience that demands more of what you’ve delivered. Success is different for everyone. For me, in youth audiences it’s about entertaining and sustaining. Many of my products are educational. So to throw that angle on it, and still maintain an interested audience, is my success. We shouldn’t let YouTube storytelling dictate and run us into a suffocating condensed mess of the larger story we wanted to share because there will always be an audience. But we should know beforehand how we’re going to deliver our message, which medium we’re going to use, and does it hold up to the standard of that medium?

“Shooting with John” is a new column and web-series by the folks who brought you “The Microbudget Conversation.” Please feel free to contact us with ideas, suggestions, and possible guests:
john@fifthcolumnfeatures.com