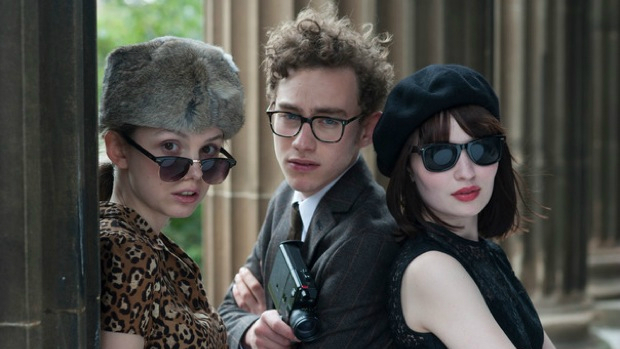 by Vadim Rizov
in Directors, Interviews
on Sep 4, 2014

There’s a certain rhetoric about the “perfect pop song” that feels like it peaked 25ish years ago somewhere on a bus in the UK, where earnest young people bonded over shared cultdom to pass the time, the guiding sensibility that (random example) led Orange Juice frontman Edwyn Collins to approach future bandmate Steve Daly because of a Buddy Holly button he was wearing — a sign they had more to talk about than initially evident. This kind of living through music is the force powering Belle and Sebastian leader Stuart Murdoch’s directorial debut God Help The Girl, an indie pop musical unleashed on a musical landscape that’s now got its head in a different place.

The Belle and Sebastian discography will prepare fans for what to expect: a smattering of Catholicism, casual wit from and about the literate repressed, more libido than you’d initially expect. This is a film for those who love jokes about dressing like Roddy Frame in 1981 or people arguing about what to call their band. It’s not exactly C86: The Musical and those who don’t have the reference points won’t be lost, but it’s definitely catnip for a certain kind of music obsessive. “Many men and women have lived empty, wasted lives in attics trying to write classic pop songs,” argues James (Olly Alexander), a frustrated Englishman living in Glasgow who claims to know more about the city than 60% of its residents, a textbook music-oriented dweeb first seen fronting a band whose drummer promptly attacks him (“You’re a bloody tea drinker, pal. You shouldn’t be in a band”). At the show, he meets displaced Aussie/aspirant songwriter Eve (Emily Browning). She makes a tape of her songs and hands it off to a radio show — a Maxell 90 captured in loving close-up, an example of God Help the Girl‘s lovingly retro sensibility.

Eve and James have nothing in common besides their musical taste — that quasi-omnivorously defined “pop” sensibility, shared by Cass (Hannah Murray), the last missing piece of their would-be band. The trio’s easy cameraderie is one of the best parts of God Help the Girl, an ambitious musical whose songs have changed and improved a great deal from the 2011 album Murdoch put out as a blueprint. Tunes can emerge from band practice or just to articulate emotion and thoughts: the possibilites aren’t limited. Eve has an Anna Karina look, and everyone generally looks perfectly dressed, in exactly the kind of way you’d expect from a Murdoch movie.

The worst of the film is its central romantic arc: sensitive boy loves difficult girl and is spurned. Even this is handled delicately and with psychological credibility rather than unthinking resentment and entitlement. (Eve does have legitimate problems: she’s a recovering anorexic. Girl passes the Bechdel test, for what it’s worth.) The musical numbers are a joy, especially the joyous everyone-on-the-dancefloor “I’ll Have To Dance with Cassie”: everyone’s twirling, following the lyrical command to “shuffle to the left” without losing their spontaneity. As Murdoch says below, the frequently livewire feel isn’t an illusion: the movie’s casual goodwill is improvisational in the best sense. It’s a movie about the blithe optimism of young people who are sure that music will shape their entire lives, and it’s very lovable.

Filmmaker: Belle and Sebastian songs have been used in a lot of films, but often in such a way that I assume you just signed off on the licensing and let them be used however. Did you think any of those songs were used particularly well?

Murdoch: No, and that’s partly the reason where I thought I could do better. That shows hubris and it may be impudent, but we all dream — if you’re a musician and you love movies, you dream of a Graduate moment. Even more recently, The Shins in Garden State, you may not like that movie, but the way that they use that song — there’s some great art, the way that Wes Anderson uses music, the way that Tarantino uses music, those guys, and the Coens, those are the best. You dream of those guys taking your song, making a great movie music moment, but it’s never really happened to our band. The closest was in High Fidelity, and actually the character, Jack Black, comes in and he kind of rips the song [“Seymour Stein”] to shreds, but it’s still the best use of our music, and it still puts it in the spotlight, you know? So yeah, you kind of feel like you could do better, and I was trying.

Filmmaker: The songs have changed a lot since the album.

Murdoch: Obviously the cast had to sing the songs. I recorded the album first because I wanted the blueprint in place for all the music, but we played fast and loose and actually recorded some of the songs live while we recorded. I thought that would add an extra element of jeapardy, but also it would bring the cast right into character, because they would have to sing live in front of people.

Filmmaker: I’m sure people cautioned you against singing live on set?

Murdoch: People cautioned me on pretty much everything every step of the way, but that’s life, isn’t it?

Filmmaker: I imagine shooting on 16mm made the production more expensive and difficult.

Murdoch: Funny you should say that. It made it slightly more expensive. At one point, I had four of the producers standing in a small room, trying to make me tell them why it had to be on 16mm. But it’s cheaper than 35, obviously. To me, it had to be on film, because I had an inkling of the technical side of the digital, and I knew that I would have to be much more expert to get what I wanted with digital, and it was beyond me. I knew that film was forgiving, friendly, dreamlike; there’s three things straightaway. That’s what I needed, so I had to rely on film. So I fought them and I got my way.

Filmmaker: Tell me about filming the “I’ll Have To Dance with Cassie” number. It’s very tricky: there seems to be choreography and also some improvisation, and it seems like you had to shoot it all with multiple cameras not to break the flow.

Murdoch: There was only one camera. We had to shoot fast, fast, fast. We didn’t have any time — fast and loose, that was the thing. I had help, thank God, with the choreography, I had a nice lady called EJ [Emily-Jane Boyle], but that was almost like a collaboration between us two, because she would set out the formal moves, and we’d take all that stuff and then maybe I would suggest little things, and then a lot of the stuff is improvised as well. To be honest, we lost a week of shooting quite close to the movie, so the schedule was so crazy that it was pretty much rock ‘n roll filmmaking, shooting from the hip, and we just hoped that it would hold together in the edit.

Filmmaker: Who are the DJs who act as a kind of Greek chorus? They’re really funny.

Murdoch: They are very famous in Britain, Mark Radcliffe and Stuart Maconie. I’d say very famous in some quarters anyway. Mark Radcliffe was the first person who ever played a Belle and Sebastian record on national radio; that was one of the key moments of my life back in 1996. So he’s always been a great guy. They have this double act where they just talk and talk. We had the idea for that, but we didn’t put it in ’til afterwards, when the film was shot. We recorded those guys. I would throw a topic at them and they’d just keep wrapping.

We actually ended up using more than we thought we would use. We were just having fun by this point. The film was shot, the edit was mostly done. I’m putting some of that stuff in for my own amusement, but it’s forming a world. It’s slightly indulgent, it’s kind of honest, and hopefully people will appreciate the honesty. There are two worlds side by side there: there are real life references but you have these fictional characters, but they almost inhabit the same world.

Filmmaker: The pop frame of reference seems rooted in a different time.

Murdoch: I share traits with Eve and James from a long time ago, and I knew a lot of characters in the late ‘80s and ‘90s. That’s where a lot of that kind of stuff went down. But the characters do feel real to me, and it was easy to set it in the current situation, as well.

Filmmaker: How did you conceive the characters’ nationalities and how did that change their dialogue and dynamics?

Murdoch: Initially, Eve was going to be Scottish. I always imagined that she came from a small town in Scotland to the big city, and then James was very Scottish, and Cass was going to be either English or American. Of course, all that changed because you’ve got to cast the people and they were all from different places. So we had to renegotiate some of the script, we had to do that kind of improv and feather that in. But it worked out OK, I think. Olly’s so great, he takes everything and makes it funny and believable, so the fact that he would be a bigot for Glasgow and Scotland worked out even better in my eyes. The thing that Hannah was great at, when they did that improv stuff, she always led the way. She was asking questions and she was really acting like me, she got the others going.

Filmmaker: Did the confrontation with the drummer come from your background?

Murdoch: I’m dramatizing slightly, but let’s just say that there was a kind of paranoia that grew in my early days about trying to get a group together. It was very difficult for me, I went through musicians like some people go through water. It got to a point where I’d ask anybody who was vaguely hip-looking if they could play anything.

Filmmaker: Were you aware that Hannah had played another Cassie on Skins, one battling an eating disorder no less?

Murdoch: I knew when I cast her that she was in Skins and played another Cassie, and obviously it’s a bit of a coincidence. I’d never seen Skins, and I wasn’t aware that she’s called Cassie, but there you go.

Filmmaker: Are you a “quality TV” person? I hear from a lot of filmmakers now that they don’t watch new movies, just TV.

Murdoch: I just watch Seinfeld. It’s my comfort zone. I like The West Wing. I’m so out of date.

Murdoch: I would love to be able to tell a great story. That’s not my strength. I don’t think I’ll ever be able to do that. When I’m relaxing, I’ll watch a war movie or a biopic or documentaries, some of the great, gripping real stories. Not so much music documentaries. I love documentaries about filmmakers, that’s a giveaway. There’s a couple of them that I would watch just relentlessly, about New Hollywood and stuff like that. There’s one called Easy Riders, Raging Bulls, based on the Peter Biskind book, which was slightly a breeze and I’m sure is a bit derisory and stuff, but it was fascinating.

Filmmaker: Did you mix the songs differently for theaters than you would for an album?

Murdoch: We tried not to go crazy with the theater space, especially with the music. I don’t really like the idea that the double-bass comes from behind me and stuff like that. We wanted to have a real good stereo sound, to have an impact like a record, so we kind of stuck to that. Hopefully that’ll serve the DVD as well.