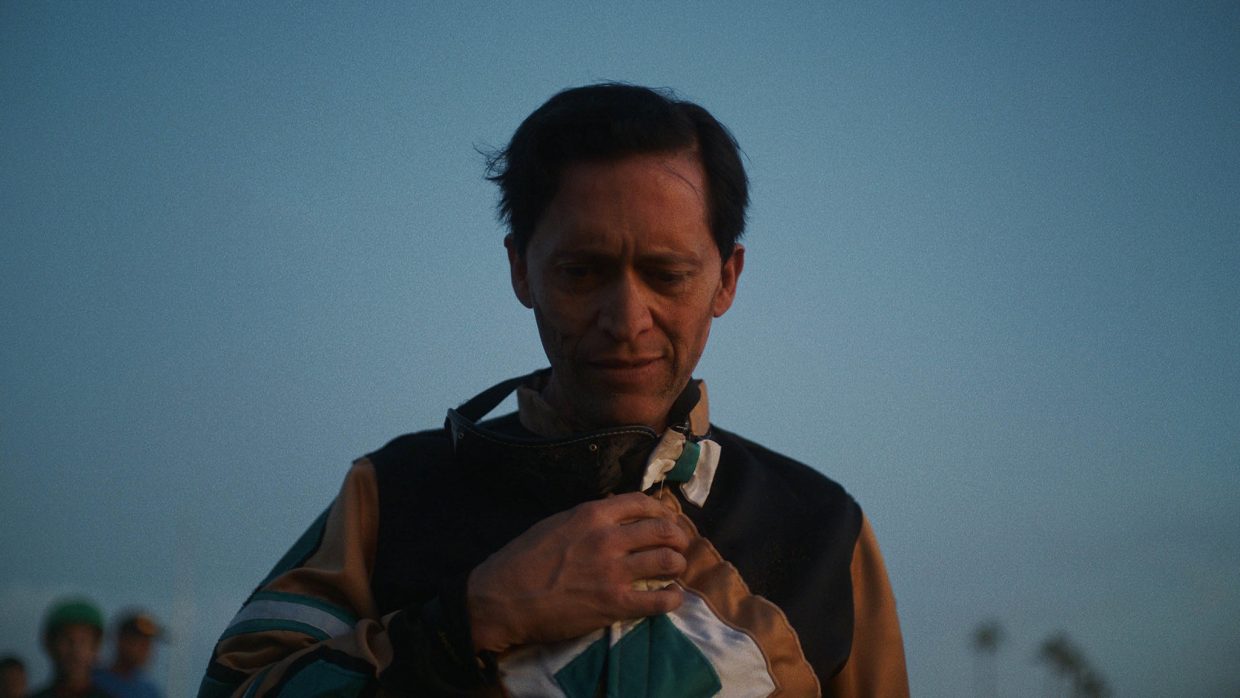 After so much meta-ness, it was practically relaxing to settle back in the waning hours of this year’s Sundance with a drama as solid and old-fashioned as Jockey. Not unlike The Wrestler, absent the self-consciously Dardenne-ian camerawork, this Southwestern slice-of-life follows an aging athlete – the titular jockey Jackson (Clinton Collins Jr.) – as he confronts the end of his long ride. On the racetrack, at least, although the aggregated damage caused by a series of back injuries now threatens to cripple him, or worse, if he keeps at it.

Director and co-writer Clint Bentley, who previously co-wrote and produced the border patrol thriller Transpecos (2016), goes long on atmosphere and landscape. The former is derived mostly from the endless blue skies and dusky sunsets that stretch above the Phoenix track where Jackson presides, loyally teamed with Ruth (Molly Parker), the trainer with whom he has worked for years. The latter is very much Collins himself, or rather the weathered face of his character, who struggles to maintain a stoic facade as his body crumbles. There’s more than the usual reasons to persevere despite the risks. It’s the creature Jackson calls “a swan with teeth,” a new mare that Ruth is determined to transform into a champion. If he’s got to go out, Jackson’s going to go out on a rocketship. There’s also the arrival of another game changing new factor, a young jockey named Gabriel (Moisés Arias) who idolizes Jackson, and one day stuns the older man by telling him that he is his son. This doesn’t go well, but Jackson slowly warms to the idea and soon takes the boy under hand.

The narrative twists are familiar ones, but so much of the pleasure the film offers comes from watching the lead actors embody their roles with an easeful naturalism, establishing a vibe that extends to the supporting cast, many of whom are real-life jockeys and racing industry professionals. The narrative’s classicism is modernized, edged up a bit, by the film’s engagement with the actual world it represents, not dissimilar to Chloe Zhao’s approach in Nomadland or, to stay with the equestrian theme, The Rider, which dispensed with professional actors. Bentley takes care to show some of the actual working process on screen, the day-to-day experience from daybreak in the stalls to the late-night tequila parties around a campfire. The subtle, pulsing score from Bryce and Aaron Dessner (of the National) adds subtle color and moments of dramatic flourish, an even handed approach that suits the story’s tone, rich in feeling and vulnerability, but like the jockeys themselves avoidant of excess baggage. The film’s emotional wallop is sufficient without melodrama.

To revise the classic line from Wim Wenders’ The American Friend, There are no cowboys (or jockeys) in the Hamburg of German director Ronny Trocker’s Human Factors. There is, instead, a family on the verge of fracturing. That division is mirrored in the film’s structure: a four-part narrative in which an event and its aftermath are seen from the perspectives of four different characters. The incident in question is an apparent break-in that happens after the family has arrived at a vacation house near the Belgian shore. Nina (Sabine Timoteo) and Mark (Mark Waschke) run a successful ad agency, and have two children, an adolescent daughter and a younger boy, who also dotes on a pet rat named Zorro (the rodent may seem like a cute detail but is in fact pivotal, however to say more would constitute a spoiler). Half the fun is anticipating how each reframing of the episode will play out, revealing new details each time and extending the story’s dimension. The other half is savoring the meltdown, as the tidy facade of comfortable, liberal northern European lifestyles is poked, tweaked and stressed to the breaking point. Besides the predatory camera that lurks at the beach house, there’s the intimation that the family may be the target of politically motivated retribution, as Mark, without consulting Nina, has taken on as a client a high-profile candidate running on an anti-immigrant platform. Trocker expertly locates pockets of vague dread and anxious unravelment in almost every social encounter, although with a much lighter, even satirical hand than, say, Michael Haneke, whose influence certainly hovers over the scenario.

The timing could not be more relevant to drop President on American audiences. Danish documentarian Camilla Nielsson’s follow-up to her exceptional 2014 film Democrats, revisits the chaotic landscape of Zimbabwe, and its fractious, effed-up and sometimes fatal 2018 presidential election. This one really should come with a trigger warning for anyone still reeling with PTSD from November, and Donald Trump’s subsequent campaign to overthrow American democracy. As his second impeachment trial looms, ready to dredge the gutters, Nielsson’s film will rattle emotions anew with its vigorous and detailed chronicle of a stolen election – a violent and maddening parallel to what could have happened here, and nearly did.

This epic of systemic corruption has its hero in Nelson Chamisa, the 40-year-old firebrand who takes charge of the opposition party MDC after its leader dies in mid-campaign. The ruling party and Zimbabwe president Emmerson Mnangagwa, who staged the coup against dictator Robert Mugabe in 2017, prove formidable foes, not least for their willingness to recalculate ballot results to their own ends. Throughout, Nielsson and her team go full-tilt into the intense fray, from tense backroom meetings to comical courtroom hearings to blood-filled streets, using their extraordinary access to deliver a crackling, vital account of history in the making – and unmaking.