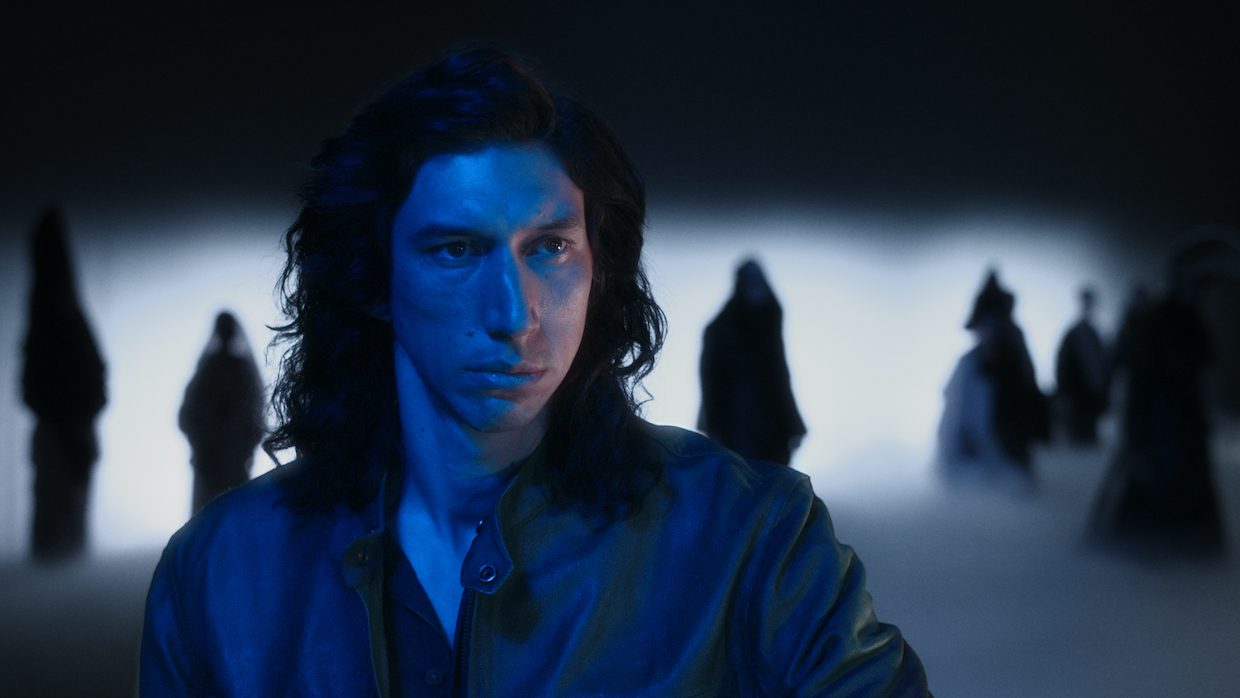 Leos Carax’s Annette begins with a variant on Holy Motors’s “Entrac’te,” now split from one mid-film break into opening and (mid-end-credits) closing musical numbers that set a similarly grimly determined/celebratory tone. The director and his real-life daughter are among the first people seen, leading Sparks and the film’s main cast out of the recording studio and into the world. Adam Driver gets on a motorcycle and zooms into the night to begin his diagetic story proper as confrontational stand-up comic and antihero Henry McHenry, his castmates calling “good luck” after him. A slow-motion love triangle revolves McHenry and the Conductor (Simon Helberg) around opera singer Ann Defrausnax (Marion Cotillard), sending the comic down the road of inevitable tragedy Carax’s films trend towards. The tone throughout is identifiably his, a mixture of grandly scaled self-loathing fighting for supremacy with self-aggrandizement, with secondary shadings of lust and Jean Vigo. That all-in stylistic and thematic volatility is an odd fit for Sparks, whose POV deliberately precludes first-person identification with singer Russell Mael—his aggressive falsetto and brother Ron’s lyrics keep sentimentality at bay. The main character may be a comic, but nothing about Annette is particularly funny, raising the intriguing, possibly ill-advised possibility of “what if Sparks but not at all humorous.”

McHenry’s name is presumably a hat-tip to the anthropologist of the same name, who specializes in researching how and why hominids went bipedal. Much as with Motors‘s wholesale appropriation of Henry James dialogue for a key sequence, this is an unexpected citational layer to slap on top (images of monkeys do recur). But Motors gave itself room for continuous mutation by essentially stringing one short film after another; Annette, while synopsizing as stereotypically “batshit” in its overtly artificial stylization and baroque plot twists, travels in an unexpectedly straight tonal and thematic line from start to finish. McHenry’s stand-up sets, the most sustained non-singing dialogue the film has, outline concerns that are then diligently followed through on, the second performance expanding on the first’s darker undercurrents. To the crowd’s increasingly audible disgust, McHenry describes an uncomfortable sexual encounter with his wife that, in his monologue, ends in murder. McHenry berates them in response: am I telling you more than you’re comfortable with, he yells? (To be fair, nobody asked; this is kind of a self-inflicted wound.) Divisive in different ways (Sparks have 50+ years of experience in answering the question “is this a joke”), band and director find common ground in their contempt for audience expectations. Driver thanks Bill Burr and Chris Rock in the end credits while Carax commits to the visual bit, filming the sets in long, lazy left-to-right glides.

A lot of Carax’s recurring concerns, including a very strong helping of guilt and regret, are recognizable in McHenry; Sparks are more identifiable in the nameless Conductor, played by Simon Helberg. As a core cast member of the perpetually (and rightfully) mocked sitcom The Big Bang Theory, Helberg’s presence here has already prompted a number of “WTF” reactions, but he can actually play the piano on-camera as the part requires, eliminating the need for distracting cutaways and hand double inserts, and his voice sounds more like Ron’s than not. Women have rarely been part of Sparks’s musical world, aside from a few ’80s duets with Jane Wiedlin and Sparks’s (excellent) work writing/producing Nöel’s 1979 disco album Is There More to Life than Dancing? However, one very familiar recurring type of Sparks narrator is a man seething with jealousy over not getting enough attention from women (or, almost as frequently, over the men they choose instead), as in “Ugly Guys with Beautiful Girls” (“you always know what the story is”). While sort-of praising their 1977 Introducing Sparks, Robert Christgau called them out for their “fear of women,” which he identified as “hateful”—he wasn’t necessarily on the wrong track, and 50 years of returning to the same well does kind of speak for itself.

As someone who’s never truly enjoyed a Carax film but is a huge Sparks fan, this is my favorite of his movies—an invitation to sit down and listen to 2+ hours of new Sparks music, vocally interpreted both by Russell (whose multi-tracked stand-up audience vocals are very much in the pocket of their work since 2002’s minimalist-loops reset Lil Beethoven‘) and the game cast. I’ll never know what it’s like to watch the film as a disoriented non-fan, which raises the question of who Annette’s ideal viewer is: a Sparks super-buff (and thus instantly oriented by the familiar-sounding music) or someone completely unfamiliar with their work (therefore creating immediate, presumably desirable disorientation)? Removed from the Sparks-verse, Annette is a lavish and unlikely use of, among other production entities, Amazon’s money (production was announced as budgeted at $15.5 million), the kind of perverse anomaly that’s always nice to see. For me, the film more or less zipped by, even as its tortured spiraling remained theoretical rather than affecting until the very last scene, an unexpected duet that sticks the emotional landing at the last second. Carax includes a shot from The Crowd and lists King Vidor in his end credits thanks, and I’d expect nothing less from the cineaste maximalist. A certain kind of viewer is prone to automatically respond strongly to maudits and auteurist follies that shouldn’t logically exist—in this case I’m not sure I’m that viewer, but as a longtime Sparks fan it’s extremely cool this exists.