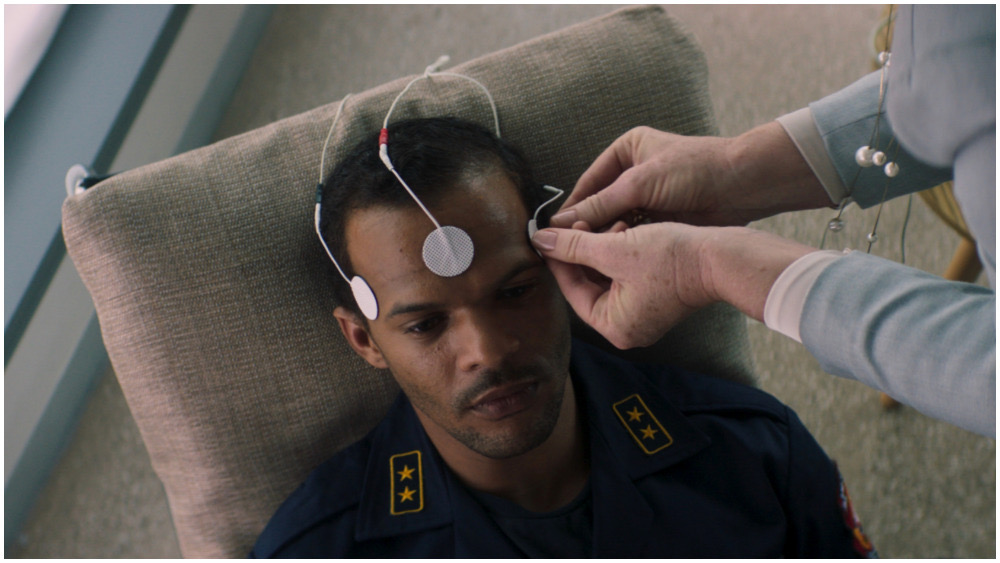 Long before “fantastic cinema” became a thing, Montreal’s Fantasia already was an institution. The grand-peré of North American genre film festivals marked its 25th edition this summer, its second in this nervous and conflicted new age of hybrid online/IRL presentations, and despite the obstacles and anxieties inherent in such, the event as ever stuck to its fundamental mission. Montreal was founded by Catholic missionaries 1642, but the festival’s lower-case catholic taste is its strong suit. Even while checking off all the boxes – Russian Screen Life freakouts (#Blue_Whale), Japanese stop-motion cyber-horror (Junk Head), revivals of obscure Swiss mid-60s spy thrillers starring Serge Gainsbourg (The Unknown Man of Shangidor), samples of that peculiar genre-within-a-genre, the genre documentary (Alien on Stage), and so on – the festival always harbors surprise.

One of several films programmed as part of a South Africa focus, Indemnity was touted as the country’s most ambitious homegrown action flick to date, with wild stuntwork and Michael Bay-aspirant pyrotechnics. It made for immensely satisfying viewing, anchored in star Jarrid Geduld’s endurance-run performance as Theo, a PTSD-riddled former firefighter who wakes up one morning to find his investigative journalist wife dead in bed beside him. He remembers nothing, but the cops haul him off, with strong intimations of a set-up, owing to his wife’s muckraking discovery of a kill list with his name on it. Geduld plays the wronged man who must go against all odds to uncover the truth, while dealing not only with the police he soon escapes, but mysterious assassins slaughtering everyone in his path and the frequent onset of what seem like really awful acid flashbacks. As he races towards the core of a global conspiracy with its tentacles reaching deep into the highest echelons of power, Theo also pares away the layers of his own psychic damage – and the aftershocks of a secret experimental program that holds the answers to everything. Mostly, though, people die in very exciting ways and whole warehouse blocks go up in violent flames. Travis Taute’s debut feature is a raging whirligig of all your favorite action tropes, with an Afrikaaner spin and relentless energy that draws a lot from the example of The Raid and the many works of Liam Neeson, with a dash of Cronenbergian bio-paranoia.

Largely unknown in the United States, Kazakhstani cinema can be funny in ways that have absolutely nothing to do with Borat. Although, the spirit of Sweetie, You Won’t Believe It isn’t terribly far from the anarchic intent of the Sacha Baron Cohen spoofs. Ask the plastic blowup sex doll. A comedy of misadventure in which a male-bonding roadtrip goes hellishly wrong, the film takes cues from the likes of Clown and The Hangover, but also exploits the tension between urban and rural cultures, as a trio of big-city pals heads out to the countryside on what should be a bucolic fishing jaunt – even though no one knows how to fish. That doesn’t matter when a crew of hapless gangsters is on their trail, themselves tracked by a one-eyed assassin. No matter the graphic bloodshed, the impossibility of their plight, the constant threat of a gruesome slaughter, the film’s insecure hero Dastan (Daniar Alshinov) reserves almost all his anxiety for one antagonist: His pregnant wife, whom he fears more than death. Into this old-school formula of the weak-kneed husband given an absurdist opportunity to prove his manliness, director Yernar Nurgaliyev thrives on a “three stooges” vibe that matches a jittery pace to larger-than-life acting styles, suggesting that zany is zany regardless of far-flung cultural milieu.

For all its wanderlust, Fantasia also is the place to double down on Quebecois cinema, as the festival always reps hard for the home province. I wouldn’t call it mindlessly enjoyable, because there’s quite a bit of thought and nuance dedicated to the way it balances humor both subtle and grotesque, and a great sense of rhythm to its finger-snap pacing, but as the title implies Brain Freeze optimizes a certain state of suspended intellectual engagement for the benefit of movie-movie chills. That it does so as successfully and with such flair is a surprise because isn’t everyone exhausted with zombie flicks? Writer-director Julien Knafo conceives the requisite novel twist, which takes the story into very contemporary focus as a kind of eco-thriller. At what price the greenest grass? A new chemical designed to sustain the verdant glow of lawns, or in this case a private golf course in an elite gated community, throughout the long Canadian winter achieves much more than its goal. It’s the ultimate Bernie Sanders fantasy: The rich turn into zombies and start eating themselves! (Unfortunately, essential workers get chomped, too, but then they finally get to exact their revenge on Capitalism). One of the non-rich is Dan (Roy DuPuis), the senior security guard, who teams up with inevitably orphaned teen Andre (Iani Bedard) to escape glowing-eyeballed doom and save the world. The action is rife with class warfare gags and weird science riffs, but lets the eerily clean, lifelessly minimalist interior design of the rubber-stamped mansions speak for itself.

It was easy to love The Slug, a South Korean film that places its protagonist Chun-hee (Kang Jin-ah) in conversation with her own childhood. The adult Chun-hee is mired in stasis. She lives with her aunt and uncle in the same home where her parents raised her until their untimely deaths. That unhappy youth has cocooned Chun-hee, perhaps as a defense mechanism, but her relatives are eager for her to move on. This may be difficult, as her sole employment is peeling garlic to sell to restaurants. Struck by lightning during a walk through a park, Chun-hee experiences a phenomenon: Her younger self (Park Hye-jin) appears, melting temporal distinctions and offering a chance to reconcile with all the negativity and abuse behind her. The flashback-driven story is much lighter in effect than the above summary suggests, made touching by the lead’s fine-tuned, warmly human performance and laced with affecting bits of detail. The fantasy element reminded me most of that wave of quirky (sorry!) Japanese comedies from a decade or more ago in which a loser-slacker figure finds unexpected redemption from the terror of the same old day through some eccentric agency. In this case, it’s a female character who’s processing family trauma, and the magical elements point to self-actualization not wacky humor. The film’s striving for sublime gentility endears.