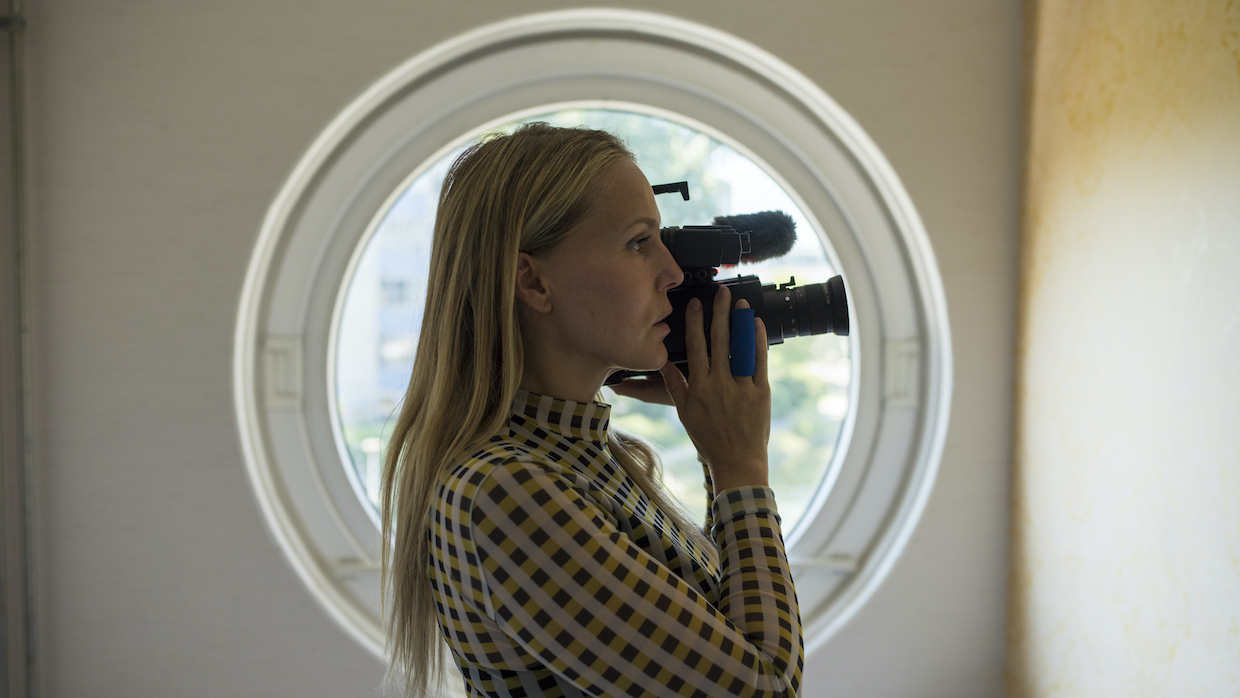 It’d been nearly a decade since I’d seen a Jacques Doillon film during its premiere festival run, but Third Grade almost immediately reminded me what his work, since at least 2003’s Raja (where I first came in), feels and looks like. Restless characters roam with the sharklike compulsion of actors determined to charge every single moment; the camera slowly pans or dollies to keep everyone just within the frame’s boundaries, resting during the occasional static composition but rarely for long. Conflict is everyone’s inevitable destination, and sooner rather than later; people begin at such virulent odds that you fear for both their physical and emotional safety. These movies feel potentially endless in a good way—initially seeming to promise a trajectory from a clear primary conflict to its resolution and the film’s subsequent end, then blowing past that potential terminus to fresh, unforeseen conflicts and reconciliations in a moral universe where sexual transgression is not a disqualifier for redemption or love.

It’s equally wild and unnerving to watch Doillon bring these tough-minded dynamics, which he often uses to stage adult psychosexual standoffs, to eight-year-olds—then again, adolescence is its own tough-minded hell. On the playground, Claire (Roxane Barazzuo) is regularly bullied by Kevin (Cyril Sader), whose harassment rapidly transitions from verbal threats of violence to attempts to grope underneath her skirt (because, he says, he “loves her”). Claire’s mother (Nora Hamzawi) is predictably horrified and attempts to ensure that her daughter both remain safe and want to attend school by demanding action from either the administration or, failing that, the police. But the authorities are understandably wary of definitively labeling an eight-year-old as a predator, and Claire’s mom can tell she’s on borderline Karen terrain in her demands for action—her daughter has, physically and economically, a clearly privileged experience in ways the visibly dispossessed and unstable Kevin lacks.

From one perspective, Third Grade effectively encourages “but he’s damaged” sympathy for an abuser—adolescent or no, that can be a hard leap to make. Predictably, Kevin’s father (Antoine Cholet) turns out to be a bully and sexual aggressor who regularly hits his son. (Third Grade’s COVID trappings are mostly matter-of-fact and incidental, but this character’s rendered even more unpleasant by making him someone who refuses to wear masks in public settings.) Abuse is a cycle, sure, but that’s not quite what Doillon is attempting to illustrate when he characteristically complicates this character to the outer limits of potential incoherence: this father is alternately abusive and loving, charismatic and repugnant, admirable and appalling. At some point, this can stop feeling like an attempt to embody the complexity of human experience and more like a theoretical project, or perhaps just an exceptional opportunity for actors. This is, nonetheless, a consistently riveting, occasionally deeply upsetting movie, my favorite of Doillon’s since Just Anybody—less toughminded than, say, L’enfance nue on the rough-French-adolescence scale but just barely.

Where the (77-years-old!) Doillon has made a movie that’s extremely contemporary in, among other things, the school structures attempting to contain the conflict and the vocabulary used to discuss sexual assault, Third Grade also has an unwillingness to be fazed by upsetting material that can be seen as either commendably unabashed or merely regressive. Sam de Jong’s Met mes (the Dutch director’s third feature, and first I’ve seen) is contemporary in entirely different ways: to be extremely of the moment in this case is to fetishize particular strains of technological nostalgia. So, while Met mes (the title, said repeatedly, translates as “with knife”)1 is, in some ways, aggressively Now—with a pastel-heavy palette heavy on aggressive pinks and greens suggesting Ryan Trecartin on a vulgar saturation color correction bender—a clunky JVC VHS camcorder redolent of the ’90s is central to its plot, and the connotationally nostalgic images it produces are semi-regularly intercut.

Game show host Eveline (Hadewych Minis) abruptly decides she wants her life to have actual meaning and value—preferably political, as she intends to make a documentary anatomizing the social structures of her city. (It sounds, her boyfriend says, like the second season of The Wire.) But Eveline’s limousine liberal goals are short-circuited when her newly acquired JVC is stolen just as she’s getting started by Yousef (Shahine El-Hamus), a teenager who wants to flip the gear for money to buy sunglasses; her untrue testimony that he robbed her at knifepoint (given, almost without thinking, for insurance purposes), the effects that lie has on the POC teen’s future and her subsequent guilt propel the plot. Blake Williams has used the word “cretinism” to describe Bruno Dumont’s peculiar comedies from P’tit Quinquin onwards, a term that’s applicable here for similar reasons. All performances are tuned to a kind of Instagram-commedia-dell-arte pitch, human cartoons within de Jong’s overtly artificial aesthetic which—with its parade of sweetly (and not so sweetly) dumb guys, social media-friendly color palette and repeated emphasis on braces as inherently hilarious—is also reminiscent of Diamantino.

For the first third of its running time, Met mes seemed like a potential movie of the year, a restlessly inventive comedy with seemingly infinite unexpected framing/blocking gags and a penchant for fantastical elements inserted with disconcerting casualness. When de Jong runs out of new locations and set-ups, the energy (even at 78 minutes) flags dramatically. Eveline struggles to finish her documentary, repeatedly insisting (whenever her editor or subjects ask what she’s waiting for) that she’s “building to a climax”—in fact, she’s padding out the process (in her case, to avoid admitting her moral failings by creating a different narrative), and this movie’s doing the same (seemingly just to get to feature-length). But the candy-colored tomfoolery still very successfully disguises a potentially simplistic didactic statement on how the police system and media operate hand-in-hand to enforce punitive and racist systems against communities of color. Met mes is most interesting when focusing on Eveline, a delusional heir of David Holtzman’s whose ideas about “documentary ethics,” filmmaker-subject relations and what voiceover narration can do to erase guilt are a fairly scathing parody of myopic verite—not a new target, but aimed for with up-to-the-minute specificity about broadcast television demands and bad ideas about nonfiction story construction. That combination of doc-norms critique and pure formal invention is a rare one, worth checking out even if it would be better served as a medium-length work—unfortunately a form discouraged by a different set of normative expectations.

One way to resist those norms is to make a determinedly sprawling (135 minutes), pain-in-the-ass, perceptibly microbudget (and proud of the invention that requires) movie like The Dream and the Radio, which I wouldn’t have blind-sampled without friends’ recommendations. I’ve never had the true believer intensity that would draw me to a director’s bio that reads, in part, “Renaud Després-Larose studied philosophy in Montreal before choosing to devote himself to cinema.” Oh good! I sat down and devoted myself to the darkest (in a very literal sense) movie I’ve seen since Vitalina Varela; it wasn’t super-surprising (in fact, rather validating that I guessed right) to see Pedro Costa thanked in the end credits for an indeterminately phrased form of support (“The little bit [that makes a difference]”). Alongside his name sit those of Nicolas Klotz and Elizabeth Perceval, whose 2011 Low Life walks a line similar to Dream of being almost hilariously pretentious in service of rendering the lives of highly political grad student-types with admirable, and finally endearing, accuracy. The last name included in the international portion of this acknowledgments section is the Collectif Malgré Tout, whose website describes the organization as devoted to leftist causes and structured on a “Franco-Argentinian” basis.

Dream’s deliberately slack first half is loosely structured by a potential love rectangle. Two of its points are Eugène and Constance, a couple played by real-life couple director Després-Laros (also Dream‘s cinematographer, producer and editor) and Ana Tapia Rousiouk (co-writer of both the script and score, and also credited for sound). The aforementioned darkness is both a consequence of the film taking place predominantly at night, often outside, but also because Eugène and Constance regularly live in candlelit—this turns out to be a cost-savings measure rather than just an affectation in a nice, surprising touch. A regular guest at their home, Béatrice (Geneviève Ackerman—yes, she’s also the casting director), gives inconsistent signs of being attracted to Eugène; in the meantime, a chance encounter with pseudonymous political activist Raoul Debord (Étienne Pilon)—seemingly an example of the increasingly-rarely-seen “Situationist fuckboy”—attracts both her and possibly Constance.

There are long scenes of what the not-quite-collective calls “reading rituals,” park flirtations and snippets of Eugène’s video store employment. At pretty much precisely its halfway point, Dream stakes a lot on the recalibrating impact of a nighttime political happening sequence where Raoul throws down the rhetorical gauntlet at extended length. His speech sounds, appropriately, like a lot of recycled Debord, a familiar assemblage of radical tropes while some grey-haired elder plays the theremin. The images turn into Nam June Paik-tribute video art, overlaying his near-patented techniques onto Raoul who, afterwards, cheerfully admits his text is all recycled—the more important point is doing whatever it takes to get people going again. (This gesture is no less regressively fetishistic, in its way, than Met mes’s “90s kids love camcorders” vibes.) Whether this coupling of fairly precisely periodizable rhetoric and aesthetics is intended as fond pastiche of a dead but still appealing moment and a sincere demonstration of how to renew it, or as an admission of futility—that some political ideas can never find new forms and renewed vigor, and that some battles are forever lost—is an open question for me. Given that the film is, by its makers own description, loosely based on their lives, it’s unlikely any defeatism or cynicism is intended.

Dream won me over even if its politics left me skeptical/bordering on aghast. (If you don’t feel the same when you see a character’s Facebook page covered in Debord/general situationist memes, adjust expectations accordingly.) In part, that’s because it’s often beautiful—these night exteriors and candlelit interiors are reminiscent of their specific, explicitly cited antecedents while being pleasant and unique on their own terms. This is definitely a “cinephilic” movie, a word I put in scare-quotes because of its potential pejorative connotations: it’s a very specific type of gesture to have a character watching TV suddenly be taken aback by a breaking-news announcement of political violence, then have the announcer implausibly announce “now back to John Ford night.” But Dream is also amorphous enough to wriggle out of stereotypes and/or lampoon its own portentous ethos. In an extended daydream while budgeting with his girlfriend for a future without work, Eugène swears the TV he wants to buy will never be used for actual TV viewing, “only for movies,” even as he envisions himself watching a Canadiens game—the movie’s seemingly obligatory “all Canadians, even anti-hegemonic activists, still love hockey” moment. And, as far as gestures towards resistance, there’s no way I wasn’t going to be amused by a finale inviting viewers to imagine storming Quebec’s Bell Media Tower.

1. A friend recently asked if I thought it was a mistake to have their movie enter the world only under its Spanish title, with no English-language title, a question that seems to be coming up a lot lately, so I think it’s worth quoting de Jong’s reasoning on why he chose not to have an English title: “As a kind of a response to this big current trend in the Netherlands, where even the Dutch films that do not have an US or British distribution all have English titles. I think we can be proud of our language, so we just keep it with a Dutch title.” ↩