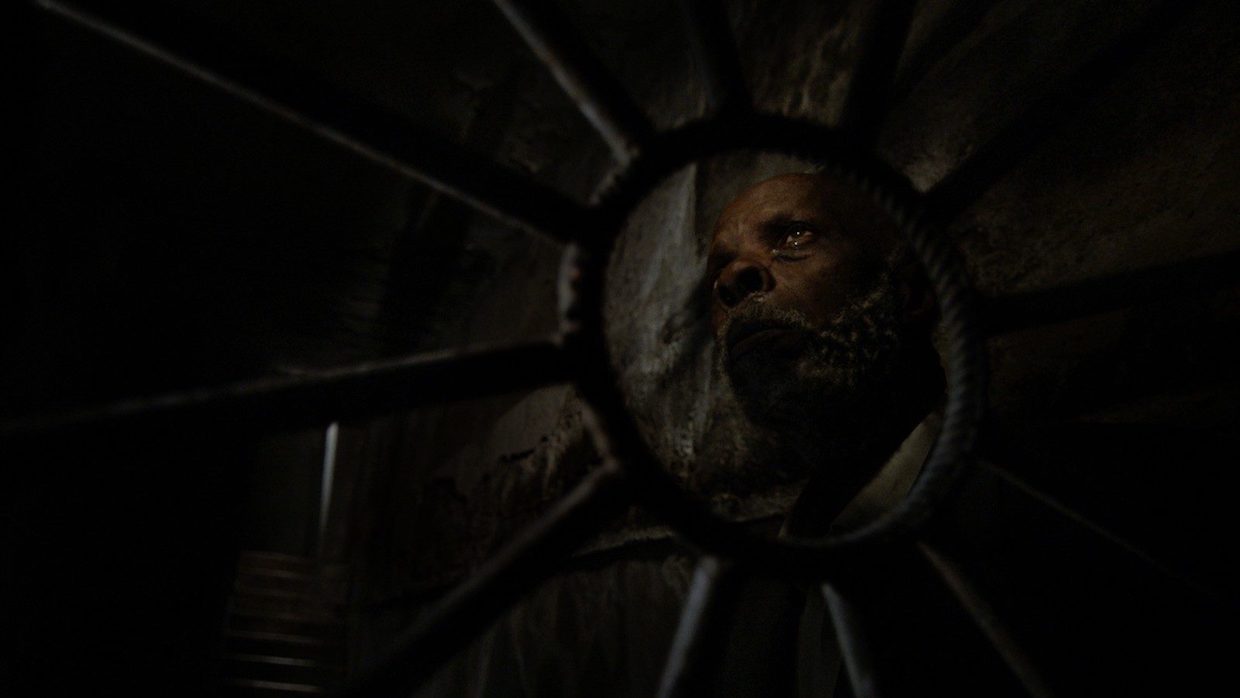 Vitalina Varela is a luxuriantly claustrophobic staging of a story Pedro Costa’s title subject, playing herself, first orally recounted in 2014’s Horse Money. The world Costa constructs around her is, initially, an endless night—daylight is, at best, the barest suggestive sliver peeking in from outside. As the narrative unfolds, more sunlight penetrates interiors, but a full radiant glare seems, at best, a hypothetical perk for people with more money, and in the very final-stretch shots in exterior day, colors have been graded down enough where the effect isn’t overwhelming but mutedly in keeping. There isn’t a pixel Costa hasn’t accounted for in his mix of captured exterior night shots in Varela’s Lisbon neighborhood and extensive studio work. Costa’s described how this darkness represents the real conditions of her life—Varela’s house is indeed small, dark and windowless—but he’s amplified this starting palette into a total universe for some of the blackest images of the digital era, reaching as far down the color spectrum as he can, with no conspicuously crushed greys or splotches. Costa’s technical knowledge must be hovering around Fincher levels, and he’s taken this formidable mastery to render the lives of dispossessed subjects in the most severe manner possible. Respect is obviously due.

Writing from Berlinale 2016, Blake Williams wondered (re: Salomé Lamas’s Eldorado XXI, which begins with an hour-long static wide shot) “if we might, hopefully, be reaching a tipping point away from art cinema’s reliance on difficulty as a tactic for earning our respect.” To rephrase: at what point does the respect difficulty raises in sympathetically inclined viewers cross the line to become too difficult, creating obstacles to pleasure/comprehension/attunement so vast that any final reward just isn’t worth it? Excess of asceticism is definitely a judgment call, and to some extent I feel like I’ve been beating my head against Costa’s massive constructions I’ve seen from the last decade (Colossal Youth, Horse Money) without ever really understanding why things have to be so hard. Because make no mistake: no matter how rapturously or knowledgeably Costa speaks about classic-era Hollywood image-makers like Jacques Tourneur or Henry King, we are firmly on the other side of the gauntlet Straub-Huillet threw down.

Costa’s first feature, 1988’s O Sangue, is surprisingly funny, and there’s an alternate universe where he continued down that path—of course, that’s not what happened, by and large. In 2001’s (hilarious, warm) Where Does Your Hidden Smile Lie?, a portrait of Straub-Huillet working on 1999’s Sicilia!, there is a sequence that clarified for me, as much as anything they’d said in interviews, the baseline artistic instincts that drove the couple. Danièle Huillet is editing a sequence and annoyed because a tiny tree branch whipped by the wind enters the frame momentarily. It’s a matter of a few frames, probably not even a second, but Huillet can’t take it: that branch should not be there, its presence is intolerable and the necessity of removing it is, on a technical editorial, an enormous but necessary pain in the ass. You cannot fake this kind of driven-ness—Huillet and Straub are viscerally tapped in on a level of heightened concentration that’s simply inaccessible to me. Costa, a Straubian, shares that concentration, and more power to him for it.

I repeatedly recalibrated my eyes throughout and muttered “wow” four or five times—there’s consistently much to look at. Nor is the difficulty level related to narrative legibility: either I’ve gotten smarter (unlikely) or Costa’s taking it easier on viewers (somehow even more unlikely), but this is not tough to follow coming in cold. (I’ll admit I’d totally forgotten hearing Vitalina’s story five years ago—clearly I’m not the target for Costa’s vision.) I laughed when Vitalina bumped her head into a doorframe and cursed the darkness, the smallest of jokes-that-aren’t-really-jokes, and was jolted a few times when Costa (building on similar moments in Horse Money) drops a very loud sound (a dog barking just off-frame etc.) into the meticulous mix—like, of all people, P.T. Anderson, Costa’s not making horror films, but he still likes to add a stinger or two. It’s a somber world with unnerving undertones, designed for awe and discomfort in equal measure, which is very justifiable. If I emerged in a fog, that’s by design—still, this isn’t the exhaustion I crave.

As with Vitalina, one of the related pleasures of Oliver Laxe’s Fire Will Come is the chance to revel in the pleasures of horror movie imagery—night, trees, sinister lighting—without waiting for a shock to land. The intensely gorgeous opening sequence begins with static trees, then their domino-esque collapse, tracked in a left-to-right dolly. A reverse shot eventually reveals the bulldozer responsible for their demise, which isn’t a surprise but the images are still pretty magical: in a post Apichatpong Weerasethakul universe, it feels sometimes like I’ve been watching 20 years of variations on shots of forests, but this one is definitely different. Like There Will Be Blood, the title Fire Will Come is a promise and, at the end, it does, in spectacular fashion. Captured in 16mm over two consecutive summers (one without actors, one with), the flames are so close as to make you wonder how the equipment didn’t start melting—this is Lessons of Darkness territory.

Between the open bulldozing and closing flames, Fire Will Come is a determinedly low-key live-with-the-seasons portrait of life in Laxe’s home village in Galicia (his first two features, You are All Captains and Mimosas, were shot in Morocco, where he’s lived and worked for a long time). The sheer physicality of Fire’s opening and close aligns with those two films, which were landscape-based as much as anything and showed a deep affinity for Kiarostami (lots of olive trees swaying in the wind in Captains), echoed here in extreme long shots of cars traversing hillsides and shot/reverse shots of driver/passenger within said cars. The Galician landscape is mediated not just by fires but snow, mist and rain—here, clear, sunny days pop out with abrupt force.

I haven’t yet mentioned the plot—there is one, and it’s pretty slight—but my main note is that, for the first time, Laxe’s ability to mediate narrative and nonfiction footage feels slightly forced. You are All Captains‘s self-interrogating premise had Laxe and his real film school students as versions of themselves, playing with the boundaries of reality and construction; Mimosas‘ obvious arduousness included stunts that looked dangerous and uninsurable, a form of physical reality more forceful than the story being told. Here, the serene story told between dangerous spectacle has its modest pleasures but is comparatively dwarfed by what it’s sandwiched between. Nonetheless, Laxe is one of the most curious filmmakers working right now, and the fact that he hasn’t settled into one storytelling mode yet keeps me curious as to what’s next.