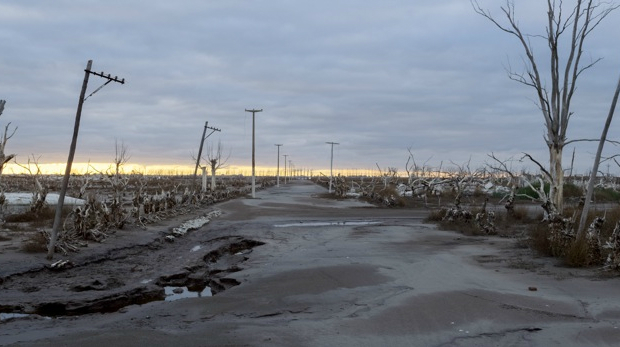 Away from the spotlight of the Berlinale’s (increasingly arbitrary-looking) pick of films competing for the Goldener Bär, the festival’s Forum section sits pretty as a well-established delivery system for reliably bold films that can range anywhere from quirky American character studies to rigorous, avant-garde documentaries. Many Forum artists and filmmakers are unknown quantities in North America, and walking into most of the screenings is as close I get lately to genuine tabula rasa cinema experiences; you really don’t know what you’re going to get here. Lately, the Teutonic-favored American artist/filmmaker James Benning has been taking his feature-length works to the neighboring Viennale (though he does have a suite of new half-hour videos playing on some monitors in a Berlin art gallery right now), but his aesthetic influence can be seen all over a number of the section’s (and the festival’s) better films, not least in Nikolaus Geyrhalter’s sublime, ironically-titled new 4K piece, Homo Sapiens.

There are, naturally, no homo sapiens ever visible in the film, Geyrhalter’s camera instead framing grand, uncharacteristically deserted public spaces and structures which appear to have been hastily abandoned. But absence begets presence, and each of his trademark static, symmetrical compositions— running approximately fifteen seconds each and never once moving—can at times be explosively active, charged either by gusts of wind, inklings of animal life, or imagined realities implicit from the mise-en-scène. Whether the space is recognizable (Fukushima) or not (several anonymous theatres, shopping centers, churches, hospitals, and beaches), Geyrhalter’s frames are sprinkled with remnants of the culture, consumption, and rituals that should be being performed there, and invariably evoke questions of the missing actions or whatever possible apocalyptic crises that could have resulted in the discomfiting vacancies on the screen.

Over its running time, a vague moralism creeps into the project. The accumulation of just so much stuff that we, the implicated homo sapiens, make and waste, gets overtaken by images of more outdoorsy, natural spaces (the crew’s footsteps carefully elided), and a perhaps digitally-generated whiteout in the film’s final shot that implies the beginning of a new ice age. Yes, we’ve probably fucked ourselves over for good, and this is the mess we’ll be leaving behind. But there’s a smarter, more visceral feeling of unease at play here that Geyrhalter’s previous work (all more or less equally strong and equally Austrian) has often had, and that’s rooted in its legitimately uncanny — and okay, misanthropic — gaze upon the world, which feels ambivalently subjective and objective. This is a practically post-human film, where the human is understood as necessarily involved in his own removal from the picture, both totally there and absolutely not, in images that could credibly have been produced either yesterday or ten thousand years from now. It’s likely that if you see this picture it’ll be as I did: in a room with other individuals; and yet, you will believe, at some point during its running time, that the world outside the room has vanished.

Salomé Lamas’s handsome and rigorous film Eldorado XXI was drawing comparison’s to Benning’s Ruhr (2009) long before anyone at the festival had even seen it, and the comparison is not incorrect, at least in terms of its most valiant formal gesture. The film opens, after a couple of quick establishing shots of the mountains surrounding La Riconada, Peru, with a static, hour-long shot of mine workers ascending and descending one of the area’s several winding, snow-dusted inclines. Beginning at the edge of twilight and plunging deep into the night, the aforementioned path maps a “Starry Night”-esque twist and swirl of anonymous soot- and uniformed-covered bodies into the frame’s foreboding, almost cosmological vanishing point. As the sun retires, the workers’ head lamps gradually become the sole source of visual information, painting the mammoth coal pile in their ominous glow and imbuing this exhaustive document of exhausting labor with a trance-inducing sense of mythology.

An hour later, the film shift gears; its second half is relatively spry, moving through various regions of the work area, stopping in to watch and listen to, e.g, a hut of women who discuss the benefits of chewing coca, and fireside ritual that could have flailed straight out of a Ben Russell film. This section of the film both over-complicates the film structurally and also represents a bit of bet-hedging, as if Lamas wanted her film to have its self-congratulatory art film difficulty and eat the trendy socio-ethnographic cake, too. Its formalism, in retrospect, feels a bit disingenuous, even elitist; why make an effort to clear the room— to alienate all but the most righteous “pure cinema” warriors before unpacking the project’s meatier social activism, its more humanizing elements? In the closing credits, Lamas tips her cap to a number of members of the Harvard Sensory Ethnography Lab, including J.P. Sniadecki and Stephanie Spray, two artists whose past works (at least the ones that I’ve seen) have managed to shape social portraiture with forms that open up, rather than suffocate, the material, and I wondered if we might, hopefully, be reaching a tipping point away from art cinema’s reliance on difficulty as a tactic for earning our respect.

Even more difficult in many regards was Philip Scheffner’s Havarie, which took a three-minute and thirty-six-second excerpt from a ninety minute video of a refugee boat drifting in the sea off the coast of Cartagena, Spain, and slowed the footage down so that it took ninety minutes to play (the film is thus effectively moving at 1fps). The step-by-step, frame-by-frame sequence of low-grade digital footage, which looks as if it were probably shot on a FujiFilm point-and-shoot camera, acquires a hypnotic quality over its running time, and is scored by what sounds like a cast of several characters and re-enactments of radio dispatches reporting boats packed with people floating towards Europe. Since the images that we see are fundamentally unseeable, shot as they were from quite a distance away from the refugee boat, on what looks like a cruise ship (a mid-film pan to the right and the left, revealing the side of the structure on which the cameraman is positioned, is easily the film’s most expressive moment and its highlight), the project ends up sitting, unfortunately for Scheffner, fairly unfavorably next to Gianfranco Rosi’s Fire at Sea, which also premiered in this year’s festival, and which has far more compelling footage of refugees pulled in and rescued from their boats, footage Rosi shot on the refugee boats themselves, effectively letting us see precisely that which Scheffner claims we need to see but never can.