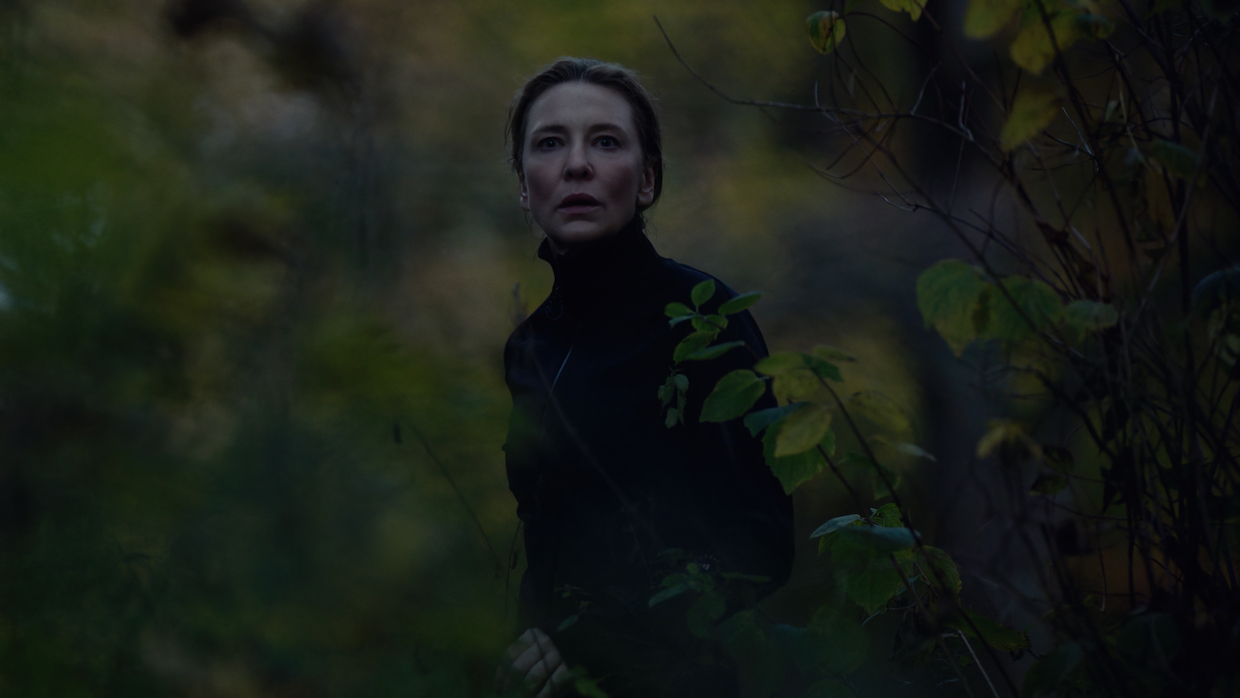 Todd Field’s TÁR simulates ethical complexity to “call into question” cancel culture, which—no matter what Gina Carano, Peter Vack et al. have to say about it—is not an unprecedentedly bold or unthinkable move; millions of Americans are waiting to nod in vociferous agreement. The titular Lydia Tár (Cate Blanchett) first speaks at the New Yorker Festival, in onstage conversation with the magazine’s Adam Gopnik as himself. This prolonged opening (somewhere around 15 minutes) provides an excuse for a lot of expository background: Tár is an EGOT honoree, a revered modern conductor, a lesbian who’s also the first woman appointed to lead a German orchestra, who makes a point of performing contemporary work alongside the old warhorses and is a composer herself. If that sounds familiar, the conversation inevitably namechecks Leonard Bernstein—still most people’s image, if they have one, of the dark art of what a conductor does exactly—but also lists other meaningful predecessors for Tár including Marin Alsop, the real-life lesbian conductor mentored by Bernstein who became the first female leader of the Baltimore Symphony Orchestra and is presumably a slight inspiration for the character.

The conversation stuffs a bunch of thematically related material to unpack as the movie proceeds, like Tár’s thoughts on Gustav and Alma Mahler’s troubled marriage and, by extension, what different kinds of relationships and power dynamics mean for the creative process. It also establishes Tár as a supreme egotist who holds court all day every day, whether speaking one-on-one to an assistant or bending an entire orchestra to her artistic intent. Her perspective anchors almost every single scene, and nearly every exchange in the first act has her in one-on-one conversations where she dominates—if ego may be an inevitable precondition to positioning oneself as an artist, there’s less venial sins in her closet. It’s heavily and repeatedly implied from the beginning that Tár has a reputation for sleeping with her younger students; though the film takes over an hour to spell out its specific dramatic trajectory, it’s not hard to imagine the general direction it’ll proceed.

Before ratcheting up the #MeToo stakes, TÁR1 establishes a thorough, up-to-date knowledge of the classical milieu. Its levels of erudition feel organic to the characters and are slightly dazzling: a lunch conversation with Tár’s mentor Andris (Julian Glover) begins with an anecdote about the conductor Sir Thomas Beecham, proceeds to an argument about whether Beethoven plagiarized a Mozart symphony and concludes with a discussion about Schopenhauer. After lunch, Tár heads to a conducting masterclass that provides the movie’s big setpiece: it’s eternal artistic verities versus oversensitive zoomers as Tár gets into it with Max (Zethphan D. Smith-Gneist), a self-identified BIPOC pangender student who says that he doesn’t care about Bach and can’t get enthusiastic about an old white man who sired 20 children. That’s it for Tár, who starts faux-gently (“Oh, Max…”) and builds to a furious peroration that accuses Max of letting identity politics turn him into an idiot; deeply and understandably offended, he walks out. This scene might play like a clumsy attempt to impose a “woke culture run amok” anecdote on top of a specific setting, but the discourse is entirely in keeping with the current moment in a classical music establishment that’s never really managed to decouple the form from (not-so-implicitly) racist notions of cultural conservation. Consider the intense pushback Black professor Philip Ewell received after a talk which argued that the 19th-century German musician and theorist Heinrich Schencker was racist (he was), and that this racism meaningfully informed theories still taught as a bedrock of classical music study (it does). The dynamics between Tár and Max are exactly in that pocket.

Accuracy in the depiction of a specialist field is a good in and of itself, and Blanchett nails the peculiar mixture of technical wonkery and poetic interpretations of musical emotions that are characteristic of both masterclasses and rehearsals. In her confrontation with Max, Tár makes the case for Bach by playing the opening of Well-Tempered Clavier while annotating every bar: here, she says, Bach’s asking a question, here he responds to his spiritual yearning with humility. She infuses heightened, hammy emotion into every interpretation, reading the piece “line by line” in both senses. Music teachers and their ways of speaking hew close, manneristically, to acting instructors; Blanchett, giving another of her incredibly stylized performances that straddle the line between “thespian excellence” and “alien life form,” is an ideal bridge between the two. If TÁR is an anti-cancel culture/#MeToo film—and I believe that it ultimately is, no matter how much situational ambiguity is deliberately baked in to cover its tracks—it comes by the contextual specifics of its test case honestly.

Technically, Field errs on the side of master shot simplicity, moving the camera rarely and always with purpose; it’s not a super-formalist film, instead a calmly competent one. The first hour’s barrage of back-to-back dialogues is impressively airless, its confidence in the interest of un-contextualized intellectual particulars commendable, before opening up to less conversation-heavy scenes populated by more people. The plot grows more baroque: Tár (possibly) hallucinates various sinister happenings bordering on the supernatural and/or horror movie language (doom-y dollies into an ominously ticking metronome, an unseen woman screaming in a forest). It’s kind of a silly film (camp fans will enjoy watching Blanchett threaten an elementary-school age child with harm in German) whose attendant unpredictability keeps things lively. Rehearsing Mahler gives the film an excuse to namecheck Visconti, a connotational reminder of his use of the composer’s fifth symphony’s “Adagietto” in Death in Venice—this isn’t nearly as self-consciously or successfully operatic, but it’s a nice aspirational reference point. And, since Death in Venice focuses on what we could label an “age-inappropriate” relationship, its invocation also echoes TÁR’s thornier larger question, which is basically yet another round of “Can you separate the artist from the art, and should you?” In the film’s construction, Tár is at a minimum a Difficult Person and also a Great Artist. The extent to which she might be an abuser is deliberately kept ambiguous, which feels like an act of misdirection in a narrative constructed by a defense lawyer who knows it’s a quick path from “we’ll never really learn what happened” to “isn’t the mob always rushing to judgment?”

The film can be read both ways: Tár’s downfall comes from things she’s definitely done, maybe done and also flat-out misrepresentations of her words and actions, all equally weighted in the rush to judgment. The audience understands that not every charge against her is just, which seems less like complexity than stacking the deck. The film almost demands self-interrogation on the part of viewers, and it’d be cowardly (though tempting!) not to articulate where it left me. My general observation is that most people in my orbit—well-meaning and de facto liberal, or at least professing to be on both counts—understand that an awful lot of overdue reckonings are necessary, but also every single person seems to have a moment when, for them, things have gone too far. Normally this happens when a friend or beloved institution—one they vouch for—enters the firing line; all politics are unavoidably personal, and I’m always fascinated by where everyone draws their specific line. We all reserve the right to judge, grow, change our judgments, eat shit and/or admit error, even as the metastasization of bad-faith social media arguments about problematics have muddied the ethical waters. As someone routinely frustrated by how discourses have grown to become The Discourse, I routinely see it every which way: torn between my desire to simply like the work I like, the reluctant admission that there’s always more to consider and the understanding that a lot of people are making it awfully difficult to do either with any intellectual credibility. Beyond my obvious interest in its construction of the classical milieu, TÁR feels like a movie that feeds the worst in me; that’s probably why I like it.

1. [Per a publicist email: “Please note for written coverage the correct punctuation of the film’s title is capitalized: TÁR.”]↩