Underground: Sam Fleischner on Stand Clear of the Closing Doors 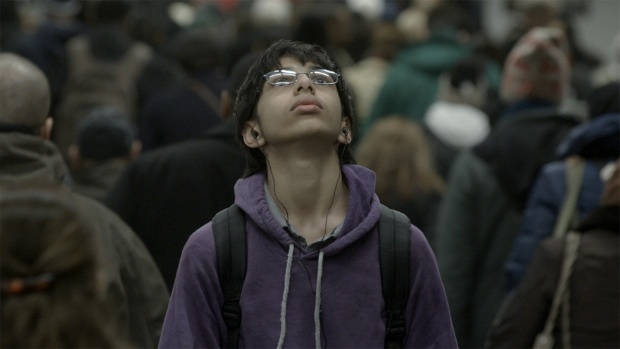 by Brandon Harris
in Directors, Interviews
on May 23, 2014

Sam Fleischner’s Stand Clear of the Closing Doors centers on Ricky (Jesus Sanchez-Velez), a remarkably intelligent, often unfocused midrange autistic 13-year-old boy who gets lost in the NYC subway’s endless subterranean tunnels. After his older sister (Azul Zorrilla) fails to pick him up from school, Ricky finds himself entranced by the dragon decal on a stranger’s jacket while trying to get home. That Sanchez-Velez, a non-actor making his screen debut, does in fact have Asperger’s syndrome adds a layer of verisimilitude to one of the year’s most fascinating performances. Ricky is a Rockaway Beach native whose mother (Andrea Suarez Paz) is a part time house keeper and illegal immigrant, struggling to stay afloat with her labor husband upstate. The movie never goes out of the way to point of the obvious: the last thing she needs is a missing child.

Intercutting the search for Ricky with his long day’s journey into night, Stand Clear also deftly spotlights how little resources many schools devote to children like Ricky, who needs extra care he clearly isn’t getting. One can’t imagine Fleischner pulling a Hirokazu Kore-eda and putting the kid in legitimate danger, but the loneliness of mass transit — the fear and exhilaration of all the metal in those curves — is brought to full bore. As the movie winds on and Ricky is forced to spend his last change on potato chips and glean bananas from homeless people, one begins to wonder just how long he can possibly stay on these trains without cracking in some major way. As days and nights pass and Ricky is forced to do ever more upsetting things to keep afloat, tension begins to enter this unusual and oddly moving story. 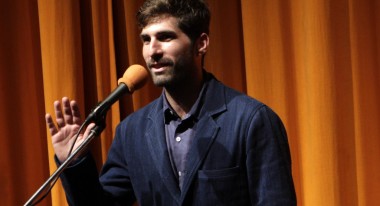 Filmmaker: Where did it start for you in terms of wanting to tell the story of an autistic young man and the journey he takes through the subways?

Fleischner: I’ve been interested in people on the autism spectrum since I was a kid. When I was in college I wanted to make a documentary about autism. In 2009 I read an article about this kid in New York running away for ten days. Nobody noticed him, nobody intervened, and I was like, “Whoa, that’s really crazy.” Obviously him being an immigrant, a person that’s somehow in the shadow, says a lot about our relationship to people of color, because that just never would’ve happened if it was a white person, a white kid from the Upper East Side. I was thinking too about the relationship of the family to the city and what the bureaucracy might be like. So I met that family, I kind of tracked them down and talked to them. But they weren’t really feeling the project. I had went into it thinking I wanted to do something like Close-Up where the kid could play himself and reenact his journey. What’s that Herzog movie, Little Dieter?

Fleischner: That sort of thing, but that kid was not interested in it. So my first approach after reading the article was to take a more kind of doc-view style thing. And then they weren’t into that. So I was like, “OK, I’m gonna have to cast it.”

Filmmaker: How did you first hear about him?

Fleischner: I had two people helping cast the movie. Eleonore [Hendricks] was looking for real people like she does so well, and then Susan Shopmaker was looking for looking for trained actors. So Eleonore was doing a big search in the city but turning up very little, because it was such a specific thing, somebody who’s high enough functioning on the spectrum that they could actually know what’s going on and act a role. Someone who looks Latino was important because I had already cast the mom. I really just wanted them to look enough alike that it wouldn’t be a distraction or anything. So she posted on blogs but things were not really coming together in the city. And Jesus’s mom saw a post and responded to it and they put themselves on tape.

Filmmaker: Did you immediately know that he was the guy upon seeing that tape or?

Fleischner: I didn’t know. I was definitely feeling like this kid can do it, but I actually was hoping to make the movie in the fall of 2011, but we didn’t have enough money and Eleonore wasn’t sure — there were a few people who weren’t certain that he was right. I was just like, “You know what, the script can be better, let’s just take our time.” I had half the budget in place, which wasn’t enough. The budget for this movie was like $150,000. I had 75K in the fall of 2011. It wasn’t coming together and so I was like “All right, I don’t need to rush this. I’ll wait a year.”

I really wanted to shoot it in the fall. And then that following spring I went and met with Jesus and we made a little short together in a day and tried a number of different techniques. I had him read some stuff that I wrote and we just free-styled a lot together. It was really smooth and good and I liked it a lot and I basically offered him the part after that point. Having made that short helped other people get behind my decision to use him as well. So that was that.

Filmmaker: I’m curious how you go about directing a young man who has some developmental issues. Are there strategies that you had to use that maybe you wouldn’t have with a more trained actor?

Fleischner:  A lot of people ask me that question. I don’t have any training myself as a director, I feel like I bring a unique tactic depending on who they are and how it feels for me to be with them. I wouldn’t say I had to take a really unique approach with Jesus, because we were just feeling each other out from the beginning and learning how to be friends and collaborators and interrupt each other. That was a big thing, he’s just like a kid. He is very verbal and he can just talk for hours at a time. He was so excited to not be in school and to not be in Florida.

One of the challenges was just bringing him back into being the character. We’re balancing these things too, because his idea of the character was so different than who he really is, and who he really is was actually more interesting than his idea of the character. A lot of what I was doing was trying to help him stay in this middle place with who he is and his way of talking and his natural curiosity about things, balancing that with this catatonic version of Ricky who he had sort of developed in his head from reading the script, because in the script he was a real introvert and quiet, kind of nonverbal angry kid. But that’s not quite Jesus.

Filmmaker: Obviously so much of the film is shot on the subway. You had a very small budget, which means you couldn’t rent a subway like Shame or Pelham 123, to name two random examples. What were the logistical struggles of, I imagine, stealing a significant amount of your movie, shooting in locations where you’re not allowed?

Fleischner: We didn’t have permission to shoot on the cruise boat on Wah Do Dem, so it’s like I love those kind of challenges. It’s almost like you’re pulling off a heist of something. We were actually kind of transparent and really clear with people about what we were doing. A lot of street photographers say they always ask permission and others never ask permission. Whenever I’m shooting in public like that I try to feel out who may be irritable and who’s kind of enjoying what’s going on. Just as we’re taking a different approach to all the actors, the same thing on the subway. Just trying to be as aware as possible of all the people around. They can feel involved if they want to be involved.

The biggest logistical thing is it’s always changing. You know you’re pulling into stations so quickly and the passengers are changing physically. You can’t have any control really, and you have to let go of a lot of ideas. I’m into that sort of thing, just kind of letting go and being open to things that are not planned. There’s a lot of nice accidents in there and characters who you really would meet in the trains. Like the kid who was missing an arm, we met him on the train and he wasn’t really doing anything, and he was soon cruising around with us. We did that scene in an hour and then he just cruised around with us all night when we were filming other stuff. And he and Jesus are friends now. They were just chatting the whole time when Jesus wasn’t in the shot. That was really fun when things like that would happen.