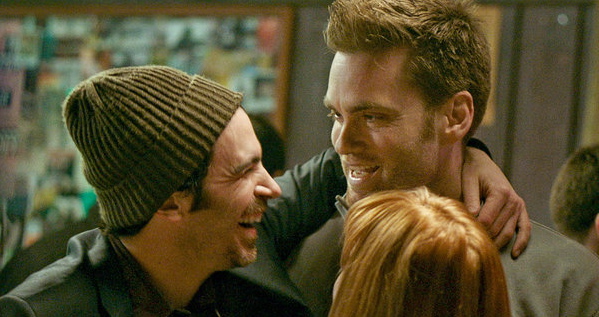 Three thirtysomething buddies reunite for a funeral in a sleepy Massachusetts fishing hamlet in Tom O’Brien’s finely tuned Fairhaven. They beat about the shores of this southeastern Massachusetts town in the dead of brutal winter, one which ace DP Peter Simonite photographs in such a way as to chill the bones of attentive audience members–even ones who don’t find themselves, or this movie, which debuts today both theatrically and on VOD, in a typically over air-conditioned modern movie house.

Close knit and working class, the milieu of O’Brien’s movie is at once confining and comforting for its three leads. Jon (O’Brien, himself), is a former high school football star haunted by the spectre of Tom Brady, who has given up the fisherman’s life to become a writer; Sam (Rich Sommer of Mad Men fame), is a jaded real estate broker suffering from a tough divorce with his now remarried high school girlfriend. And then there’s Dave (Chris Messina), who long ago left and has only been motivated to return by his father’s death.

Complications, misbehavior and long-in-the-making recriminations ensue; if this all sounds familiar, it probably is, but nonetheless O’Brien invests Fairhaven with a warmth, beauty and finely articulated–if bitter–honesty that peg it as a superior entry in the bad men dragging themselves toward maturity genre. 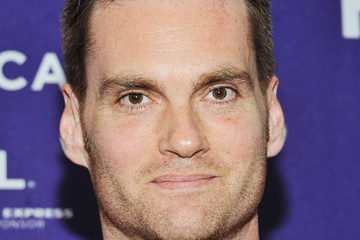 Filmmaker: Can you talk a little bit about how your background and perhaps some of the material in this film interweaves. Does this movie come from a place of loss, a loss of camaraderie or certain people in one’s life or a sense of connection to a community or one’s hometown? Because all of that’s rendered very specifically in your film.

O’Brien: Yeah, I think it came from a universal place of going home to friends and feeling disconnected because you’ve gone your separate ways, but you still have this path in common with people. You still have this bond with them and you go back to those relationships in the way that you had them in high school. You’re a very different person and sometimes it’s hard to communicate and to relate to the people from your past. But they’re always there and always part of you. So it’s sort of about making that work.

Filmmaker: What compelled you and Chris Messina to begin working on this story? You obviously wrote the film together, did you have a previous working relationship in some way?

O’Brien: We did, we’ve known each other for about ten years. We had a company together in our early twenties in New York. He acted in a play of mine that I had produced, and he also directed a play that I wrote and we acted together. So we’d done a lot of theater projects together and we’d always talked about film. When his career started taking off film-wise, we started talking about developing a film together. And so for about six-seven years off and on, I’d get it going and we’d put it on the back burner for a while.

Filmmaker: This being your first feature, what were the most challenging aspects of mounting this thing?

O’Brien: We were lucky in the sense. It’s funny that it was about old friends because I had one of my old friends from high school and he came on board and brought in the business colleagues that had never financed a film before and wanted to do it. So we got about seven of these business guys in and they did it for a very low budget and made it work with what we had. We were shooting in January in Massachusetts. We got this incredible crew and there was just nothing else going on, so we ended up lucking out that we could do it for very cheap.

Filmmaker: Did you and Chris write for the rest of the cast in mind? Obviously you’re in the film, but how about Rich and Sarah? Were they the kind of people that you had pegged early on in the process or did you find them in casting?

O’Brien: Well it was funny, Rich, Sarah, and also Alexie Gilmore came on about two weeks before we started shooting; we were kind of scrambling. Some other people had dropped out and we were scrambling. But because of Chris’s involvement we got some other actors, they all wanted to work with him. So Rich especially because they were doing another movie together and they were on-set together, and he just gave Rich the script and Rich came onboard. And Alexie flew in the week before. So the casting fell into place in a way that just happened, it was really lucky.

Filmmaker: Are you yourself a Patriots fan?

Filmmaker: I thought this was one of the more interesting portrait of that species of highly neurotic, maniacal sports fans, someone’s whose life is dominated by the spectre of specific athletes rise and decline. It reminded me a lot of a novel by Frederick Exley called A Fan’s Notes actually.

Filmmaker: This is really his only very significant novel, and he more or less writes a story about himself as a teacher in the 1950s who went to USC with Frank Gifford and who is slowly losing his mind, and it contrasts his extreme obsession with the New York Giants, and Gifford’s ascendence into being this all-American football superstar with his own psychological decline. It’s really wonderful. It was actually made into a film in 1970 and the film is completely unavailable. There’s a similar spirit in your film, although you take a much less sanguine view of human nature I think.

O’Brien: It was kind of vain when you think about it. It had always been in my mind a fall movie and there was a real football theme to it and we had always planned it in October or November, but we ended up shooting in the winter.

Filmmaker: So, obviously shooting in January in Massachusetts can be pretty rough. It certainly gave you guys some financial advantages in terms of quality of your crew. But was that particularly difficult? This is not a movie that is light on exteriors.

O’Brien: But just the way it worked out, we got the money and got everybody available to do it, and so we just hoped we’d get some unseasonably warm weather. And then of course the first day of shooting was like a blizzard. Our only problem then was having to match stuff. And so for the entire three-weeks of shooting it was like the worst winter for twenty years in New England. So we ended up getting this beautiful blanket of snow for the whole movie which ended up being an integral part of the film. So it happens, it all worked out.

Filmmaker: I think you really get amazing work out of your cinematographer, and in general the movie has a pictorial beauty that’s rare in independent films, especially microbudget ones. Can you talk about your shooting style and what, if any, influences you had and what were the guiding principles behind the aesthetic of the movie?

O’Brien: Yeah, Peter Simonite is amazing, the cinematographer that I met in one of our Atlantic pictures. We had like one conversation, I fell in love with his feel and he agreed to do it. He’s from Austin, Texas and had never been to New England. So he came up here with an outsider’s vision of New England, and it really worked out because he was amazed by the difference of what the light was doing as opposed to Texas. And he really loved that.

And, you know, Chris and I had talked early on about the kind of movies we loved and how we loved the 70s movies, and that kind of visual aesthetic. And we always wanted it to look really good, because there were a lot of improvisational movies coming out and they had that aesthetic of trying to look like they were trying to look bad or something. We just always wanted to have that improvisational acting style but within the frame of a really nice picture. So that was what we approached Peter with.

We were wanting to shoot on the RED camera and he was the one who pushed us to shoot on the Alexa. And nobody uses that camera, and it made a huge difference, I think. We really wanted to go into it making it free for the actors, so we would basically get to do that and Peter would just watch us and walk with us and base what he was doing on what was comfortable for the actors. We really had a nice working relationship in a different way that really helped us with the style of the film and what we were doing.

Filmmaker: Were there things that surprised you from the material as you were shooting it or aspects of the story of these young men, or maybe even not-so-young men anymore, coming to terms with their homes?

O’Brien: You know, that’s the thing, they’re not so young anymore and I think that was part of it. I was amazed how much the actors brought to it. Basically our process for this was, you know, Chris and I worked on the script for seven years so it’s not like we were working on an outline; we had  scripted scenes. So then the actors learned the scenes and said whatever came out of their mouth, and if you had an impulse to say something else, say something else. So we really tried to give the actors as much freedom as possible. I was lucky to have great actors who can really take advantage of that. I was just amazed how much they brought to it and really made it more than it was even on the page.

Filmmaker: Were there aspects about the story itself in terms of what was working and what was not, and what needed to be longer and what didn’t, that you discovered in post-production? What were the things about the movie that most changed from your and Chris’s conception of the movie to the finished project after it had been in the editing room?

O’Brien: The story itself was pretty close to what we had worked on, the scenes themselves changed a lot in terms of the dialogue. But the story was pretty solid. Except for the Alexie Gilmore character, that was the one who changed the most, and we shot that last. We didn’t realize after shooting the whole story that we would see how much the story was coming together and what was happening, and then we realized that my character really needed a positive relationship whereas on the page that character was written with more of a negative relationship. So when Alexie came and really lit up the room, it was hard not to fall in love with this girl. So the audience is going to fall in love with her, we thought the character should too. So we changed that storyline to be a more positive experience for the character. I think that ended up being a better choice, anyways.