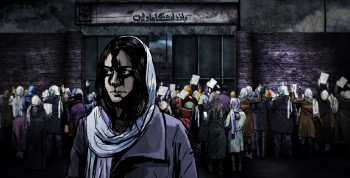 Well the biggest surprise was, that it worked out!

Really! Just imagine: Our goal was to make a film about a country we were not able to travel to anymore, about an event which had taken place in the past. Without having proper footage, we decided to produce 42 minutes of animation and mix them with real footage we got from 250 different cameras and cell phones. And all of that, from financing to finalizing the film within 10 months! That is a challenge I would say. And if the film works at the end of the day, well that is a big surprise!

Anyhow we tried our best. We worked really day and night to make the film, because we felt that it was our duty as human beings to raise our voice for all the people in Iran which are not able to do so. We hope we were in a way successful.