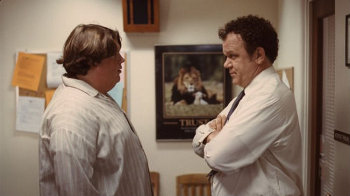 The biggest surprise, which is always the biggest surprise for me when I make a movie, is what things stay the same and what feels different. It’s never what I expect. Terri is the biggest story I have yet tried to tell, in size and scope, and it took more people, more money, more everything to make. Though it was great that people got paid, it was still tight in the ways that were familiar; there wasn’t money to be wasted and time was as precious as it always is, even more so when we only had a permit/location to shoot in a day. Instead of everyone having multiple jobs as it’s been in the past, there seemed to be a person designated for each piece needed to make the movie. This was probably the nicest surprise — having my only job be directing. Having a script supervisor to keep track of the things I always had trouble with in the past. What a luxury.

But it’s the similarities that are always the most surprising. That even with all these hands, means, skilled and experienced actors, it still felt handmade. It still felt like people were there to make something close to what I envisioned, to make something that they cared for, something they could call their own as well. The more directing I do, the more I think that my main job is just to surround myself with good people with similar intentions, that they in turn will bring with them more of the same, and so even if a story grows and it calls for many more people, the atmosphere can remain productive. With my past films, there was no other time in my life like when I was directing. It was one of the only times where I felt like I knew what I was doing, what I had to do. I looked forward to each day, was able to sleep well because I knew that I had done the best I could, and that I was gonna try to do better the next. In this respect, Terri felt just the same.