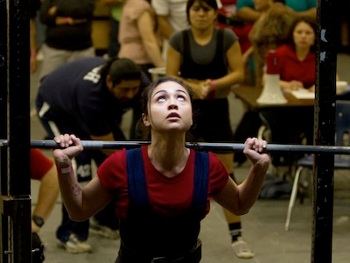 “Surprises,” wow. There were many in developing the story. Discovering this unique sport of women’s powerlifting and how big it is in South Texas was a wonderful surprise for us. We also had no idea that Texas had a mandatory and competitive “One Act” theater arts program. That program gave us an opportunity to survey a broad range of teenager talent, but more importantly, it is turning out graduates who are truly interested in storytelling and were eager to get involved in either script workshops or actual production.

As for production, you’re always trying to avoid surprises with meticulous planning and decision-making. They are definitely going to happen, though, and sometimes they can be great things. We cast several key roles based on things actors did in auditions that we hadn’t expected — decisions that broadened our idea of a character. Having filmed often in New York, we suspected we might get more cooperation in an area less jaded by film production, but had no idea how interested and supportive they would be. We had a police canine and handler, oil rig and major barn location all fall through at the last minute and had replacements for each within a matter of hours.

In the end, the biggest unexpected revelation for us is how our initial vision held up after years of toil, collaboration and so many variables that could have sent us in other directions. Filmmaking is such an incredible journey. Dan and I started years ago with an exploration of this small town, to words on a page, to more than 50 actors embodying these words, more than 200 extras filling the film’s world, a crew of 45 and so many others helping along the way. When we think about the number of decisions made in each phase of production, the errors, the accidents, and then we watch the final version, it’s an amazing surprise to see the final result actually surpass how we originally imagined it.

We knew how important all of our efforts were to clarify that vision before investing so much more in it, but it was still surprising to see how easily and often the vision could be compromised. The effort we spent clarifying that vision and the stamina to pursue the result doggedly probably speaks, more than anything else, to our method as filmmakers.