by Filmmaker Staff
in Sundance Responses
on Nov 9, 2011 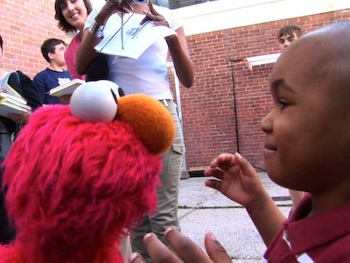 Originally posted on Jan. 23, 2011 as part of our annual question we ask directors attending the Sundance Film Festival. Being Elmo: A Puppeteer’s Journey is nominated for the Audience Award.

The most surprising thing I found while making BEING ELMO: A Puppeteer’s Journey was how insanely popular this furry red monster has become. For the past year I’ve carried a bright red Elmo messenger bag. I would get spontaneous feedback every day from almost everyone: old men, teenage girls, postal workers and especially mothers. Hundreds of times I heard, “Elmo was my child’s first word” or “What IS it about Elmo that makes my kid so transfixed?”

Sometimes though, the Elmo stories are startling. For example, I was on a long-distance bike ride and during dinner, one of the other riders asked about my work. I told him about making a film about Elmo and Kevin Clash, his creator and puppeteer. He turned to me and said, “I’ve got a story for you.” He told me that his daughter had died, and that she had undergone months of chemotherapy and clung to her Elmo for comfort. He showed me a picture of her gravesite with Elmo carved on the headstone from top to bottom. I swallowed hard.

Now, everywhere I go, I see Elmo dolls, balloons, shoes, food labels, watches and even diapers. A walk-around Elmo is a Times Square fixture in New York, as well.

It took a long time to make BEING ELMO: A Puppeteer’s Journey. But every day, my Elmo sightings push me forward and make me realize how happy I am to be making a film about a remarkable man, Kevin Clash.

Personally, I look forward to traveling with the film to see for myself, and Kevin has told me that in Japan, Elmo is unimaginably popular. And it’s the same in Australia and other places around the world. Elmo’s global popularity will continue to surprise me.