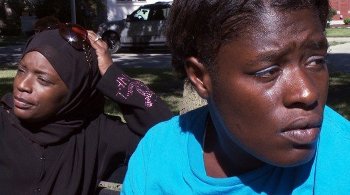 Making The Interrupters was, by its very nature, a series of hoped-for surprises: Producer Alex Kotlowitz and I wanted to be awakened in the middle of the night by a violence interrupter and told we should come quick to capture them dealing with a potential mediation. No such moment was more surprising than “Flamo,” a young man full of rage, making his entrance into our film by opening his front door and angrily flinging his cell phone out into the snow. He was on a warpath of revenge against this guy who “tricked on him” by calling the police to his house in search of illegal weapons. Flamo was by turns scary, funny, and eloquent — a character from The Wire comes to life.

However, the most profound surprise was this: We went in to make a film about how much urban violence had gripped Chicago over the course of a year, and expected it to be full of despair and pain and loss. All that’s there. Yet we came away with feelings of inspiration and hope that we never expected. These men and women who put their lives on the line every day reaffirmed how precious life is in communities that tragically too many have given up as lost. The Flamos of the world, we were surprised to learn, can indeed be saved.