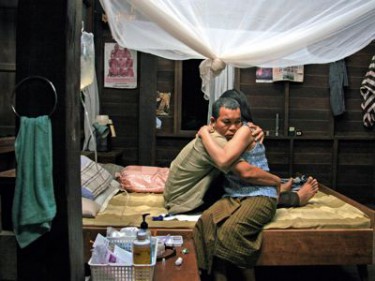 The 11th Tokyo Filmex opened with Apitchatpong Weerasethakul’s beguiling Uncle Boonmee, Who Can Recall His Past Lives (pictured left). The opening film set the tenor of the week to come — experimental, personal, willing to take chances. At the opening ceremony festival director Kanako Hayashi gave a shout out to the man who pretty much put Japanese film on the Western critical map, Donald Richie. All eyes in the audience turned toward the frail, but unbowed, man who graciously acknowledged the accolades. Over the last year the 86-year old Richie has been conspicuously absent from the film scene that he helped create, floored by age and illness. The fact that he appeared almost daily during the festival to watch films made the film-going experience for all a bit more profound. And when Abbas Kiarostami, who showed up for the Japanese premiere of Certified Copy, gave his kudos to Mr. Richie, one realized that the reach of this man and his writings were not only deep, but far.

Tokyo Filmex brought out the big guns guest-wise this year. Not only did Kiarostami show up, but the list of big names in international cinema included Weerasethakul (on the competition jury), Jaco Van Dormael, Hirokazu Kore-Eda, Sono Sion, Hou Hsiao-Hsien, Amir Naderi, Lee Chang-dong and a host of other young and rising directors whose works were represented in this small but well-curated selection of films. Once again, festival programmer Shozo Ichiyama walked the delicate line between arty festival favorites, hot new Asian genre flicks and new works by new talent. Not everything worked — the new Japanese films only batted at about 300 — but Filmex remains the only festival in Japan that one can say has a true personality.

In addition to the competition and special screenings, there was a small retrospective of friend-of-the-festival Amos Gitai’s work (including his new film, Roses on Credit) and as alute to the amazing ‘50s-‘60s director Minoru Shibuya. Eight examples of Shibuya’s finely crafted smart and cynical oeuvre were presented in crisp newly subtitled prints. For these Western eyes it was yet another filmic discovery from the very fecund post-war years in Japan — the type of programming that Filmex has excelled in over the years.

Perhaps the most interesting and audacious program, new to the festival this year, was the Next Masters Tokyo program. Twenty young Asian filmmakers, each with a feature film or two under their belts, spent the week in seminars, meet sessions and lectures with the big name directors invited and other international industry pros to workshop ideas, make connections and press the flesh with some of the best in business. Picking up on Pusan’s and Berlin’s development activities, Filmex has thrown its hat in the ring not so much in competition with but to augment other festivals’ activities in grooming and supporting new talent. The public and industry folks were invited to attend some of these talks. Of note was Amir Naderi’s performance piece/lecture/harangue in which he admonished the new crop of filmmakers to make films “from your heart, not your ass.”

The first few days of the festival began with a set of films, loosely built around similar themes, but with markedly different results. Weerasethakul’s Uncle Boonmee, Who Can Recall His Past Lives opened the week with a very personal essay where time, myth, personal and political evocations built a strangely moving and abstract piece of experimental cinema. One of the next day’s highlights was van Dormael’s Mr. Nobody. The visceral CGI-laden epic was non-stop display of directorial inventiveness and cleverness. With a rather insane garden of forking paths and multiple destinies, van Dormael pulled off an audacious, fun and somewhat light journey that reveled in nostalgia for lost love. The hero of the story manages to lose, find, lose again and rediscover at least three loves, with several possible variations of loss thrown in for good measure. Perhaps more intriguing, though more uneven, was Malaysian director Tan Chui Mui’s A Year Without Summer. The film begins like a tropical L’Avventura and, about midway, begins to deconstruct its mythic, psychological and narrative underpinnings in an abstract and beautiful trajectory.

Other highlights included Kazuhiro Soda’s Peace. Soda’s made a couple of successful Wiseman-like documentaries on Japanese social institutions, Campaign and Mental (about a mental health clinic). With Peace, Soda turns the camera on his in-laws — both involved with public service for the physically challenged and the elderly. There’s also a story about cats and the 90 year-old Shiro Hashimoto that brings the big theme, peace, to the human and feline scale. Bing Wang’s The Ditch was a well-made and moving piece of miserablism that shined a light of moral outrage and witness to a particularly dark side of China’s contemporary past. Certified Copy, a bit of a known quantity, was exceptional for Kiarostami’s first film outside of Iran and for Binoche’s performance. And the closing film, Poetry, confirms Lee Chang-dong as, if not the best, at least the most human filmmaker working in South Korea now. His story of an old woman dealing with her grandson’s huge moral transgression in a town where most want to cover it up and make it disappear has gained deserved kudos. Lead actress, Jeon Do-yeaon won the best actress award a Cannes this year for her heartbreaking performance as Mija, the grandmother in question. 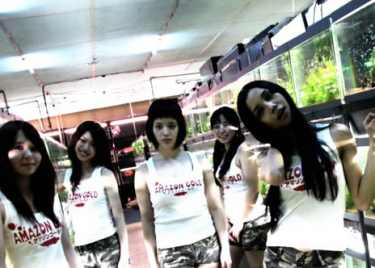 Much anticipated was the Japanese premier of Sono Sion’s Cold Fish. Two years ago at Filmex he premiered his four-and-a-half-hour epic, Love Exposure — a tough act to follow. His most recent provocation, Cold Fish proved to be more problematic. Sion’s anarchic nihilism of past films joyfully sent up most everything society holds sacred. His new film moves toward a more fascist nihilism, daring the audience firstly to like it. Torn from the tabloid headlines, Cold Fish follows the bleak downfall of Shamoto (Kagurazawa Megumi) a meek tropical fish store owner taken under the wing of Murata, a madly rapacious and much more successful capitalist. The great comic, Denden, plays the role of Murata, a free-market capitalist gone to the most black and logical of ends. Even as he dismembers former business collaborators and enemies and, in one astounding scene, hectors Shamoto to man up and fuck his own (Murata’s) wife, he remains grotesquely likeable. Devolving into a gorefest with ample amounts of misogyny and audience abuse thrown in for good measure, one wonders if Sion is becoming the sort of monster that he so wonderfully sent up in films like Suicide Club.

Fimex wrapped after eight days with an emotional awards ceremony. Again, tribute was paid to Richie, with big hopes that all would see him again at next year’s fest. A Special Jury Prize went to Hao Ji for his highly personal directorial debut, A Single Man. Hao Ji gave a simple and moving salute to his father who passed away during the shooting of the film. There were no dry eyes in the house. Kazuhiro Soda won the audience award for Peace, deservedly so. The Grand Prize went to Nobuteru Uchida for his film Love Addiction, a no-budget psychological drama, that by no means perfect, hints at a new talent in the Japanese film scene.
Filmex delivered this year with a who’s who of international filmmakers, many open to late-night drinking and karaoke sessions and an intriguing selection of new work, not all perfect, but in search of new talent. With the addition of the New Masters program, Filmex itself will be developing some of that very talent.