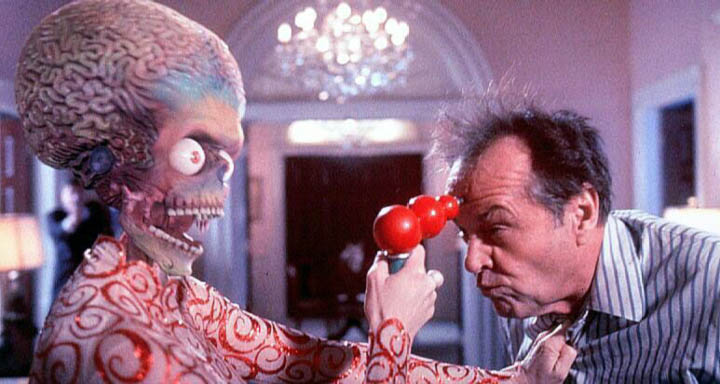 The appearance of a fictional version of the President of the United States is a hallmark of many genre films, particularly of the earthly disaster variety, in which the impending destruction of the planet, or at least the country warrants a visit from our Commander-in-Chief. In some cases, the character is a way for the filmmaker to get into some mild politics, to take a sly jab at a particular administration through spoofing or lampoonery. In other cases the POTUS depiction has an element of wish fulfillment, in which the filmmaker projects his ideal leader in a crisis situation. Like its problematic advancement of women as action heroes in the 70s, genre film also likes to play with expectations of how a president should look and behave. Black presidents both good and evil were milling about prophetically in genre in films like Deep Impact or on the television show 24 long before the election of Barack Obama. Now that we’ve checked that one off the real-world list, female presidents, like Laura Roslin in Battlestar Galactica, seem to be on the rise.

In honor of the 4th of July, this week’s Lady Vengeance column is dedicated to US presidents in genre film. After all, fanboys and fangirls are bound to enjoy warm beer, charred meats, and explosive fireworks as much – if not more – than any other red-blooded American.

Yes, this film is a huge Hollywood blockbuster, but it’s about the earth defending itself against an alien invasion with the help of the Fresh Prince of Bel Air, so as far as I’m concerned it counts. Here, Bill Pullman is absolutely everything Americans want out of a president; a quiet, down-to-earth kind of guy who also turns out to be a former fighter pilot and rousing speech-giver. If you’re longing for more heroic presidential appearances in big Hollywood doomsday pictures, see also: 2012, Deep Impact, The Day After Tomorrow, Meteor, and Armageddon, to name a few.

Released in the wake of the Independence Day madness, the alien-attack spoof Mars Attacks! bombed at the box office but continues to enjoy cult classic status for its kooky sense of humor, unapologetically over-the-top CGI alien creatures, and embarrassing (for her) use of Natalie Portman. Jack Nicholson plays an appropriately kind yet smarmy Commander- in-Chief who continues to try and make friends with the invading brainiac alien race despite all of the evidence that their intentions are violent. One has to wonder if this is an indictment of excessive mitigation tactics, as the hapless James Dale ends up stabbed in the back with an American flag for all his peace-making efforts.

While she may have initially gotten the job because she was the only remaining member of Cabinet after most of the human race was obliterated by the evil robots known as Cylons, the many superfans of this long running Syfy (god I still hate giving in to the network’s revisionist spelling) show know that in the end Roslin really sacked up to take on the leadership of a flagging race. Sometimes to an unnervingly intense degree. It’s worth mentioning that McDonnell played the first lady in Independence Day, so boo-yah on the promotion, lady.

Despite the insanely sophisticated, technologically advanced, poly-cultural hyper-world of Luc Besson’s sci-fi apocalyptic drama, this president seems to rely solely on intimidation and brute force. Lister, best known for his role in Friday, has the intellectual wherewithal to deploy Milla Jovovich’s earth-saving-weapon-in-alien-form, but does so with a preponderance of thuggish stare-downs and menacing words. Like Chris Rock, in the role of his lifetime as a cross-dressing media personality, Lister is typecast but offered a satisfyingly unexpected twist.

This more recent rotoscoped sci-fi B-movie about a group of astronauts discovering life on Mars was tonally strange, visually playful, and completely underrated. Indie filmmaker Mark Duplass may have lent a voice to one of the main characters but for many Texans the more exciting casting was that of local celebrity Kinky Friedman as a sassy, swearing cowboy of a US president. Despite being more of an entertainment personality, Friedman apparently does harbor some political dreams; he ran as an Independent candidate for governor of Texas in 2006, but lost the election to Republican incumbent Rick Perry.