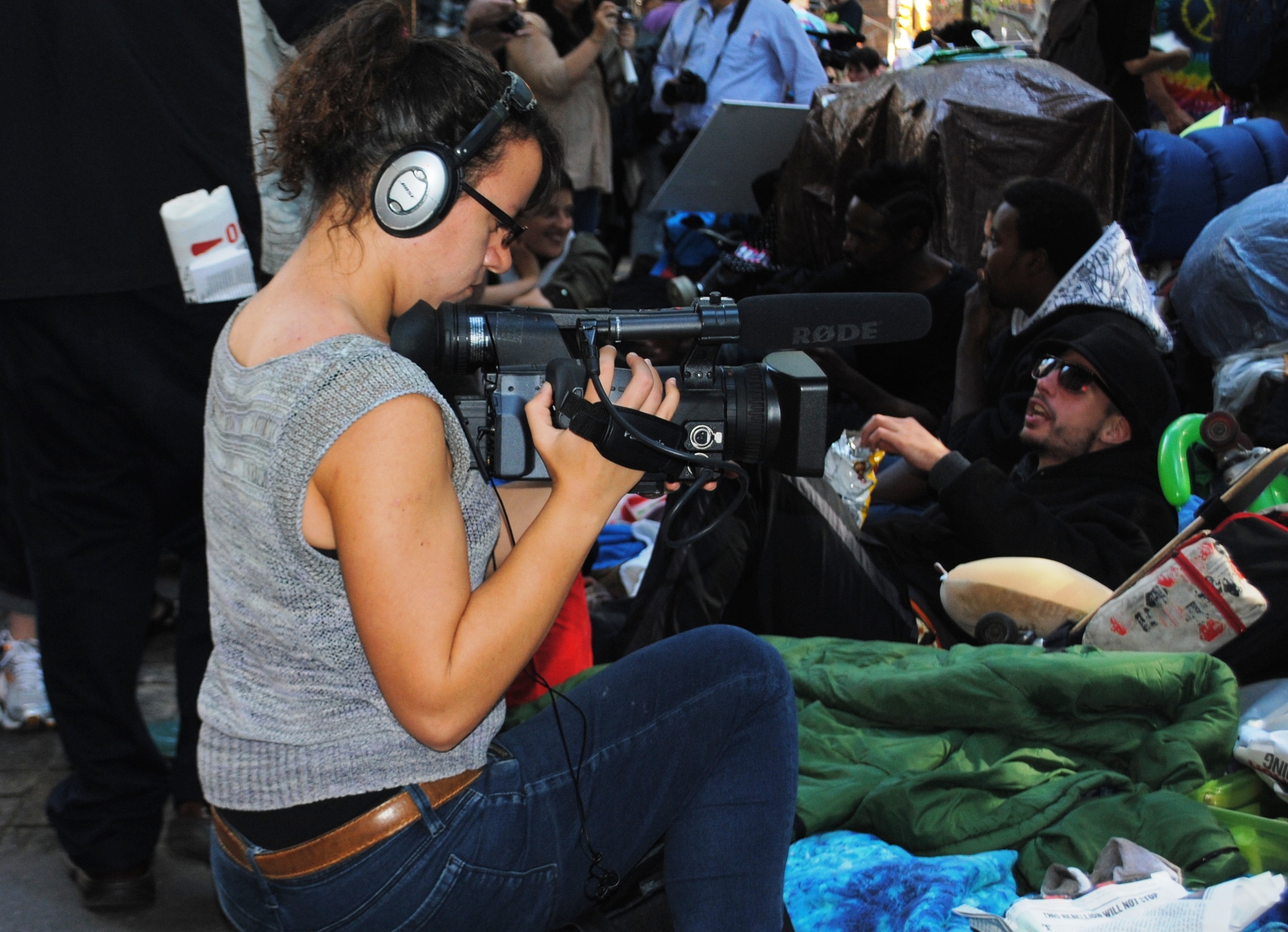 by Stewart Nusbaumer
in Filmmaking
on Oct 10, 2011 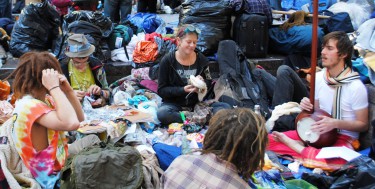 I meet-up with documentarians Audrey Ewell and Aaron Aites in downtown New York, they introduce me to Joanna Arnow, and Joanna and I are off to Liberty Plaza.

Two streets north of Wall Street — in the former shadow of the World Trade Center towers — Liberty Plaza Park was created in 1968, renamed Zuccotti Park in 2006 for a real estate baron, and then renamed back to Liberty Plaza a few weeks ago by the Occupying Wall Street protesters. The park is one long block long and one short block wide, paved in stone with several colorful flower beds, ringed by New York office towers, and is now the epicenter of the Occupy Wall Street movement … headquarters and camping site for an America, after decades of politically snoozing, is suddenly waking up.

A native of Brooklyn and graduate of Wesleyan University, Joanna Arnow (doc shorts The Power of the Spoon, and Eiko & Koma: The Retrospective Project) is one of 40 film shooters for 99 Percent: The Occupy Wall Street Collaborative Film. It is a cooperative documentary project of independent filmmakers – directors, producers, editors and cinematographers, professionals and amateurs — who are documenting the quickly expanding grassroots protest movement in New York and across the country. 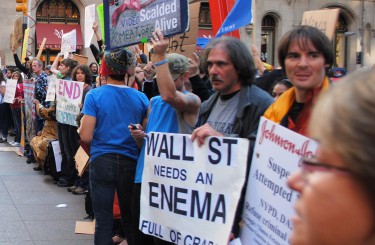 Joanna dashes across Broadway, and using a Panasonic AG-HMC 150, she films a line of demonstrators on the sidewalk facing Broadway. Soon we’re plunging into the packed Liberty Plaza, taking a few tiny steps at a time, weaving around and squeezing through protesters, protesters lounging on their sleeping bags among large plastic bags, protesters simply milling around, and a ton of visitors, curious and supportive, some of whom will probably remain through the night. Nearly everywhere there are simple cardboard signs; one against a tree says, “I’ll Believe Corporations Are People When Texas Executes One.” A woman holds a sign that proclaims, “This is bullshit.”

More than a center for a protest, renamed Liberty Plaza is the site of a community. One that is currently in the nation’s spotlight and needs to be documented for today and tomorrow.

We inch past Lost & Found and are handed the movement’s newspaper, The Occupied Wall Street Journal. On the right is Media where numerous staffers are hacking away on computers; ahead is the Kitchen where a crew is preparing food. Joanna shoots a group of protesters — one sleeps while others chat. There are rumors the police will harass them tonight, and there are rumors the police will not harass them tonight. Joanna and I inch past the Medical Station, then the Welcome Desk, with its posted schedule of events, and arrive at the far end of the plaza where a group of musicians are playing while a dozen or so people dance, their arms flinging and hips rolling to the heavy beat of the music. Joanna shoots them.

To our left stands a solemn “Veterans for Peace” contingent, to our right protesters with a slew of signs — a middle-age man’s sign: “I’m not lazy, you’re just greedy.” Joanna twists her body for a shot, goes to one knee, is now squeezing through a thick wall of bodies. A blue flag waves above the crowd: “Revolution Generation, Debt Is Slavery.” A sign proclaims its simple identity, “This Is A Sign.” 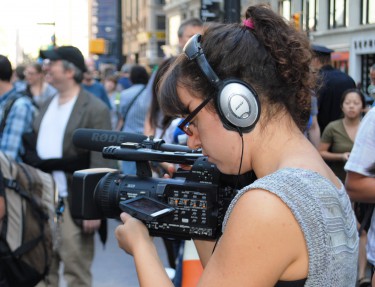 Before joining the Occupy Wall Street collaborative film project, Joanna had already been filming the movement. She was on the Brooklyn Bridge last week when some 700 demonstrators were arrested and a few days later at a rally joined by union members. “Then I heard about this cooperative project through a friend, who had heard about it from someone else. Since the Occupy Wall Street movement is communal in nature, it made sense to join forces in making a documentary about it. It’s such a multi-faceted story that I think it will be helpful to have many filmmakers working on this.”

We join the afternoon march from Liberty Park to Washington Square Park, a two-mile hike in the unseasonable warm weather. After collecting shots of the long line of protesters stretching for several city blocks, we hop on the subway enabling us to meet the marchers as they enter Washington Square Park, site of many past police-protester conflicts. 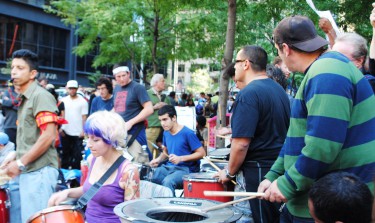 As Joanna shoots the “General Assembly” in Washington Square, I meet up with the organizers of The Occupying Wall Street Collaborative Film, documentarians Audrey Ewell and Aaron Aites (Until The Light Takes Us).

“The genesis of this film project,” Audrey elaborates, “[was that] I was home watching live stream coverage of what was happening on the Brooklyn Bridge, the madness, the arrests, and suddenly it was cut-off. The camera’s battery ran out. I was totally into what was happening, and then it was gone! I searched the TV channels, ABC, CBS, NBC, but nothing. Absolutely nothing!”

Audrey continues, “we want to make an honest portrait of this movement that reflects the multitude of voices.”

A week ago last Saturday after the Brooklyn Bridge mass arrests, Audrey and Aaron snapped into action. They contacted friends who are filmmakers, who in turn contacted their filmmaker friends, and soon word was spreading and filmmakers were joining in the effort to document the movement.

“Right now I have several hundred emails unopened on my computer,” Audrey sighs.

“She hardly slept for a week,” Aaron adds.

“Anyone with footage of the movement,” says Audrey, “who has a camera, has stills, or has a desire to just help, please contact us!”

All the footage shot will be available on the community YouTube and from this will be culled a feature documentary film that will be about about the Occupy Wall Street in New York and and around the country.

A woman walks by, “I Love Class Warfare,” followed by another sign, “Compassion Is Our Currency.” Audrey and Aaron slip into the crowd of protesters in Washington Square Park, after saying that next Saturday, October 15, will be a big event day. They need many more participants to film the events throughout the country.

If you have a camera, any camera, and desire to shoot protest events and encampments in your area, contact Audrey and Aaron at contact@99percentfilm.com. And here is the Kickstarter Page.