BE KIND REWIND EXHIBIT AT DEITCH 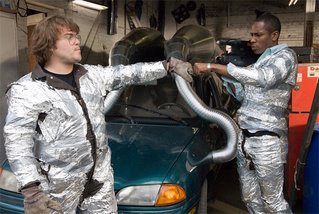 Though Michel Gondry‘s latest highly imaginative film Be Kind Rewind, which is the cover story of our current issue, isn’t out in theaters for another two weeks, beginning this weekend you can be like Mos Def and Jack Black in the film and create home videos of some of your favorite films (or as they call it “swede”) when Deitch Projects in New York City brings the video store from the film to their gallery. Here’s more from their press release:

For the exhibition, Michel Gondry will be recreating the video store in the gallery, complete with a back lot containing a variety of movie sets where visitors can make their own renditions of films. All videos created during the exhibition can be viewed in the gallery. About the project, Gondry states, “I don’t intend nor have the pretension to teach how to make films. Quite the contrary. I intend to prove that people can enjoy their time without being part of the commercial system and serving it. Ultimately, I am hoping to create a network of creativity and communication that is guaranteed to be free and independent from any commercial institution.” The exhibit ends March 22.

ONE MORE THING: The Be Kind Rewind Website is also a lot of fun. Be sure to check out the trailer and then Gondry’s sweded version, you can also swede yourself into movies.